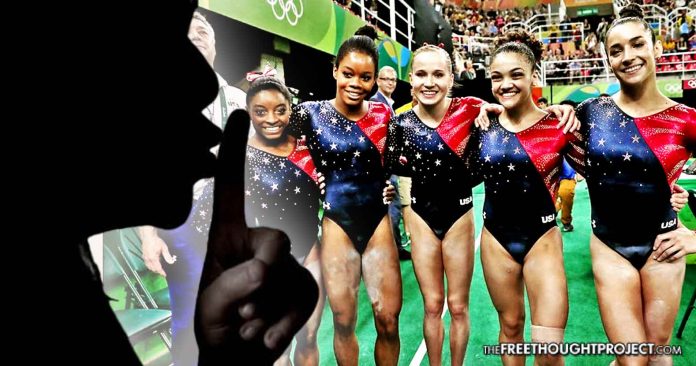 Nearly 100 women will read victim impact statements this week, sharing their accounts of the horrific sexual assault they endured when they were young girls, at the hands of Larry Nassar—and in doing so, they are also revealing that USA Gymnastics enabled the predator.

“You failed all of us, and for that, I see you in the same category of criminal as I do the criminal standing before us today,” Olivia Cowan said in court on Tuesday, addressing the roles of USA Gymnastics and Michigan State University in allowing Nassar’s abuse to continue for decades.

Cowan accused the organizations of ignoring numerous complaints about Nassar’s conduct and noted that they have still refused to take responsibility for their role in the abuse, claiming they were never alerted to Nassar’s serial abuse.

“Today, I am a mother, a wife, a daughter, a friend that is struggling each day to find peace and joy in all the things that once made me happy,” Cowan said.

The long-term effects stemming from Nassar’s sexual and psychological abuse were also brought to light in court. Donna Markham spoke on behalf of her daughter Chelsey, who took her own life after a confession about Nassar’s abuse—that occurred in the doctor’s office, while her mother was in the room—drove her to a path of depression and drugs that led to suicide.

A total of 140 women have publicly revealed that they were sexually assaulted by Nassar, and some of the most notable victims include Olympic gymnasts McKayla Maroney, Aly Raisman, Gabby Douglas and Simone Biles.

Maroney, 22, was originally facing a $100,000 fine if she testified in court against Nassar, after she signed a non-disclosure agreement as part of her settlement with USA Gymnastics, according to a report from The New York Times.

The settlement was finalized in December 2016, and it left Maroney with $1.25 million. However, she is now suing USA Gymnastics, the US Olympic Committee and Michigan State University claiming that she was forced to sign an illegal NDA preventing her from talking about her abuse and that the three organizations enabled Nasser’s actions despite numerous complaints.

“During the period McKayla Maroney was being sexually abused and harassed by Nassar, Defendants had the authority and ability to prevent such abuse by removing Nassar from his position as team physician at Team USA, USAG and in his status with the USOC. They failed to do so, allowing the abuse to occur and to continue unabated.”

Maroney’s lawsuit claims that she “was forced to agree to a non-disparagement clause and confidentiality provision,” and that she would be fined at least $100,000 if she was ever to “speak of her abuse or the settlement.” The lawsuit also claimed that Maroney accepted the money because she needed the funds to seek treatment for the psychological damage caused by Nassar’s abuse.

Maroney’s lawsuit claims that USA Gymnastics “had a plan to keep the sexual abuse of Nassar quiet, and allow Nassar to quietly leave USAG, and further silence his victims.” It also alleges that Nassar has possession of thousands of photographs he took of Maroney, and he has shared them with other pedophiles.

“Nassar would continuously, obsessively and compulsively photograph McKayla Maroney and is believed to have possessed thousands of photographs of McKayla Maroney competing in gymnastics events, training, in everyday situations.

Maroney did speak out about the abuse she endured from Nassar in a post on Twitter in October. She said Nassar began abusing her when she was 13 years old and did not stop until she left the sport when she was 20. She said the worst incident happened when she was 15, and Nassar gave her a sleeping pill and then sexually assaulted her during a trip to Tokyo for a world championship.

“Dr. Nassar told me that I was receiving ‘medically necessary treatment’ that he had been performing on patients for over 30 years,” Maroney wrote. “It seemed whenever and wherever this man could find the chance, I was ‘treated.’ It happened in London before my team and I won the gold medal, and It happened before I won my silver.”

Following intense criticism of the non-disclosure agreement on social media, USA Gymnastics has announced that it will not fine Maroney if she speaks out about Nassar’s abuse.

Nassar is now facing life in prison, and as The Free Thought Project reported in August 2017, the current policies used by USA Gymnastics are only helping to enable sexual predators like Nassar:

“What these former victims are exposing is also backed up by an investigation by the IndyStar which revealed that top executives at one of America’s most prominent Olympic organizations failed to alert authorities to many allegations of sexual abuse by coaches — relying on a policy that enabled predators to abuse gymnasts long after USA Gymnastics had received warnings. According to the investigation, USA Gymnastics would not disclose the total number of sexual misconduct allegations it receives each year. But records show the organization compiled complaint dossiers on more than 50 coaches and filed them in a drawer in its executive office in Indianapolis.”