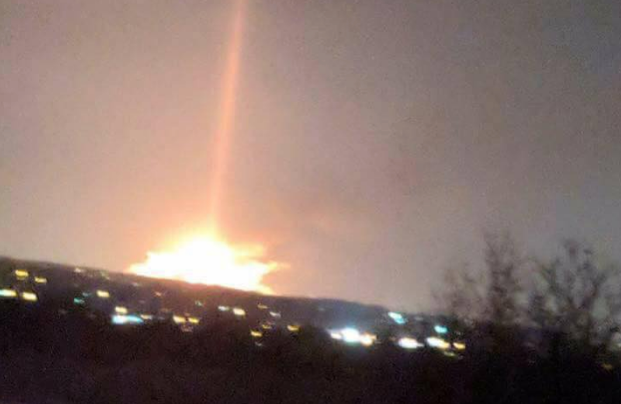 WASHINGTON TOWNSHIP, Mich. (INTELLIHUB) — What looks like some sort of air or space-based beam weapon was captured on film emitting down from the sky Tuesday night, causing a massive explosion.

Various press agencies, like the Washington Post, and government agencies like the Department of Homeland Security, the USGS, and NASA chalked off the event as a meteor strike. However, the pictures tell a different story.

The photos were captured by Kurt Norris.

Take a look for yourself. Does this look like a meteor to you?

Residents came outside to look at all of the commotion.

Here’s a screenshot of the meteor NASA claims entered the Earth’s atmosphere around 8:08 p.m. on Jan. 16.

It was not a meteor that caused the ground-based explosion captured in the Kurt Norris images because you can clearly see that the meteor fizzled out with only a small air-burst.

The Air Force has been placed on high-alert.

The explosion caused a 2.0 magnitude tremor in the vicinity of Saint Clair Shores.

Similar events have been reported during the so-called ‘California wildfires.’

Tyler from the “secureteam10” YouTube channel does a great job explaining what occurred Tuesday night.

The media also ran an aparant cover story of a ‘vehicle fire’ in a residential neighborhood.