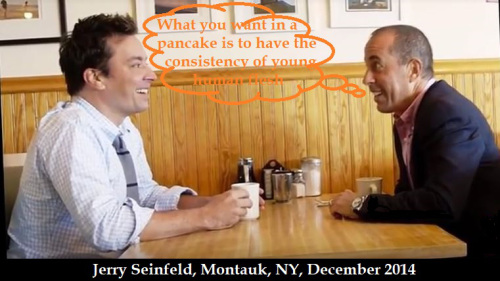 Comedians in Cars Getting Coffee is a web series talk show directed and hosted by actor-comedian Jerry Seinfeld, which premiered on July 19, 2012, on digital network Crackle. In 2018, after nine seasons on Crackle, the show moved to Netflix. Episodes feature Seinfeld introducing a vintage car selected for a guest comedian, followed by a drive to a pre-selected café or restaurant for coffee.

Seinfeld’s guest in the last episode of Season 5 of Comedians in Cars Getting Coffee, which was released on December 18, 2014, was late-night TV talk-show host Jimmy Fallon. Seinfeld took Fallon for breakfast to John’s Pancake House in Montauk, New York. Fallon ordered a plate of pancakes and a side-order of bacon; Seinfeld ordered a plate of bacon and eggs. Seinfeld said to Fallon (1:15 mark in the video below):

“What you want in a pancake is to have the consistency of young human flesh. You were the guy with the brightly colored undergarments, and you’ve got soft human flesh in front of you.”

Fallon poked his stack of pancakes with his finger, then grinned and laughed, because, you know, cannibalism of little children is just sooo funny.