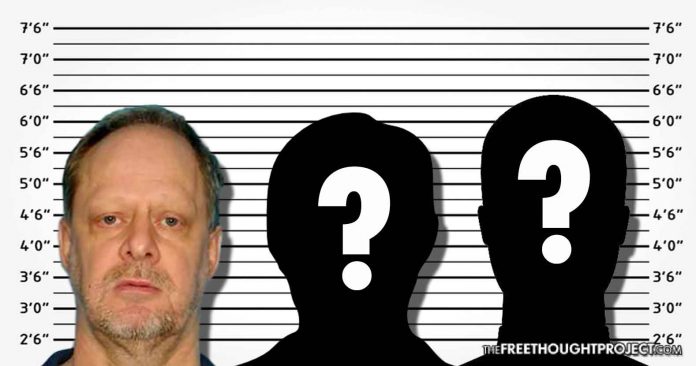 Las Vegas, NV — It has been months since the worst shooting in modern history was carried out in Las Vegas and Americans have been lied to, led astray, and essentially kept in the dark as to what went down that tragic evening. Official narratives have shifted like the tide and despite dozens of lawsuits and media requests, very little information has been conceded by authorities—until now.

Three months later and Las Vegas Police have yet to even release a still image of Stephen Paddock inside the Mandalay Bay Casino and Resort. Police haven’t even released the type of gun Paddock used in the massacre.

The utter secrecy surrounding the case has some diligent local media pressing the police, and this week, some of that pressure has paid off.

As KVVU reports, inside a district courtroom on Jan. 16, a lawyer for multiple media outlets argued why information pertaining to 1 October is crucial to helping Las Vegas heal, but the lawyer for Metro Police said they can’t release any information because there are still suspects being investigated.

“Without naming names, there are potential charges against other people, because of the ongoing investigation?”, District Court Judge Elissa Cadish asked Metro’s Lawyer Nick Crosby.

“Yes there are charges being investigated,” Crosby replied.

This new revelation that Paddock may have had help or that other people may have had foreknowledge of the attack is nothing short of bombshell as they may be able to help in providing a motive, or at the very least, give a little insight into what actually happened that night.

According to KVVU, Metro police maintain because of possible new suspects they should not have to release anything pertaining to the obtaining of the search warrants or any evidence seized because of them.

Naturally, this left the media and attorneys for the victims with more questions than answers.

“Are they investigating obstruction of justice? Lies to Metro under oath from Mandalay Bay employees? Is it people who sold [Paddock] the guns or ammunition? Or did someone have knowledge of what he was going to do? Now [Metro Police] are just having us speculate more and more and more,” Craig Island, an attorney for some of the victims said.

When asked how long it may take for police to release any information on the possible suspects, Metro’s lawyer responded, maybe 60 days. Reporters also pointed out the fact that the admission of multiple suspects entirely contradicts the official narrative.

“Today is the first time we’ve heard there are additional suspects out there, this contradicts what they have been saying, [Sheriff] Lombardo has said there are no other suspects,” Maggie McCletchie, a lawyer for the media outlets said.

McCletchie argues Metro has had three months to show they are still investigating, and that there are in fact other suspects, and said enough is enough; the public has a right to know what happened, according to KVVU.

“There are important therapeutic effects of getting information out there after a tragedy,” she said. “The public has a right to know and shouldn’t just have to rely on what the sheriff and other law enforcement is saying.”

Metro police told the judge that telling the public why they can’t release the information would be damaging to the investigation. Judge Cadish, finding middle ground, gave Las Vegas police until the end of next week and noted that she would decide by then whether or not the information related to the search warrants for additional suspects will be released.

Media attorney McCletchie says that this is still too long as the victims have a right to know—now.

“The public has a dire need to know what happened on 1 October,” McCletchie said.

Interestingly enough, this information comes days after Joe Lombardo addressed the media and told Americans to forget about Vegas and move on.

“The frustrating thing for me as the head of the law enforcement is the keyboard bandits the guys who sit at their couches at their home and Monday morning quarterback everything you do and that are smarter than you. The pressure that we are put under to do the right thing and I believe we did the right thing and I am not hiding anything from anybody. You know what I know. The reason why I say that it is just as important for you to be comfortable living here and have an understanding to prevent another event from taking place, for you to know what exactly happened. So, you know what exactly happened so far. I anticipate a press conference here in about a week to give you more information and to provide the media with more information associated with that event. But there will not be a keystone or an important piece associated with Mr. Paddock and why he did what he did, so it’s important for us to forget that and move on and be resilient.”

Well, Lombardo, the families of the victims who want to know why their mother, father, son, or daughter was murdered that night have no plans of ‘forgetting.’ The pressure will continue to mount until the public knows everything you have been keeping under wraps.