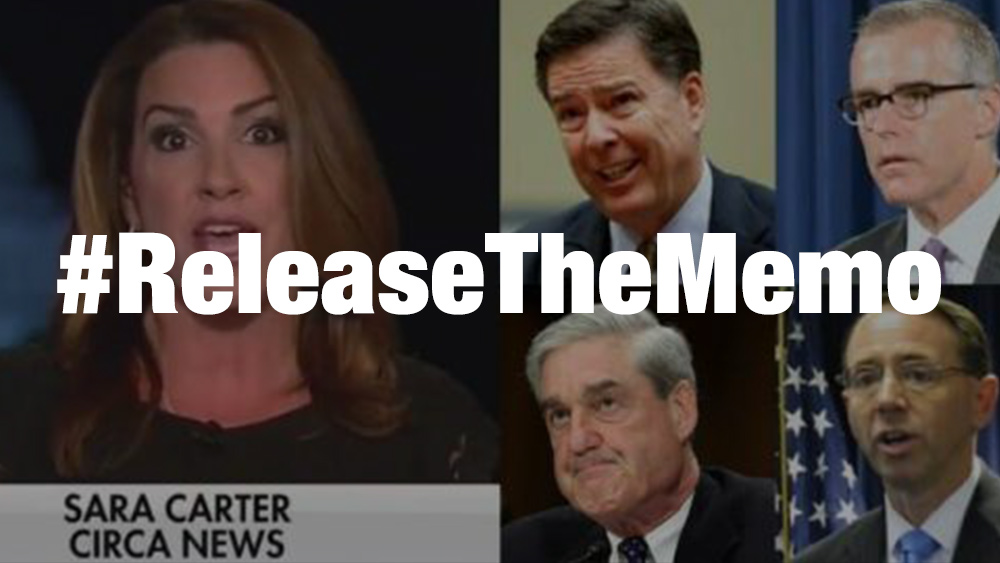 (Natural News) While the entire legacy media is running a complete news blackout on this exploding scandal — now shaping up to be the most horrific political crime in the history of this nation — Americans are demanding federal officials #ReleaseTheMemo so that people can see for themselves what really happened.

The magnitude of this scandal is off the charts. It makes Watergate look like child’s play. According to numerous sources (see below), this scandal reveals how Obama, the DOJ, the FBI and the Clinton campaign all conspired to fabricate false “intel” to justify illegal spying on their political enemies (the Trump campaign). In other words, the U.S. intelligence community tried to steal an election but failed, and now they’re all about to be exposed (and go to jail).

As you might have expected, the entire corporate-run media system is refusing to report anything about this story. But independent reporters like Sara Carter (Circa News) have been relentlessly pursuing the truth, and Sean Hannity has led the way on publicizing the details even as the legacy media tries to keep Americans in the dark.

Tweet the hashtag #ReleaseTheMemo to join the chorus of those demanding full transparency. Also trending now is #Obamagate, as this scandal goes all the way to the top of the corrupt Obama administration.

What follows here is a collection of shocking headlines on must-read stories that detail the astonishing scale and scope of this criminal conspiracy. Read up on this and you’ll know why the Democrats are screaming so loudly about the “government shutdown” as a pure distraction strategy. The Gateway Pundit is probably the No. 1 site covering all the breaking news in near real time.

“I Can’t Believe They Did That!”: Rep. Ron DeSantis Stunned By FISA Memo, Reveals Its “Central Theme” (VIDEO)

Rep. Mark Meadows UNLOADS On ‘Absolutely Shocking’ FISA Memo: I Thought This ‘Would Never Happen in a Country That Loves Freedom!’ (VIDEO)

HANNITY TELLS MUELLER: ‘YOUR WITCH HUNT IS NOW OVER’

Breaking: Rep. Gaetz: Memo Will Be Released Soon – Laws were Broken – Heads Will Roll in DOJ and FBI – #ReleaseTheMemo (VIDEO)