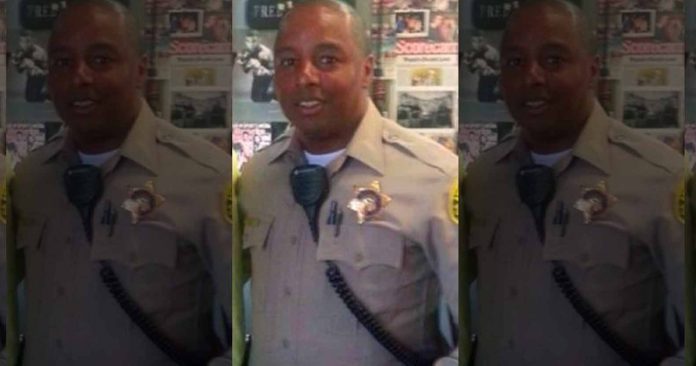 Los Angeles, CA — Kenneth Collins, a 15-year veteran of the Los Angeles County Sheriff’s Department, was arrested this week in an undercover FBI sting operation. Collins, along with three alleged accomplices were arrested and charged this week with conspiracy to distribute controlled substances.

It turns out the drug traffickers were actually FBI agents who informed Collins they would be transporting nearly 45 pounds of cocaine and more than 13 pounds of methamphetamine. Arrested with Collins are David Easter, a 51-year-old Hyde Park resident; Grant Valencia, a 34-year-old from Pomona; and Maurice Desi Font, 56, of South Los Angeles.

In the past, Collins used to mentor ex-convicts through a program called “Emerging Leaders.” Now the career cop is forced to confront the possibility he, too, may spend time behind bars.

According to KTLA, Collins had been rumored to be a dirty cop, often accepting bribes in exchange for protecting drug dealers and their operations. The FBI investigated, set their trap, and caught their badge-wearing criminal who was believed to be the “ring-leader.”

He apparently bragged to the undercover FBI agents he could also arrange beat-downs in exchange for cash as well.

On Tuesday, Sheriff Jim McDonnell announced the arrest and stated Collins would be suspended without pay pending the outcome of the investigation. In a separate statement, the Sheriff’s Department called on the public to not allow the arrest to overshadow their belief in the department as a whole. The statement reads in part, “As outraged as the public may be over these accusations, I guarantee you the men and women of the Sheriff’s Department are twice as upset.” — Except for the ones who were in on the scam…

Collins believed he would be getting $250,000 in exchange for providing a police escort for the transport vehicles. He even bragged according to the criminal complaint that “he has transported even greater quantities of controlled substances in the past and is trusted by large-scale drug traffickers.”

It’s unclear whether or not the braggadocious officer was actually involved in security/trafficking operations throughout the state of California but he claims to have been providing security for drug running in LA, San Bernardino, as well as Lancaster.

Equally disturbing to some may be Collins’ claim the other men were also law enforcement officers. Valencia is a convicted felon, Easter is not, but Font’s affiliation with law enforcement remains unclear.

Collins was first contacted in August by an undercover agent posing as a wealthy investor interested in setting up an illegal grow house. Collins offered to facilitate the sale of $4 million worth of marijuana each month. Collins reportedly told the undercover agents:

by virtue of being a law enforcement officer, (he) was better equipped and adept at thwarting the detection of law enforcement…’We’re cops…All of our transports make it through’

Collins took cash from the undercover agents for various odd jobs. In addition to the $5000 good faith money they gave him for security protection, they also paid him $2000 to locate a man with which the undercover said he was having “issues.” That money was likely given to Collins to get him to use the police department’s computer system for personal gain.

United States Attorney Nicola T. Hanna described the arrests as an effort to, “root out corruption, particularly when it involves sworn law enforcement officers.” Hanna said in a statement, “Deputy Collins sold his badge to assist an individual he thought was a drug trafficker.”

The successful sting operation to arrest a dirty cop comes amid several high-profile cases involving law enforcement officers. In May, ex-LA County Sheriff Lee Baca was sentenced to three years in jail for interfering with an FBI investigation involving alleged jail abuses of inmates by corrections officers. And in June, LA police officer Robert Cain was arrested and charged with multiple felonies including having sex with a teenage member of the police explorers program.

Hopefully, the FBI won’t stop with Collins but will also turn its attention to sex trafficking of minors by police officers. As TFTP reported Jasmine Abuslin was trafficked throughout at least seven police departments in the Bay Area. Along with her lawyers, she has successfully sued and won settlements and is taking down those departments one by one. The FBI should be bringing charges against those officers, but to date, no officer has been criminally charged for having sex with Abuslin.