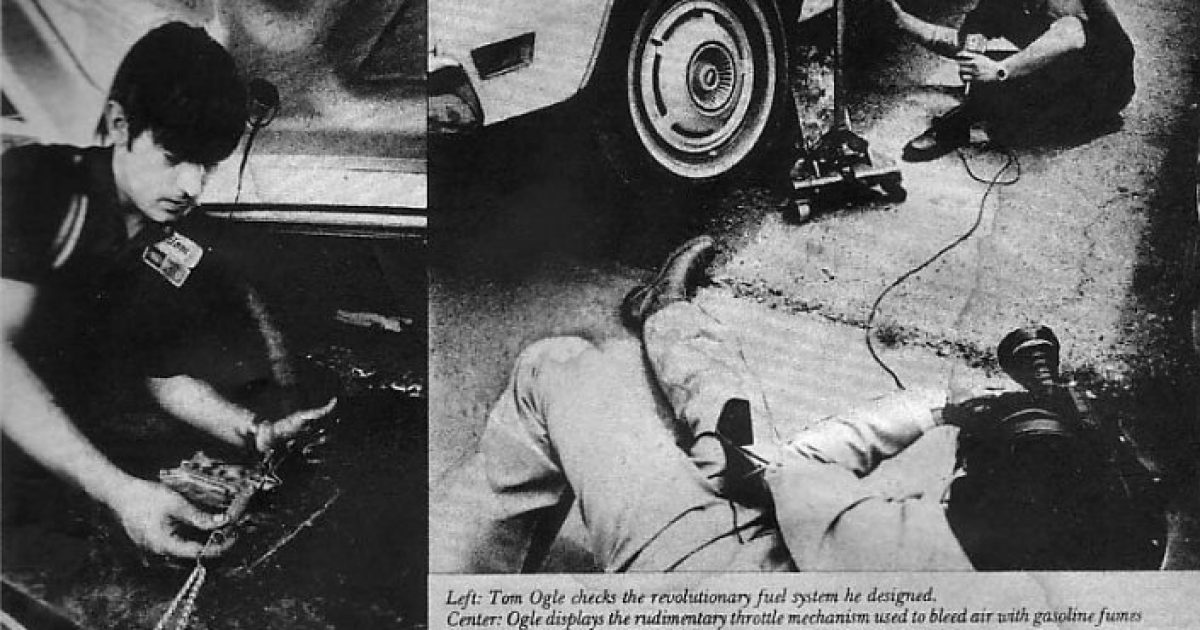 Many people will be familiar with the story of Tim Ogle.  Ogle invented a device in 1977 that could go on any car and provide the owner with an automobile that could get 100 miles per gallon with zero carbon emissions.

Now that, is revolutionary and it makes me wonder why no one actually ever went on to develop his product, but I think we all know the ultimate reason, don’t we?

In any case, I ran across this story from Jay Syrmopoulos at The Free Thought Projectand thought I would share it with you because I think it is that important.

If we could develop this now on a large scale, using the internet and people could put these on their cars, not only would they save big money at the gas pump, but they could shut the mouths of the Communists, globalists and maniacal Greenies that want to tax our carbon footprints.

While some people believe the story of American inventor Thomas Ogle is a myth or urban legend, the reality is that Ogle designed and implemented a “vapor carburetor” that allowed a vehicle to achieve over 100 miles per gallon of gasoline in 1977—with no carbon emissions.

Sadly, Ogle’s invention would never see the light of day.

“Are you afraid of oil companies or the Arabs coming after you?” journalist Ron Laytner presciently asked Ogle in 1978—three year prior to his death.

“No. Not any more. I’ve had too much publicity. If I’d kept my invention a secret I might be worrying. But there’s nothing to worry about any more,” said Ogle.

The saga began on April 30, 1977, as Ogle unveiled his invention to the world in a consumption test using a 1970 Ford Galaxie, which unmodified achieved roughly 13 miles per gallon. The test saw the inventor drive a journalist 205 miles on just two gallons of gasoline—achieving over 100 miles per gallon.

The results of his road tests were so spectacular that the car was inspected for hidden fuel tanks. None were found and those who drove with Ogle confirmed that they had never stopped to refuel.

Subsequently, the amazing technology was publicized in the El Paso Times, Argosy Magazine, The Philadelphia Enquirer, and many other publications—bringing Ogle’s invention nationwide attention. The modified car was extensively tested and engineers found no evidence of fraud, although naysayers point out that there was no scientifically valid testing of the device to independently corroborate the invention’s purported capabilities.

Abstract: A fuel economy system for an internal combustion engine which, when installed in a motor vehicle, obviates the need for a conventional carburetor, fuel pump and gasoline tank. The system operates by using the engine vacuum to draw fuel vapors from a vapor tank through a vapor conduit to a vapor equalizer which is positioned directly over the intake manifold of the engine. The vapor tank is constructed of heavy duty steel or the like to withstand the large vacuum pressure and includes an air inlet valve coupled for control to the accelerator pedal. The vapor equalizer ensures distribution of the correct mixture of air and vapor to the cylinders of the engine for combustion, and also includes its own air inlet valve coupled for control to the accelerator pedal. The system utilizes vapor-retarding filters in the vapor conduit, vapor tank and vapor equalizer to deliver the correct vapor/air mixture for proper operation. The vapor tank and fuel contained therein are heated by running the engine coolant through a conduit within the tank. Due to the extremely lean fuel mixtures used by the present invention, gas mileage in excess of one hundred miles per gallon may be achieved.

One expert proponent of Ogle’s invention was Professor Gerald Hawkins of Texas A&M University, a mechanical engineer with a background in gas dynamics and aerospace study.

“This is no hoax,” said Dr. Hawkins, “Ogle eliminated the carburetor and achieved what the gasoline internal combustion engine was supposed to do all along – to operate off fumes.”

Ogle’s invention, dubbed the “Oglemobile,” was set to revolutionize the auto industry.

The inventor was courted by international financiers, oil companies, and vehicle manufacturers – with almost everyone foreseeing a future filled with fame and riches.

Ogle was contacted by C.F. Ramsey an “international financier” who wanted to buy the device’s patent and the marketing rights, according to journalist Ron Laytner.

Ramsey eventually signed a contract with Ogle that allowed the inventor to work on his device with financial backing from Ramsey – who, per the agreement, would take over the patent, distribution and development rights of the Oglemobile.

“We signed a preliminary agreement with Tom Ogle the very next day after we saw the invention. All kinds of people were in town, J.C. Penny, Transamerica, General Motors, Ford and others. Specifically Shell Oil offered Tom $25 million. Everybody was after him.”

In June 1978, a few months after Laytner’s first interview with Ogle, his new financial backer, C.F. Ramsey, sold out to Advance Fuel Systems Inc. in what was later determined to be a pre-planned handoff, unbeknownst to Ogle.

Tom was a bit nervous in my later phone calls, but all seemed to be well. He would continue receiving $5,000 a month and funds for research and development. He’d also get 6 percent royalties when the device came to market. Advance Fuel’s own engineers would develop the ‘Oglemobile’ for marketing and in April 1979, a still very ambitious Tom Ogle opened the first of a planned 1,000 nation-wide diagnostic car centers.

But Ogle’s first and only car center soon closed and his monthly checks stopped. Ogle was told he’d get no royalties because AFS was working on a device that got similar results but wasn’t his invention.

On April 14, 1981, Ogle was shot by an unknown assailant in what many deem an assassination attempt—the shooter was never apprehended.

Subsequently, on August 18, Ogle went to a friend’s home, after drinking at The Smugglers Inn, and collapsed. He was taken to El Paso’s Eastwood Hospital, where he was pronounced dead. His death was eventually ruled accidental or suicide, which allegedly involved a combination of prescription pain pills and alcohol.

Many suspect that Ogle’s death was simply a cover-up of his murderer—as he had previously told his lawyer, Bobby Perel, that he thought his drinks were being drugged, especially in The Smugglers Inn where he was playing billiards.

There is no question that Ogle was harassed by power-hungry oil companies, with billions of dollars on the line, that worked diligently to terminate his research and stifle the progress of his highly-efficient technology.

Ogle’s death in 1981 was very likely related to certain powerful energy interests’ awareness of the power of his invention—subsequently, the technology has never seen the light of day.