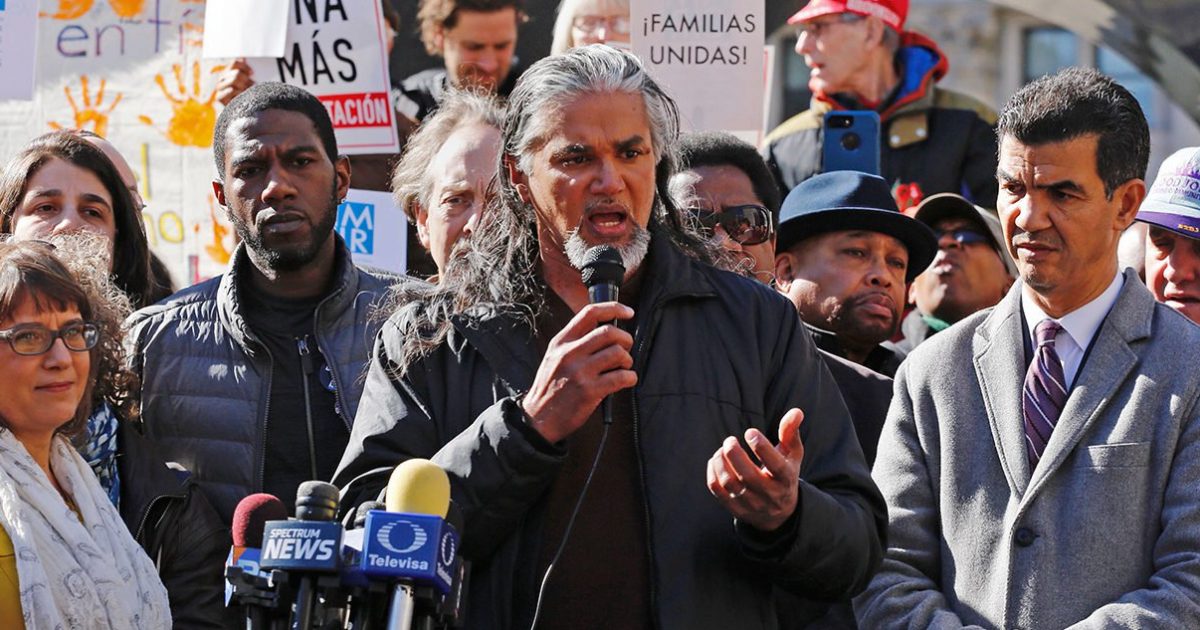 How many times have you been watching the news and see a report regarding some protest of illegal alien invaders?  It’s been pretty consistent now with the Trump administration and the DACA amnesty voided.  Like many others, do you wonder why Immigration and Customs Enforcement (ICE) doesn’t round them up for violating the law and deportation?  Well, it appears that may be about to change.  The Daily Caller reported that ICE detained two prominent illegal alien invader activists for deportation.

Immigration authorities have detained in recent weeks two prominent activists who are themselves illegal immigrants, demonstrating the Trump administration’s commitment to expand the pool of deportable aliens.

The arrested men have openly lived in the U.S. for years and have until recently enjoyed a de facto immunity from deportation, thanks to their status as high-profile immigrants’ rights activists. Immigration and Customs Enforcement (ICE) officials have denied the arrests are politically motivated, but they clearly show that immigration agents are now emboldened to arrest even the most connected of illegal immigrants.

Both men are leaders of the New Sanctuary Coalition of New York City, a network of religious and social organizations that works to prevent the detention and deportation of illegal immigrants. ICE officers first detained Jean Montrevil, a Haitian national who had lived in the U.S. since 1986 despite having served a prison term for drug possession that resulted in a deportation order.

This republic is a republic respectful of the rule of law and maintained upon the rule of law;  it is past time to enforce all our laws duly passed under the authority given by the Constitution to the federal government.

Of course, Montrevil’s arrest and detainment set off a firestorm of protests.  Montrevil, co-founder of the New Sanctuary Coalition of New York City, returned to Haiti courtesy of ICE on Tuesday, despite those public protests.  Protestors “accused ICE of breaking an ‘understanding’ that Montrevil would not be arrested while he appealed his order of removal.”

This man should not have an appeal after committing an additional crime resulting in jail time.  No understanding should have been given Montevil on arrest and detainment – deportation should have occurred on the day he set foot outside the prison wire.

The week prior to Montrevil’s arrest, ICE arrested and detained another employee of New Sanctuary, Executive Director Ravidath Ragbir.

The week before Montrevil’s removal, ICE arrested Ravidath Ragbir during his check-in with officials at the ICE office in New York. The executive director of New Sanctuary and the public face of immigration activism in New York City, Ragbir came to the U.S. in 1991 as a legal permanent resident, but he was ordered deported in 2006 following a wire fraud conviction for which he served a two-and-a-half year prison sentence.

In 2011, the New York field office of ICE granted Ragbir a stay of removal. Then, last April, the Trump administration granted an extension of that stay, but only until Jan. 19, according to the New York Times.

Ragbir’s fellow immigration activists have painted his arrest as an “arbitrary and cruel” detention. Alina Das, Ragbir’s attorney, says he would not have been targeted under the Obama administration, which prioritized deportation of illegal immigrants who were public safety threats or who had committed “serious” crimes.

The severity of Ragbir’s offense is debatable, but his conviction for wire fraud in a $400,000 mortgage embezzlement scheme was upheld in in 2002 by 3rd Circuit Court of Appeals Judge Maryanne Trump Barry, President Donald Trump’s sister. Since that ruling, Ragbir has used his prominence in the activist community to successfully obtain several stays of removal. But the Trump administration’s more expansive immigration enforcement priorities appear to have closed the door for good.

Contrary to what his fellow activists charge, Ragbir’s arrest was anything but “arbitrary and cruel”;  it was in accordance with the law.  His attorney, Alina Das, should know that executive orders are not law and can change with a new president.  Hussein Soetoro is gone as is his days of arbitrary, unlawful, unconstitutional, unilateral law by fiat order.  Moreover, how one individual defines a “serious” crime varies with another, which is why there should be no delineation.  If an illegal alien invader commits another crime, in addition to violating US immigration law, the individual, after his time served, should be deported immediately on the day of release – no appeal of the removal.  Ragbir received “special treatment” because of his “stature” as a prominent illegal alien invader activist, which should not occur in a republic based on the rule of law and respectful of the rule of law.

“Like Jean [Montrevil] and thousands of other immigrants caught in ICE raids, Ravi threatens no one,” she wrote in a New York Times op-ed published Thursday. “On the contrary, he and other immigrant leaders have lead their communities with dignity and courage during a brutal time. That’s why they were snatched — and why ICE wants to deport them.”

Ms. Gottlieb refused to admit that her husband is a criminal, whom she harbored and married.  Granted, he served his time for wire fraud, but, he remained an illegal alien invader.  There is nothing preventing Ms. Gottlieb from accompanying her husband to Trinidad where she is sure to be able to practice her profession there.  To even suggest these individuals, of which her husband is one, was targeted for their political activism is absurd.

She claimed her husband and other illegal alien leaders served their community “with dignity and courage during a brutal time.”  Let that sink in for a minute.  What Ragbir and others hav experienced is brutal, according to Gottlieb.  These individuals have no idea what is brutal.  What Our Lord and Savior Jesus Christ suffered at the hands of those who rejected Him was brutal during a brutal time.  The imprisonment, the conditions of the prison, and the treatment suffered by the Apostle Paul was brutal, also during a brutal time.  Suffice it to say, these individuals have little understanding of brutality.  Ragibr and those like him have a “cake walk.”

One could also argue that a history of committing wire fraud, involving mortgage embezzlement, in the case of Ragbir, and possessing drugs in the case of Montrevil, is not leading a community with “dignity and courage.”  Courage is not sitting in defiance of “just laws.”  Courage is sitting in defiance of “unjust laws.”  To serve a community with dignity means to reflect qualities all should have – one being respect for the law.  Both men have served their time for their additional crimes.  The time has come for them to pay the consequences for violation of our immigration law.  Not to submit to justice for one’s commission of a crime is anything but dignity.

While being set on deporting Ragbir, ICE has held him in detention in New York City pending his appeal on the order of removal.  However, ICE claimed Ragbir had exhausted “his petitions and appeals through the immigration courts, the Board of Immigration appeals, and the US District Court.”  Why is he still being held to fight an order of removal?  How many additional chances would any US citizen be allowed once it was determined all appeal avenues were exhausted?  The answer is none.  It should be no different for these two illegal alien invaders.

While some members of Congress try to persuade the public that illegal alien invaders come to this republic to have a better life and are of the highest character, the actions of Ragbir and Montrevil have shown that many have a propensity to commit additional crimes because of their lack of respect for the law and the citizens of this republic.  If illegal alien invaders had respect for the law, they would enter this republic through proper immigration channels.  By choosing to circumvent the law, they enter this republic through disrespect of the law, which then promulgates the rest of their actions.

Once the government of a people begin to minimize specific violations of the law, it inevitably leads to inequity of the law, implementation of the laws of man, and tyranny and despotism.  Regardless of what one individual assesses as a “serious” crime, another may not.  Therefore, the law has to be applied across the board in an equal manner, without justification of leniency through minimization.  Any violation of the law creates victims, whether directly or indirectly.  And, in a republic of laws, justice has to be served upon those who violate the law.  No exceptions.