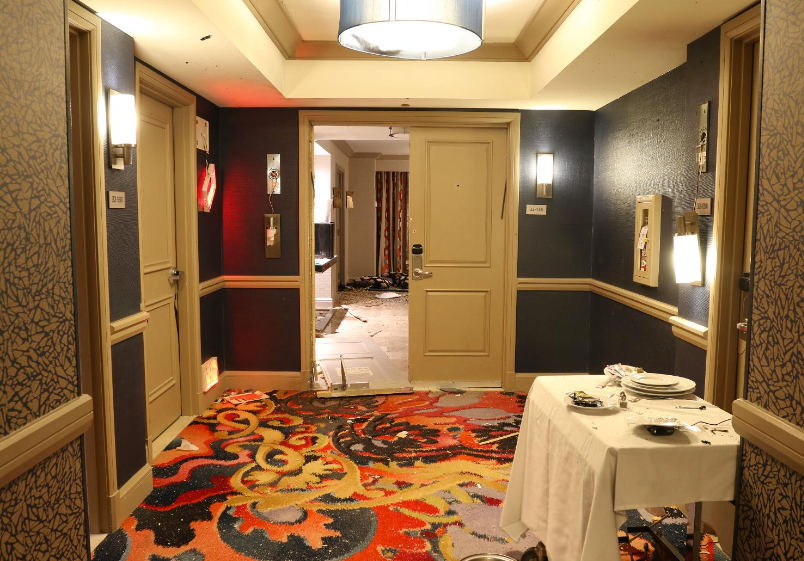 The verdict is in. Photographic evidence shows that crime scene photos in Mandalay Bay were staged to uphold the official narrative of a ‘lone wolf shooter’

Update: Intellihub reached out to Mandalay Bay building engineer Paulina on Sunday, who confirmed over the phone that all stairwell doors and jams in the building are, in fact, metallic and are indeed 3-hour fire rated, per code (i.e. the photograph of the wooden door in “Picture 1” which was released in the LVMPD report is staged. The door which leads into the stairwell has been confirmed to be metal by MGM staff and not wooden, more over the hardware and paint are different colors.) Even if the door shown in “Picture 1” was an inner stairwell door, like the report claims, that door would have to be made metal and not wood — and it is — this has been confirmed. The inner door is metal.

LAS VEGAS (INTELLIHUB) — The Las Vegas Metropolitan Police Department and F.B.I. have some explaining to do after Intellihub discovered that the L-bracket shown in crime scene “Picture 1” on page 54 of the Jan. 19, 2018, preliminary investigative report for the 1 Oct. mass casualty shooting was not screwed to the inner stairwell door outside of room 32-135, as reported by investigators but rather it was screwed to an unknown random door which suggests that the photograph was staged.

This fact can easily be proven.

First we will examine “Picture 1” from the LVMPD’s report, Appendix A, page 54.

It is clear that the door is wooden and is painted white. The door has a gold handle. You can clearly see an L-bracket was screwed to the door about 12-14 inches above the gold handle.

Now, we will examine a picture of the outside stairwell door (pictured to the left).

Just through the door on the left (pictured above) there is another door inside the stairwell foyer which leads to the stairs.

Here is a diagram to make it clear.

The inner stairwell door does have gold hardware but is made of metal and not wood like “Picture 1” implies.

Okay, so I know what you are thinking — maybe the L-bracket was screwed to the other side of the door, inside of the stairwell, right?

Wrong. Video footage captured by Crowdsource the Truth’s Jason Goodman reveals that the stairwell door leading to the 32nd-floor hallway, just outside of room 32-135 can not be the door in “Picture 1.”

Take a close look at the screenshot. You can see that this is a metal door (“Picture 1” is a wooden one.)

The door pictured above is simply not the door which authorities are claiming was screwed shut with an L-Bracket. The door above, the actual door, is a metal door.

According to TruDoor, a fire rated door manufacturer:

Fire-Rated steel doors play a vital role in keeping people safe and minimizing property damage during a fire. Labeled fire doors control the spread of fire and smoke for up to 3 hours. Metal fire doors are an economical alternative to wood fire doors, when more than a 20 minute rating is required. Steel is the sole door material to deliver a 3 hour fire-rating.

The LVMPD and F.B.I. have now clearly been caught staging the crime scene photos.