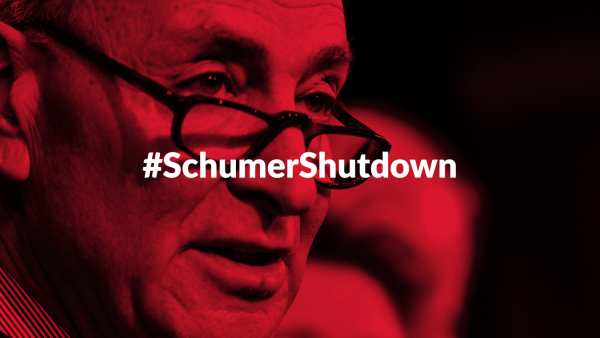 For years the Democrats have been using the leverage of a potential government shutdown to get virtually whatever they want from the Republicans in Congress.  For those of us that are true conservatives, it has been absolutely infuriating to watch this same drama play out over and over again, but this time around the Democrats may have overplayed their hand.  In addition to demanding their way on pretty much every single budget issue, the Democrats also want Republicans to compromise on DACA.  Fortunately, the Trump administration and the Republicans in Congress are standing firm against the ridiculous demands of the Democrats, and this government shutdown will continue until somebody finally blinks.

Many are calling this the “#SchumerShutdown” because it was the Democrats in the Senate that would not agree to the extremely generous agreement that the Republicans were offering.  The mainstream media is freaking out and trying to pin the blame on Trump, but that isn’t going to work this time.

So how long will this shutdown ultimately last?  Well, the truth is that there is a possibility that it could be brought to an end very quickly.  In fact, the Washington Post is reporting that a “bipartisan group of moderate senators” is trying to get something done tonight…

With the start of the workweek for many federal employees less than 24 hours away, a bipartisan group of moderate senators huddled in hopes of reaching an accord on immigration and federal spending they hoped would pave the way to reopening the government by Monday morning.

“I think that there will be a breakthrough tonight,” said Sen. Lindsey O. Graham (R-S.C.), one of the negotiators. Others involved in the meeting said they were “close”to an arrangement.

But of course any deal will not be a long-term solution.

According to Bloomberg, the current deal being discussed would only fund the government through February 8th…

A group of Senate moderates working on a compromise plan to break the stalemate over funding and immigration that forced a partial shutdown of the government were set to deliver a set of options Sunday to party leaders.

About 20 centrist senator from both parties worked out a set of options to extend stopgap funding for the government through Feb. 8. Part of the plan would include a commitment for a separate vote on legislation to put into law a program that protects from deportation some of the undocumented immigrants brought to the U.S. as children. That is a central demand of Democrats.

To me, it is absolutely ridiculous that we ever got to this point.

On day one of the Trump administration, the Senate should have used the so-called “nuclear option” to change the rules so that Senate Democrats can no longer hold funding bills hostage.  Republicans have control of the White House, the Senate and the House of Representatives, and we should be able to get bills passed with a simple majority vote in the Senate.  This is a point that President Trump made on Twitter earlier today…

Great to see how hard Republicans are fighting for our Military and Safety at the Border. The Dems just want illegal immigrants to pour into our nation unchecked. If stalemate continues, Republicans should go to 51% (Nuclear Option) and vote on real, long term budget, no C.R.’s!

Unfortunately, Mitch McConnell is a big-time RINO and a spineless jellyfish.  After Trump’s tweet, he once again reaffirmed that his position is that he is completely against using the “nuclear option”.  The following comes from CNBC…

“The Republican Conference opposes changing the rules on legislation,” a representative for McConnell said in a statement Sunday morning.

This is yet another example that shows that we need new Republican leadership in Congress.  I am the only candidate in Idaho’s first congressional district that is publicly calling for Mitch McConnell and Paul Ryan to resign from their leadership positions, and if you believe in what we are trying to do, I hope that you will support us as we work tirelessly to win this incredibly tight race.

During this government shutdown, our troops will not be paid, but Democrats in Congress are going about their business as if nothing has changed.  For example, it is being reported that Nancy Pelosi invited every Democratic member of the House out to a very expensive Italian restaurant on the first night of the shutdown…

According to media reports, House Minority Leader Nancy Pelosi (D-CA) invited the 192 Democrat Members of the House of Representatives out to dinner at a fancy Italian restaurant in Washington, D.C. Saturday during the first day of the government shutdown.

Members also complaining to me that the House gym lacks enough towels this morning and they wonder if it’s because of the shutdown.

It is time for the Republicans to put the Democrats in their place.  The American people gave Republicans control in Washington because they want our government to move in a more conservative direction.  There simply is no excuse for giving in to the Democrats every time a government shutdown is looming.

The Democrats have become like spoiled children that are accustomed to always getting everything that they want, and my hope is that this time the Republicans will finally say that enough is enough.