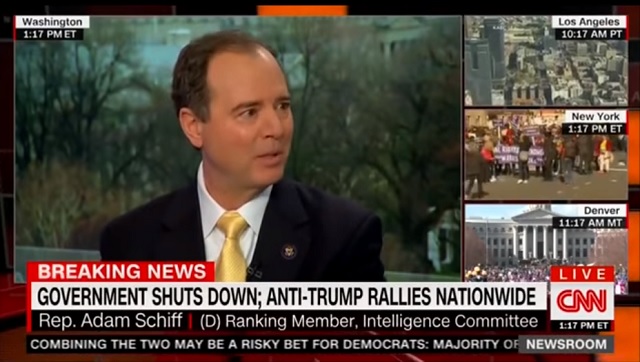 Democratic Rep Adam Schiff told CNN on Saturday the much-hyped FISA memo which Republicans say shows “KGB” level corruption on the part of the Department of Justice should stay secret because American’s don’t have enough context to understand it.

He also said the Twitter campaign #ReleaseTheMemo was not driven by actual concerns on the part of the public but instead Russian bots.

CABRERA: Let me ask you about the Russia investigation. I can’t have you here and not. Especially given how much we talked about it in the first year of the presidency. And now if you turn on any conservative media, they keep talking about this Nunez memo, the chairman of the House Intelligence Committee, that he’s put out there and many Republicans have taken a look at it and they want it made public. Can you tell us what exactly is it?

SCHIFF: It is essentially a set of talking points that the Republican intel staff drafted, based on the highly classified materials which most of the Republican members were forced to acknowledge. They’ve not even read. So they don’t know how distorted these talking points are. But as part of the narrative they want to push out. Interestingly enough, they’ve made common cause once again with Russian bots because Russian bots are pushing their narrative out there. It’s in a redux of the campaign. We have Assange and WikiLeaks and Russian trolls and bots saying, you know, hash tag whatever the GOP narrative is. That ought to tell you a lot about what’s driving this. And that is —

CABRERA: Why not allow peel to look at it and let Americans make the decision for themselves about whether it’s useful information or not?

SCHIFF: Well, because the American people, unfortunately, don’t have the underlying materials and therefore they can’t see how distorted and misleading this document is. The Republicans are not saying make the underlying materials available to the public. They just want to make this spin available to the public. I think that spin, which is a fulsome attack on the FBI, is just designed to attack the FBI and Bob Mueller to circle the wagons for the White House. And that’s a terrible disservice to the people, hard-working people at the bureau, but more than that, it’s a disservice to the country.