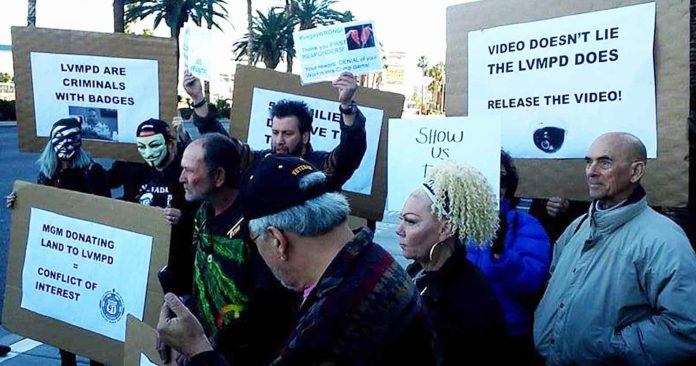 Las Vegas, NV — Dozens of protesters took to the front of Mandalay Bay Casino on Sunday to demand the release of the surveillance footage of Stephen Paddock from inside the hotel.

“Show us the tapes!” demanded the protesters who bravely called for transparency within an investigation that has been filled with retractions, half-truths, and contradictions since the beginning.

Activist Joey Lankowski organized the event which was an effort to let the casino and the Las Vegas Metropolitan Police Department know that the people will not walk away from this with no answers. The families and friends of 58 victims, as well as the hundreds of injured concert goers, deserve to know the truth.

During the protest, activists noted how the failure to release the footage only fuels conspiracy theories and disinformation online.

However, it appears that the police and the casino have no intent on letting the public see the footage of Paddock inside the casino.

Since the horrific massacre took place over three months ago, details and evidence presented by law enforcement have been scant at best. This is not a coincidence. One of the most telling details about the information in this case is the complete and literal blackout of any images or video that show Stephen Paddock (other than him lying dead in the hotel room) in the Mandalay Bay casino—which these activists are trying to expose.

While there has been much speculation as to why no video has been released, a documentary which touches on the massacre provides an answer—the casino is playing a massive game of CYA (cover your ass), and the cops are in their pocket.

The film, titled, “What Happened in Vegas,” explores the role of the Las Vegas Police Department covering up the details of the shooting—for the sole benefit of their bosses in the casino. As to why the police department would deliberately keep secret what is likely the most sought-after information of 2017, the documentary explains that they are in the pocket of the casinos who would be liable for tens of millions in lawsuits because they failed to stop Stephen Paddock from killing 58 people that fateful night.

The reason the police are aiding the casino in a cover-up is simple — the LVPD is run by a sheriff elected in large part by donations from MGM, the corporation that runs the Mandalay Bay hotel. As some of the protest signs pointed out, MGM donated land to the LVMPD. This is definitely a conflict of interest.

As TFTP has reported at length, Las Vegas police have changed their story multiple times on the timeline of the shooting. One important detail the police were caught lying about in several instances is the timing of Paddock’s shooting of security guard Jesus Campos. Why? According to the documentary, it’s likely that the LVPD wanted to help the casino’s legal case, and if they claimed Campos was shot while trying to prevent Paddock’s rampage—as opposed to during or after—it could help the casino’s lawyers later claim that the Mandalay Bay had taken sufficient action to stop him.

There is absolutely no security risk in releasing video of Stephen Paddock inside the casino. Yet the public hasn’t seen so much as a single still image from the footage.

To illustrate just how big of a kick in the teeth this move is to the families of the victims, in the terror attacks which followed the Vegas shooting, videos of those instances were released immediately.

On December 11, a 27-year-old alleged terrorist by the name of Akayed Ullah walked into the underground tunnel between Times Square and the Port Authority Bus Terminal and detonated a crudely-made pipe bomb. Luckily no one but Ullah was seriously injured.

Video of that incident was released within hours of the attack.

Similarly, at the end of October, a suspect identified as Sayfullo Habibullaevic Saipov, rented a pickup truck, drove it onto a busy bicycle path and mowed down innocent people before getting out and brandishing toy guns. Almost immediately after the horrific attack that left 8 dead and a dozen more injured, video of Saipov, an Uzbekistan native, was released.

All this information was immediately released to the public without anyone demanding it. However, if we contrast this with Vegas—as millions demand answers to very simple questions about Stephen Paddock—we are seeing the exact opposite. Why?

Hopefully, the movement to put pressure on police and casino officials continues to grow and the families and friends of victims can finally get their closure.