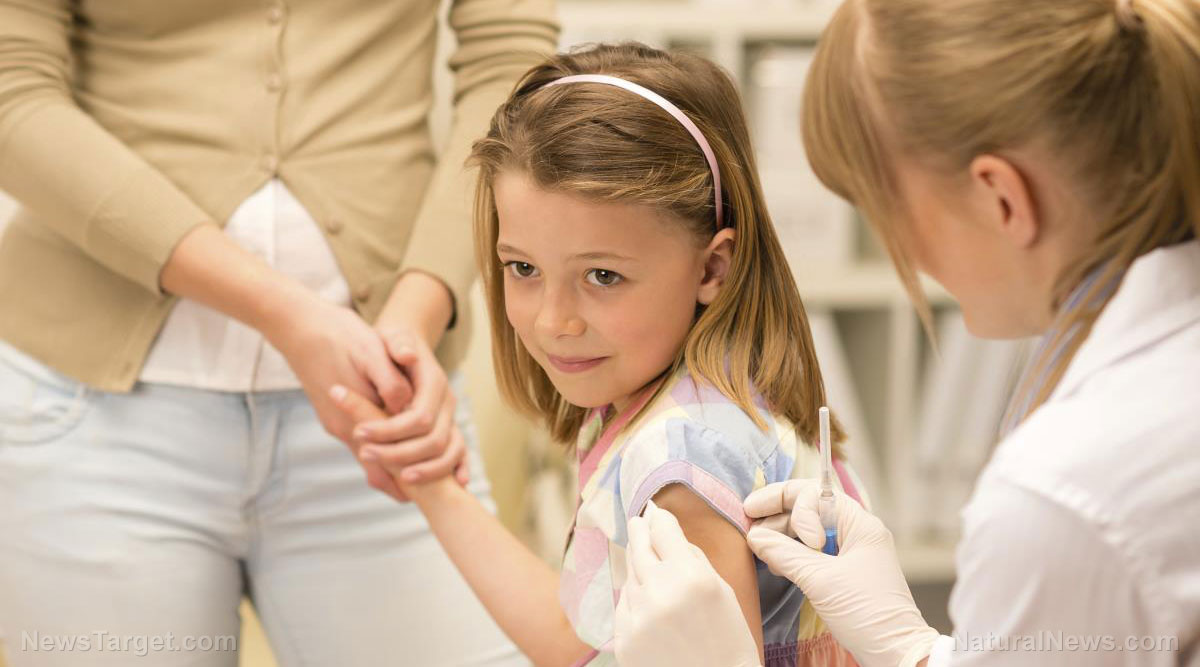 (Natural News) Following in the eugenics footsteps of California’s SB 277, Florida lawmakers are now pushing a totalitarian medical police state law that would deny an education to children who aren’t injected with the extremely toxic and risky HPV vaccine.

SB 1551, being deceptively called the “Women’s Cancer Prevention Act,” mandates HPV vaccines in school-aged children, revoking medical choice rights from parents and invoking state-sponsored coercion to force children to be subjected to extremely risky medical interventions, even against the wishes of their parents.

This is the ultimate medical tyranny on display as the state of Florida prepares to nullify parental rights and essentially “medically kidnap” children as required to make sure their bodies are penetrated with — and invaded by — whatever cocktail of viruses and damaging chemicals are manufactured into HPV vaccines (even the doctors and nurses administering these vaccines have no idea what they really contain).

Paralyzed children, toxic shock effects and an outcry from the medical community

As you consider the disturbing fact that coercive state government is attempting to subject children to a risky medical intervention against their will, consider the fact that a boy was paralyzed from the neck down after receiving a Gardasil HPV vaccination. Don’t forget the “horrendous adverse effects” caused by HPV vaccines in Ireland after an Irish vaccine push damaged countless young girls. Pay no attention to the fact that Japan withdrew its support for HPV vaccines following widespread toxic effects that shocked the nation. And most of all, don’t you dare read anything about one of the developers of HPV vaccines, Dr. Diane Harper, who publicly blew the whistle on the toxicity, harm and health risks posed by HPV vaccines, saying:

If we vaccinate 11 year old’s and the protection doesn’t last … we’ve put them at harm from side effects, small but real, for no benefit. The benefit to public health is nothing, there is no reduction in cervical cancers, they are just postponed, unless the protection lasts for at least 15 years, and over 70% of all sexually active females of all ages are vaccinated.

Also, don’t forget how HPV vaccine marketing propaganda is such an outrageous medical fraud that even doctors and scientists are shocked at the brazen fear-mongering employed by the vaccine industry to push their toxic injections. One GlaxoSmithKline employee blew the whistle on the widespread bribery, fraud and marketing deceptions used to push vaccines and other pharmaceuticals.

Don’t forget: HPV vaccine propaganda is all orchestrated by the pharmaceutical companies

Oh, and don’t forget that all these vaccine mandates are, of course, entirely orchestrated by the pharmaceutical companies themselves. As described in this published scientific article called, “Pharmaceutical Companies’ Role in State Vaccination Policymaking: The Case of Human Papillomavirus Vaccination,” researchers discovered that Big Pharma is behind the state vaccine mandates, just as expected. As the study shockingly explains:

Merck promoted school-entry mandate legislation by serving as an information resource, lobbying legislators, drafting legislation, mobilizing female legislators and physician organizations, conducting consumer marketing campaigns, and filling gaps in access to the vaccine. Legislators relied heavily on Merck for scientific information. Most stakeholders found lobbying by vaccine manufacturers acceptable in principle, but perceived that Merck had acted too aggressively and nontransparently in this case.

Conclusions. Although policymakers acknowledge the utility of manufacturers’ involvement in vaccination policymaking, industry lobbying that is overly aggressive, not fully transparent, or not divorced from financial contributions to lawmakers risks undermining the prospects for legislation to foster uptake of new vaccines.

The corruption and collusion behind the vaccine industry is so pervasive that even a medical journal dared question the insanity of modern-day HPV vaccine propaganda, writing:

What is more disconcerting than the aggressive marketing strategies employed by the vaccine manufacturers is the practice by which the medical profession has presented partial information to the public, namely, in a way that generates fear, thus promoting vaccine uptake………It thus appears that to this date, medical and regulatory entities worldwide continue to provide inaccurate information regarding cervical cancer risk and the usefulness of HPV vaccines, thereby making informed consent regarding vaccination impossible to achieve.

(Read more from that study at this SaneVax link.)

The American College of Pediatricians also has serious reservations about the safety of HPV vaccines. From a Vaccines.news article:

The American College of Pediatricians (the College), recently updated its stance on Gardasil, a vaccine for the Human Papillomavirus (HPV), in wake of recent research about the virus and vaccine. The statement notes that there are legitimate concerns about the HPV vaccine that need to be addressed…

The U.K.’s Joint Committee on Vaccination and Immunisation (JCVI) also declared that HPV vaccines should not be given to boys due to their health risks (and lack of benefits).

Eliminating HPV at what cost?

Zombie doctors who are brainwashed to mindlessly push toxic vaccines invoke a distorted logic to justify their medical tyranny. For example, this WPTV.com article interviews a “Dr. Anna Giuliano” who works for the cancer industry. She dutifully claims vaccines can eliminate all cases of HPV, stating, “In my lifetime, we would see in the state of Florida almost no new cases of cervical cancer.”

But at what cost? How many children have to be paralyzed, hospitalized, injured or even killed by HPV vaccines in order to achieve Dr. Giuliano’s pipe dream of a “cancer free” Florida? These brainwashed doctors always talk about preventing cancer but never acknowledge the risks of government-mandated mass medical interventions. Thus, they discard all rationality and engage in “vaccine cult” groupthink. It’s people like this who should have their medical licenses revoked for functioning as nothing more than mindless pawns of the pseudoscience vaccine industry.

By this same twisted logic, every child in Florida should also be treated with mercury vapors because mercury kills bacteria. Vaccine pushers seem to have all conveniently forgotten the first rule of good medicine: First, do no harm.

The vaccine police state is on the march in Florida

Make no mistake: The vaccine police state is extremely active in Florida, and they will not rest until every single child is forcibly injected with an outrageous cocktail of dangerous vaccines (and while enjoying absolute legal immunity from lawsuits, thanks to existing federal law).

From the article linked above:

If you do not know who your Florida State Senator and Representative are or their contact information, you can login to the NVIC Advocacy Portal, click on the “State Teams” tab and then “My State,” and your elected officials are automatically posted on the right hand side of the page http://NVICAdvocacy.org/

Login to the NVIC Advocacy Portal often to check for updates. http://NVICAdvocacy.org/. Bills can change many times over the legislative process.