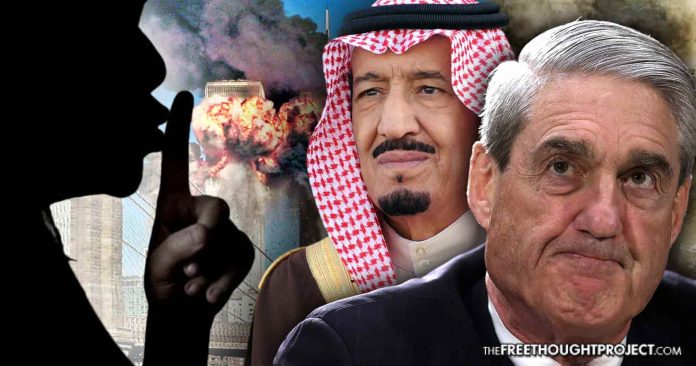 Further deteriorating the propaganda surrounding the government’s probe into alleged interference by Russia in the 2016 election, recently discovered court documents have just revealed that the person leading the investigation, Special Counsel Robert Muller, was complicit in covering up Saudi Arabia’s role in 9/11. Not only did Mueller cover for the Florida Saudi family but, according to the documents, he released intentionally deceptive statements to muddy the official investigation.

The new report, released by Florida Bulldog is nothing short of bombshell.

According to the CIA’s database, 15 of the 19 hijackers were from Saudi Arabia, and when they first arrived in the United States, nine of them arrived in Florida.

As TFTP previously reported, Florida Bulldog, a team of investigative journalists that has spent years probing the connections between the 9/11 hijackers and Saudi Arabia, sued the FBI in 2012 for details on the ties between the hijackers and a rich Saudi family that mysteriously left all of their belongings and abandoned their luxury home in Sarasota, Florida, just two weeks before the attacks. The lawsuit led to the release of materials from a 2002 FBI report, which found “many connections” between the Saudi family and “individuals associated with the terrorist attacks on 9/11/2001.”

The idea that a federal judge would go from supporting a group of investigative journalists and pushing for transparency, to supporting the FBI and insisting that protecting the location of a security camera was worth covering up the funding of the 9/11 attacks, may seem bizarre—but it is a common practice under all administrations.

Under Mueller’s leadership, the FBI tried to discredit the story, publicly countering that agents found no connection between the Sarasota Saudi family and the 2001 terrorist plot. The reality is that the FBI’s own files contained several reports that said the opposite, according to the Ft. Lauderdale-based news group’s ongoing investigation. Files obtained by reporters in the course of their lengthy probe reveal that federal agents found “many connections” between the family and “individuals associated with the terrorist attacks on 9/11/2001.” The FBI was forced to release the once-secret reports because the news group sued in federal court when the information wasn’t provided under the Freedom of Information Act (FOIA).

The disingenuous statements were issued by FBI officials in Miami and Tampa in a desperate effort to disparage a 2011 story exposing the agency’s covert investigation of the Sarasota Saudis as well as reporting that it had been concealed from Congress. Mueller is referenced in a document index that was ordered by a federal judge to be created in late November 2017. The south Florida judge, William J. Zloch, a Ronald Reagan appointee, asked the FBI to explain where it had discovered dozens of pages of documents in the public-records case filed six years ago. The index reference to then-FBI Director Mueller appears in an item involving an agency white paper written a week after the publication of a news story about the abrupt departure of Saudis Abdulaziz and Anoud al-Hijji from their Sarasota area home about two weeks before 9/11. The couple left behind their cars, clothes, furniture, jewelry and other personal items. “It was created to brief the FBI Director concerning the FBI’s investigation of 4224 Escondito Circle,” the al-Hijjis’ address, the index says.

Though the recently filed court documents reveal Mueller received a briefing about the Sarasota Saudi investigation, the FBI continued to publicly deny it existed and it appears that the lies were approved by Mueller. Not surprisingly, he didn’t respond to questions about this new discovery emailed to his office by the news organization that uncovered it. Though the mainstream media has neglected to report this relevant development, it’s difficult to ignore that it chips away at Mueller’s credibility as special counsel to investigate if Russia influenced the 2016 presidential election. Even before the Saudi coverup documents were exposed by nonprofit journalists, Mueller’s credentials were questionable to head any probe. Back in May Judicial Watch reminded of Mueller’s misguided handiwork and collaboration with radical Islamist organizations as FBI director.

What’s more, under Mueller’s leadership, the FBI purged all anti-terrorism material deemed “offensive” to Muslims in an attempt to grovel and give in to multiple radical Islamist groups.

As The Free Thought Project has reported, Trump is also complicit in covering for the Saudis, as he went from calling for holding Saudi Arabia accountable for its involvement in 9/11, to ignoring the idea that the country could have had any involvement at all.

After months on the campaign trail, in which he pledged that if he was elected, Americans would “find out who really knocked down the World Trade Center,” Trump made Saudi Arabia the first foreign nation he visited as president of the U.S.

Trump’s visit with Saudi King Salman occurred on May 20—just four days after Judge Altonaga ruled that the FBI should face a Freedom of Information trial in an attempt to pursue transparency surrounding the funding of the 9/11 attacks.

During the visit, Trump announced plans for a $110 BILLION weapons deal with Saudi Arabia, which adds a new level of context that should be considered when looking at why Altonaga then reversed her decision on June 29.

Now, Americans are told we must believe the outcome of these “investigations” into Russian interference as the man behind them has been exposed as complicit in covering for the people responsible for the deadliest terror attack ever carried out on American soil.