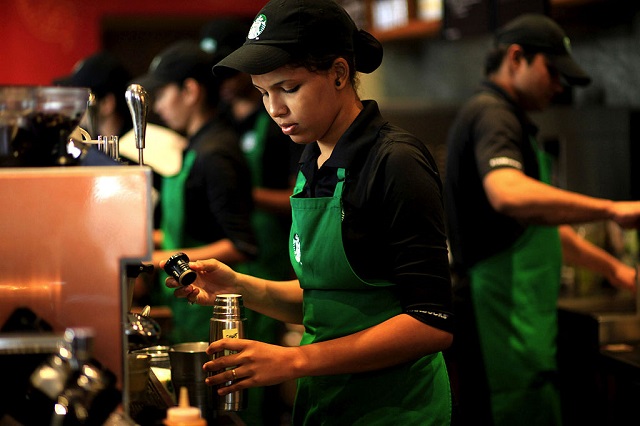 Starbucks announced Wednesday they’re planning to give many of their workers raises, stock grants and sick leave specifically “because of the recent tax overhaul” which lowers corporate tax rates from 35% to 21%, CNN reports.

For the first time in its history, Starbucks is giving all of its baristas sick leave.

A part-time employee working 23 hours a week will get 5 days of sick leave over the course of the year starting July 1, the company said.

Starbucks is also giving baristas $500 in stock grants (store managers get $2000). Employees will now get paid parental leave for up to six weeks, including if they are not the birth parent.

In addition, Starbucks is boosting hourly and salaried employees’ pay starting in April.

Starbucks pays above the $7.25 federal minimum wage across the country, but employees’ wages vary state-by-state. Starbucks did not disclose how much wages would rise.

As a reminder, Democratic Senate Minority Leader Chuck Schumer said just before the Republicans’ tax bill passed that it would not benefit workers, nor lead to any job creation. He cited AT&T as evidence and attacked the company by name.

“I love the example of AT&T,” Schumer said. “Over the last ten years, AT&T has paid an average tax rate of eight percent a year. They have 80,000 fewer employees today than they had then.”

“Tax breaks don’t lead to job creation,” he said. “They lead to big CEO salaries and money for the very, very wealthy.”

Former President Barack Obama also mocked the idea Trump could “bring all these jobs back” to America back on June 1, 2016.