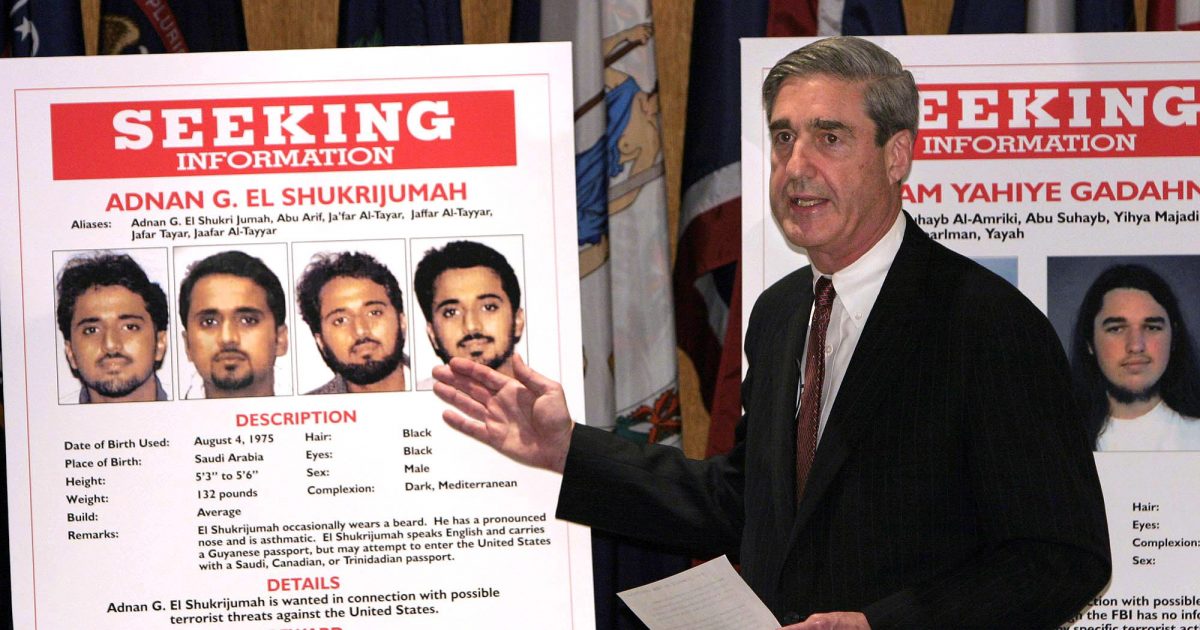 Where are the Democrats on this?  Why are they not demanding Robert Mueller resign and never work in public service again?  Because to do so would be consistent with how they have gone after President Donald Trump and that just doesn’t work for them.

With no evidence in hand after millions of dollars spent and nearly a year of tying up the political climate with what amounts to be a snipe hunt, court records have been uncovered that show that when he was Director of the Federal Bureau of Investigation he worked to cover up the connection between a Florida Saudi family and the 9/11 terrorist attacks.

A recent government court filing is raising questions about then-FBI Director Robert Mueller’s involvement in the public release of deceptive official statements about a secret FBI investigation of Sarasota Saudis with apparent ties to the 9/11 hijackers.

The misleading statements, issued by FBI officials in Miami and Tampa, were made within days of a September 2011 Florida Bulldog story disclosing the existence of the investigation and reporting that Congress had been kept in the dark about it.

The statements sought to discredit the story, asserting that agents had found no connection between the Sarasota Saudi family and the 9/11 plot. In fact, the FBI’s own files contained at least three reports that said the opposite: that agents found “many connections” between the family and “individuals associated with the terrorist attacks on 9/11/2001.” The FBI released those reports later amid continuing Freedom of Information (FOI) litigation brought by Florida Bulldog.

One of those in the Florida 9/11 investigation was an antagonist to the US from Jerusalem, according to a 2002 FBI report.

In April 2015, Graham referenced Florida Bulldog and said that the thing that would vindicate his notion that the 9/11 hijackers had help from within the US would come in the form of documents that were trying to be obtained through a lawsuit.

Graham said that a smoking gun, in this case, is contained in 80,000 documents being reviewed by a federal judge in south Florida. The documents are being reviewed by the judge thanks to the work of FloridaBulldog.org’s investigative journalist, Dan Christensen, who submitted a FOIA request to obtain those documents. These documents, which are being released little by little, show a connection between a wealthy Florida family, the Saudi royal family and the hijackers.

This information is only adding the pile of evidence that Bob Mueller is not what a lot of people think he is.

Under Mueller’s leadership, the FBI tried to discredit the story, publicly countering that agents found no connection between the Sarasota Saudi family and the 2001 terrorist plot. The reality is that the FBI’s own files contained several reports that said the opposite, according to the Ft. Lauderdale-based news group’s ongoing investigation. Files obtained by reporters in the course of their lengthy probe reveal that federal agents found “many connections” between the family and “individuals associated with the terrorist attacks on 9/11/2001.” The FBI was forced to release the once-secret reports because the news group sued in federal court when the information wasn’t provided under the Freedom of Information Act (FOIA).

The disingenuous statements were issued by FBI officials in Miami and Tampa in a desperate effort to disparage a 2011 story exposing the agency’s covert investigation of the Sarasota Saudis as well as reporting that it had been concealed from Congress. Mueller is referenced in a document index that was ordered by a federal judge to be created in late November 2017. The south Florida judge, William J. Zloch, a Ronald Reagan appointee, asked the FBI to explain where it had discovered dozens of pages of documents in the public-records case filed six years ago. The index reference to then-FBI Director Mueller appears in an item involving an agency white paper written a week after the publication of a news story about the abrupt departure of Saudis Abdulaziz and Anoud al-Hijji from their Sarasota area home about two weeks before 9/11. The couple left behind their cars, clothes, furniture, jewelry and other personal items. “It was created to brief the FBI Director concerning the FBI’s investigation of 4224 Escondito Circle,” the al-Hijjis’ address, the index says.

Though the recently filed court documents reveal Mueller received a briefing about the Sarasota Saudi investigation, the FBI continued to publicly deny it existed and it appears that the lies were approved by Mueller. Not surprisingly, he didn’t respond to questions about this new discovery emailed to his office by the news organization that uncovered it. Though the mainstream media has neglected to report this relevant development, it’s difficult to ignore that it chips away at Mueller’s credibility as special counsel to investigate if Russia influenced the 2016 presidential election. Even before the Saudi coverup documents were exposed by nonprofit journalists, Mueller’s credentials were questionable to head any probe. Back in May Judicial Watch reminded of Mueller’s misguided handiwork and collaboration with radical Islamist organizations as FBI director.

If you recall, it was Mueller that also purged anti-terrorism training material from references to Islamic jihad and references that might be “offensive” to Muslims after a secret meeting with Muslims, at least one that is a designated terror group.

Those documents were also obtained by Judicial Watch through a lawsuit and later published an in-depth report on the scandal in 2013 and a follow-up in 2015.

If that wasn’t enough, years later, those same Islamic supremacists would come back and demand those trained under the previous material go through re-education.