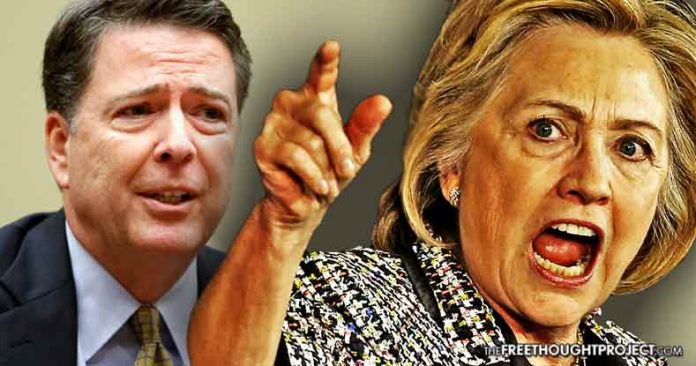 The idea is pitched in a March 2016 exchange between Strzok and Page – relatively early on in their investigation into Hillary Clinton’s mishandling of classified information. Of note, Attorney General Loretta Lynch or one of her deputies would have had to make the ultimate decision to appoint a special prosecutor to look into the “matter.”

“Thought of the perfect person [FBI Director James Comey] can bounce this off of?” Strzok wrote to Page in a March 18, 2016 text. “Pat….You got to give me credit if we go with him….And delay briefing him on until I can get back and do it, Late next week or later.”

“We talked about him last night, not for this, but how great he is,” Page responded.

“I could work with him again….And damn we’d get sh*t DONE,” Strzok wrote.

Strzok noted that Fitzgerald was brought in by Comey as a special counsel in the investigation into who leaked the identity of CIA agent Valerie Plame.

Appointed in 2001 by President George W. Bush, Fitzgerald was the longest-serving U.S. Attorney in Chicago history – and has led several high profile federal investigations and prosecutions.

In a follow-up text exchange on May 13, 2016, Page asks Strzok “Hey forgot to ask if you mentioned the whole special counsel thing to andy?” (referring to current Deputy FBI Director Andrew McCabe).

No special prosecutor was selected for the Clinton email investigation despite calls by Republicans to do so as early as February, 2016.

Instead, former FBI Director James Comey had originally determined Clinton’s conduct fit the legally consequential charge of “gross negligence” which Peter Strzok later downgraded to “extremely careless” – which is not a legal term of art. The agency ultimately recommended that the Department of Justice not press charges.

In a Thursday letter to FBI Director Christopher Wray, Senate Judiciary Committee Chairman Chuck Grassley asked if whether the FBI had approached the DOJ to appoint a special counsel. “If not, why not?” wrote Grassley, who also demanded all written communications on the subject.

The newly released batch of text messages also reveal that the pair of anti-Trump FBI agents were concerned over reprisal from Hillary Clinton, should they aggressively pursue her.

“One more thing: she might be our next president,” Page wrote, adding “The last thing you need us going in there loaded for bear. You think she’s going to remember or care that it was more doj than fbi?”

Th texts also reveal that Page was engaged in a lengthy phone conversation with then-Wall St. Journal (now WaPo) reporter Devlin Barrett – several days after the journalist published a story on FBI Deputy Director Andrew McCabe’s wife receiving over half a million dollars in campaign donations from a committee tied to then-Gov. Terry McAuliffe (D-VA). Barrett also reported on an “internal feud” at the FBI over investigating the Clinton Foundation, leading some to suggest that he was a conduit for the FBI to leak information to the public.

Page was on the phone with Barrett just as news broke that the FBI had found State Department emails on a laptop it seized while investigating former Rep. Anthony Weiner (D-N.Y.) for sexting with minors.

“You may want to tell Devlin he should turn on CNN, there’s news going on,” Strzok replied.

“He knows. He just got handed a note,” Page said.

“Ha. He asking about it now?” Strzok asked.

The text messages don’t indicate what information, if any, Page provided to Barrett or whether her discussions with the reporter were authorized by FBI management. –Politico

The texts released by Sen. Grassley on Thursday were included in a 384-page document delivery to Congressional investigators by the DOJ. While Justice officials said in a cover letter that five months of texts were “missing” and unable to be recovered due to a technical glitch, DOJ Inspector General (DOJ OIG) Michael Horowitz told lawmakers on Thursday that his office has managed to retrieve the missing correspondence between Page and Strzok.

The new batch of text messages along with Grassley’s full letter can be viewed below: