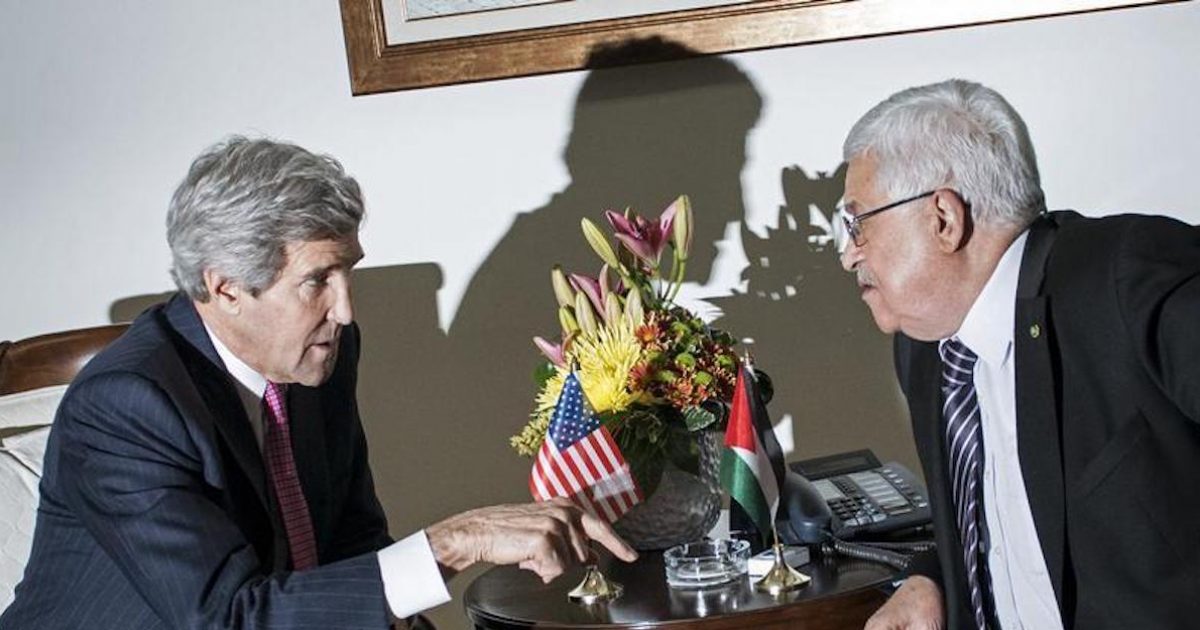 A report is out stating that former Secretary of State to Barack Hussein Obama Soetoro Sobarkah, John Kerry, advised Palestinian Authority President Mahmoud Abbas to “stay strong” and “not capitulate to Trump’s demands.”

The report was first presented by Maariv, an Israeli publication and then picked up by The Jerusalem Post, as well as other news outlets.

Maariv reported that former US secretary of state John Kerry met in London with a close associate of PA President Mahmoud Abbas, Hussein Agha, for a long and open conversation about a variety of topics. Agha apparently reported details of the conversation to senior PA officials in Ramallah. A senior PA official confirmed to Maariv that the meeting took place.

Agha is one of Abbas’s closest associates and one of the veteran peacemakers with Israel.

During the conversation, according to the report, Kerry asked Agha to convey a message to Abbas and ask him to “hold on and be strong.” Tell him, he told Agha, “that he should stay strong in his spirit and play for time, that he will not break and will not yield to President [Donald] Trump’s demands.”

According to Kerry, Trump will not remain in office for a long time. It was reported that Kerry said that within a year there was a good chance that Trump would not be in the White House.

Kerry offered his help to the Palestinians in an effort to advance the peace process and recommended that Abbas present his own.

Agha is a senior associate member of St. Antony’s College, Oxford, and co-author of “A Framework for a Palestinian National Security Doctrine

To me, this smacks of treason, but again this is one report that is being passed around through many other outlets.  So far, there has been no comment from Kerry, Abbas or Agha on the report.

However, former Speaker of the House Newt Gingrich said that he does not believe the Kerry would make such statements.

“That would surprise me,” Gingrich told Fox and Friends.  “Kerry knows, as former secretary of state, former U.S. senator, that that kind of advice would be stunningly unpatriotic.  And I don’t think that John Kerry would do something like that. I hope he wouldn’t.”

Gingrich added that he would be “very, very surprised” if Kerry had “said anything that was that overtly anti-American.”

Commenting on a run by Kerry in 2020, Gingrich said he’d be “perfectly happy” about that.

“The more Democrats who decide that they’ll run for president the better off we’re going to be in 2020. I think Trump will beat any of them so it doesn’t concern me very much.”

I honestly have to ask Gingrich what he has been smoking to say that Kerry wouldn’t say something that “overtly anti-American.”

This is the same man that signed the United Nations small arms treaty, which clearly undermined the Second Amendment of the US Constitution and would have installed a national gun registration.

This is the same man that even the veterans he served with have called him out as “medal-faking charlatan” and some of them were instrumental in torpedoing his 2004 presidential run against George W. Bush.

Yep, Kerry would never say or do anything overtly anti-American, would he, Mr. Gingrich.  Yet, while his fellow Americans were suffering loss of life and limb, here’s what he was engaged in.

In commenting on just how un-American John Kerry is, Richard Anthony wrote:

On April 22, 1971, Kerry became the first Vietnam veteran to testify before Congress about the war, when he appeared before a Senate committee hearing on proposals relating to ending the war. He was still a member of the United States Navy Reserve, holding the rank of Lieutenant Junior Grade. Wearing green fatigues and service ribbons, he spoke for nearly two hours with the Senate Foreign Relations Committee in what has been named the Fulbright Hearings, after the Chairman of the proceedings, Senator J. W. Fulbright. Kerry began with a prepared speech, in which he presented the conclusions of the Winter SoldierInvestigation, and then went on to address larger policy issues.

A “loyal” member of the Armed forces, right? I wonder, just how did Kerry manage to win all his medals he is so proud of in just 4 months? I know ex-soldiers who are ten times the man he is and they never even got so much as a Good Conduct Medal. His fellow Swift Boat service members, from what I’ve heard, had quite a different story to tell and exposed him when he made his bid for the presidency in 2004. Unfortunately for Kerry, certain people, especially veterans, have a long memory when somebody accuses them of the kinds of horrible things that John Kerry did. He thought that nobody would remember just what kind of cheesy rat he was.

You can read about what they have to say about Kerry here.

And do we need to go through the many unconstitutional votes made by the man as a US senator?

The Palestinian Authority is a terrorist state.  There can be no peace with that government despite the attempts of previous administrations, including attempts by the State Department under John Kerry.

If this advice was given, then it amounts to treason as giving comfort and aid to the enemy.  This should actually be an easy thing to investigate and come to a conclusion on, but will anyone do anything?  Probably not.