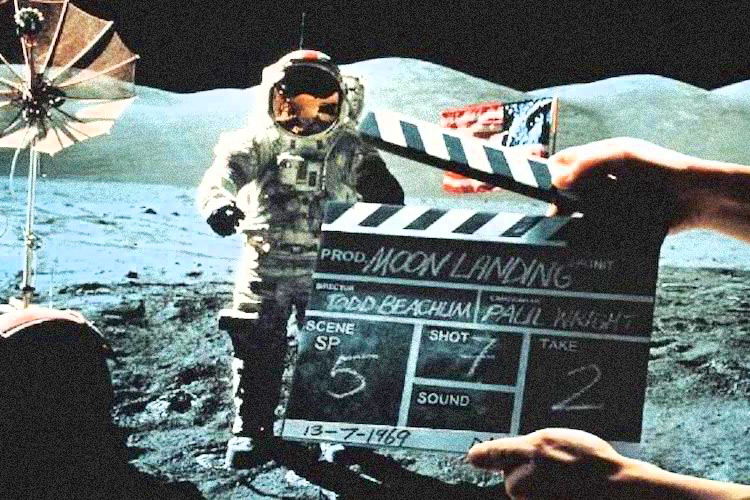 Nearly fifty years after the first moon landing in 1969, many people still wonder if any of the Apollo landings actually happened at all.

The Apollo astronauts who’ve since been asked about their expeditions have maintained the moon landings were legitimate. Astronaut Edgar Mitchell has spoken of his experiences in countless interviews and has always flatly denied the hoax theories. Buzz Aldrin even punched a man in the face for harassing him about whether or not he really walked on the moon.

Many alternative researchers and skeptics of government and cultural narratives have put together a substantial and rather captivating case that the moon landings were faked with the help of emerging television and film technologies.

They posit that the government hired acclaimed film director Stanley Kubrick to stage the landings by creating a convincing movie set in a secret location. Evidence to the support the idea that the video is indeed an elaborate forgery includes anomalies such as the appearance of multiple sources of light in the footage, the flag planted by Armstrong seems to be waving in an environment with no wind, there does not appear to be an impact crater from the lunar landing module, unexplainable objects appear in reflection on helmet visors, the unusual slow-motion effect of the astronauts walking on the lunar surface, the lack of visible stars in the background, and more.” ~Buck Rogers, 2015

Beyond questions about the authenticity of the footage aired on worldwide television, there other parts of the story which to some suggest that the moon landings, as advertised by NASA and the government, were staged events. For example, confusion about how the astronauts were able to safely pass through the Van Allen radiation belts.

These theories won’t go away until some very reasonable questions are answered, something that is less likely to happen with each passing year, especially when you consider that NASA has admitted that the original video footage and telemetry data for the missions is nowhere to be found.

“The original recordings of the first humans landing on the moon 40 years ago were erased and re-used, but newly restored copies of the original broadcast look even better, NASA officials said on Thursday.” [Reuters]

Consider that for a moment. Billions of dollar spent on a space race to the moon and after getting there, not only has no one since returned, but telemetric data for the groundbreaking flight is gone.

I’d go to the moon in a nanosecond. The problem is we don’t have the technology to do that anymore. We used to but we destroyed that technology and its a painful process to rebuild it again.” ~Donald Pettit, Former NASA Astronaut

In the 2005 documentary film, Did We Go?, filmmaker Aron Ranen and crew visited a number of NASA facilities, speaking with high-level NASA scientists, asking them about the missing data. The interviews are revealing, and they make you wonder why such valuable information would be treated so carelessly, or if it the data ever even existed in the first place.

“I haven’t seen anything that indicates the telemetry data is even in existence, and as I said, even if we had it, we don’t have the machines to play it back.” ~Gene Kranz, Apollo 11 Flight Director

The film crew also visited NASA’s Goddard Space Center in its hunt for the missing data, speaking with Dr. David Williams, NASA Archivist at Goddard, who confirmed the data is completely missing.

“We’ve been unable to track it down. I mean we don’t know, uh, where this, this telemetry data ended up, and we don’t know what path it may have taken, so, unfortunately I”m afraid I can’t give you much a clue as to where this data ended up and whether it still exists or not.” ~Dr. David Williams, NASA Archivist at Goddard

View the following clip for these interviews. The entire film, ‘Did We Go?,’ can be seen here.

The moon landing story is suspicious, and when you also factor in the government’s willingness and capacity to shape public opinion on important events with cooperative media and sophisticated propaganda, you wouldn’t be too far out for having questions.

Consider former President Bill Clinton’s statement on this matter, as written in his personal autobiography, My Life:

“Just a month before, Apollo 11 astronauts Buzz Aldrin and Neil Armstrong had left their colleague, Michael Collins, aboard spaceship Columbia and walked on the moon…The old carpenter asked me if I really believed it happened. I said sure, I saw it on television. He disagreed; he said that he didn’t believe it for a minute, that ‘them television fellers’ could make things look real that weren’t. Back then, I thought he was a crank. During my eight years in Washington, I saw some things on TV that made me wonder if he wasn’t ahead of his time.” ~Bill Clinton, My Life

What do you think the true story is? Are you a believer of a non-believer?

This article (Evidence to Prove Moon Landings Were Real Goes Completely Missing from NASA) was originally created and published by Waking Times and is published here under a Creative Commons license with attribution to Buck Rogers and WakingTimes.com. It may be re-posted freely with proper attribution, author bio, and this copyright statement.