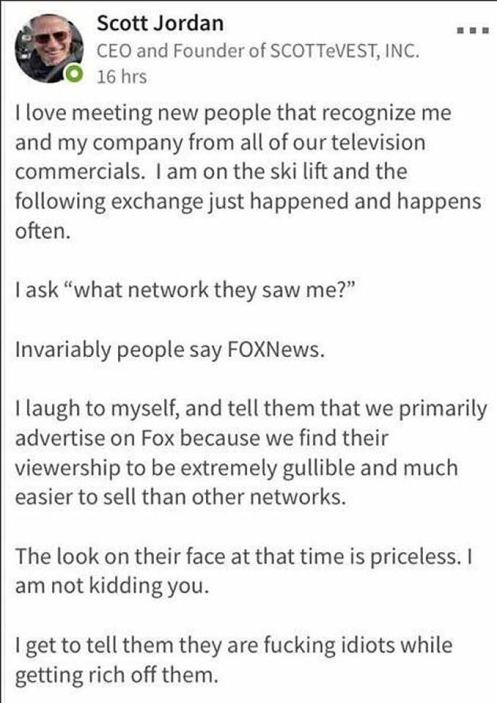 The following post originally appeared at Fellowship of the Minds

From Washington Times: SCOTTeVEST founder Scott Jordan was rebuked by his own clothing company after he posted on Facebook last weekend that Fox News viewers are “f–ing idiots.”

Mr. Jordan co-founded SCOTTeVEST with his wife in 2000, selling a line of multi-pocketed “eVests” designed for consumers to carry multiple gadgets. He failed to clinch a deal on ABC’s Shark Tank with his “Technology Enabled Clothing” (TEC) patent in 2012, The Blaze reported.

Mr. Jordan, who stepped down from the company’s management last year but still holds the title of chief executive officer, was disavowed by the company on Wednesday after he publicly described an encounter with someone who recognized him from his SCOTTeVEST television commercials.

“I love meeting new people that recognize me and my company from all of our television commercials,” he wrote Jan. 14 in the now-deleted post, according to a screenshot captured by a “Shark Tank” fan blog. “I am on the ski lift and the following exchange just happened and happens often: I ask, ‘What network they saw me?’ Invariably people say Fox News.

“I laugh to myself, and tell them that we primarily advertise on Fox because we find their viewership to be extremely gullible and much easier to sell than other networks,” he wrote. “The look on their face at that time is priceless. I am not kidding you. I get to tell them they are [f–ing] idiots while getting rich off them.”

We are extremely sorry for his unacceptable comments,” the company said. “Mr. Jordan’s post was impulsive and inappropriate for too many reasons to list, and rightfully offended so many people. We strongly disagree with the views expressed by Mr. Jordan.”

Company spokesman Luke Lappala told The Blaze in an email that Mr. Jordan had since deactivated his Facebook and Twitter accounts. “We are sickened by his remarks,” Mr. Lappala said.

“To those that I called gullible and idiotic, I am truly sorry,” he wrote. “As the founder of SCOTTeVEST, Inc., I have spent more than 17 years with the help of an amazing team building an awesome company with world class products and customer service. My idiotic statement not only jeopardized all of that hard work, but it also compromised the faith that SCOTTeVEST customers and our team of 20+ employees and contractors entrusted in me.

“I also want to apologize to the SCOTTeVEST customer service team, who are taking the brunt of the backlash for my actions,” he added. “SCOTTeVEST employees are good people that do not deserve to be punished for my actions. I will continue to learn from my mistakes and strive to become a better person.”