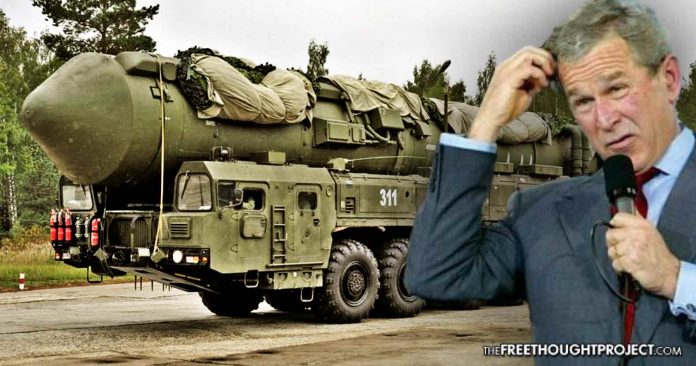 While it may seem absurd to think of a government losing nuclear weapons across the world, the truth is that the United States government has an extensive history of losing its most deadly weapons, and some of them have been missing for nearly 70 years.

Here are seven times the U.S. government lost nuclear weapons that still have not been found:

1. February 1950 – The first known nuclear weapon loss occurred when an American B-36 bomber was flying from Alaska to Texas, and it lost power in three engines. Reports claimed that when the aircraft started losing altitude, the crew began trying to lighten its load by releasing a 30-kiloton Mark 4 (Fat Man) nuclear bomb, into the Pacific Ocean

While the bomb’s uranium components were lost and have yet to be recovered, one diver said he believes he found the remnants of the nuclear bomb off the coast of British Columbia in November 2016.

2. March 1956 – A B-47 Stratojet was of the U.S. Air Force was flying from the MacDill Air Force Base in Florida to an overseas base, carrying two nuclear weapon cores. While the aircraft completed its first air-to-air refueling, it never reached its second tanker and is presumed to have crashed.

As Aerospace Web reported, experts believe the plane and its contents are somewhere in the Mediterranean Sea, but “no trace of the plane, its crew, or its nuclear payload was ever found despite an extensive search.”

3. July 1957 – The next incident occurred when a U.S. Air Force C-124 aircraft left the Dover Air Force Base in Delaware, to transport three nuclear bombs over the Atlantic Ocean. When the aircraft lost power, the crew jettisoned two of the nuclear bombs.

The bombs have never been found, and it is presumed that they are still located somewhere in the Atlantic Ocean, around 100 miles from Atlantic City. The Asbury Park Press reported that when the first bomb was pushed overboard at an altitude of 2,500 feet, “there was no visible explosion as the bomb hit the water and it quickly vanished from sight. The second bomb was jettisoned in the same manner. Again, there was no observable detonation of the high explosive elements.”

4. February 1958 – When a USAF B-47 bomber collided with a USAF F-86 Sabra midair during a simulated combat mission from the Homestead Airforce base in Florida, the pilot of the F-86 was ejected, and the pilot of the B-47 attempted to land at the Hunter Air Force Base in Georgia.

After multiple failed landing attempts, the B-47 jettisoned the Mark 15 Mod 0 nuclear bomb it was carrying, which landed somewhere in the Atlantic Ocean near Tybee Island, Georgia. According to Aerospace Web, the initial search for the weapons lasted for nine weeks, and then “another unsuccessful search was mounted in 2001, and reports of radiation detected less than a mile from shore led to speculation of the bomb’s discovery in 2004,” but the bombs have yet to be found.

5. January 1961 – The next “broken arrow” incident occurred when a B-52 carrying two 24-megaton nuclear bombs crashed after taking off from an airbase in Goldsboro, North Carolina. A structural fire caused the plane to crash, killing three of its eight crewmembers and releasing the two weapons.

One of those weapons struck the ground and then sank in swampy farmland, and while the Air Force recovered its plutonium, most of the thermonuclear stage —including highly enriched uranium that made up the bomb’s core—was never found. Reports claimed that the U.S. Air Force responded by buying a permanent easement that gave the government permission to dig on the land.

6. December 1965 – An A-4E Skyhawk attack plane carrying a B-43 thermonuclear bomb sank into the Pacific Ocean after it rolled off of the USS Ticonderoga while returning to a naval base in Yokosuka, Japan, after a deployment to Vietnam.

The plane, the pilot, and the weapon were lost in more than 16,000 feet of water, and have never been recovered. It was not until 1989 that U.S. officials finally admitted the accident took place, 70 miles from Okinawa. The Los Angeles Times noted that this incident provided “evidence that U.S. warplanes operating off Vietnam were loaded with nuclear bombs and that U.S. warships carried atomic weapons into Japanese ports in violation of Japanese policy.”

7. May 1968 – The attack submarine USS Scorpion was returning to its base in Norfolk, Virginia after a three-month deployment, when it mysteriously sank in the Atlantic Ocean, about 500 miles southwest of the Azores Islands. The submarine, 99 crewmembers and the one nuclear reactor and two nuclear-tipped torpedoes that were onboard, were all lost, and have yet to be recovered.

While questions remain about what led up to the tragic loss, Aerospace Web reported that one of the most prominent theories is that “a battery within one of the submarine’s torpedoes overheated and ignited. The subsequent fire caused a warhead detonation and blasted open the torpedo loading hatch at the top of the forward compartment,” which led to a flood of water to the hatch that sent the Scorpion over 10,000 feet into the ocean.