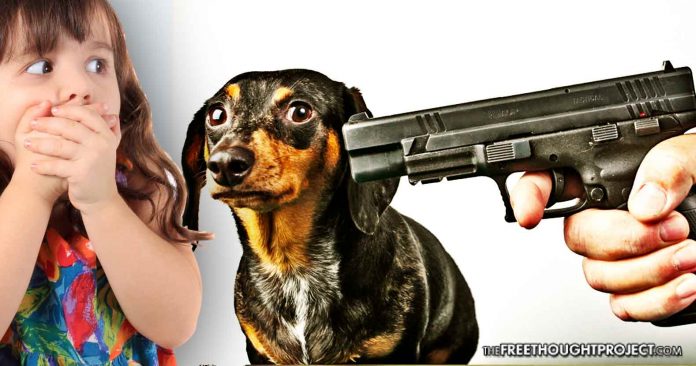 Wichita, KS — In just a matter of a few days, cops in Wichita proved their incompetent and dangerous nature and showed the country that they are in dire need of de-escalation training. In December, an innocent man was murdered by Wichita police for the ‘crime’ of opening his front door in front of frightened trigger happy cops. Now, a cop has actually been fired after he shot a little girl inside her own home just two days after they killed the innocent man.

At the beginning of the month, a Witchita cop was placed on administrative leave after discharging his firearm inside a family’s home—in a cowardly attempt to kill a dog—and hitting a little girl instead. Now, in an actual moment of accountability, Officer Dexter Betts was fired this week in response to his potentially deadly act.

The officer was hired last January and barely made it a year before being fired.

As KAKE reports, officers were called at around 6:15 p.m. to the report of a domestic disturbance and suicidal person in the 1500 block of North Gentry, near 13th and Hillside. Officer Paul Cruz said in a news release that officers were told a 33-year-old man in the home had held a gun in his mouth and choked a dog.

When officers arrived at the home, instead of getting the woman and four children to safety, they went in guns blazing after learning that the gun the man had held in his mouth was under a pillow in a bedroom.

“While the officers were retrieving the gun, a mid-sized mixed breed dog charged at one of the officers,” the release said.” The officer pulled his service weapon and shot at the dog, missing it.”

The poorly aimed shot then ricocheted off the floor and a fragment of the bullet struck the innocent 9-year-old girl in the forehead just above her right eye. Had the bullet struck just an inch lower, the poor girl could’ve been permanently blinded or worse.

Danielle Maples, the girl’s mother recounted the horrifying experience to the press noting that her daughter was sitting down on the couch when she was struck in the head. Also, her 6-year-old son was standing right next to the officer when he fired not one but two shots.

The little girl was brought to the hospital and treated for her injuries. Luckily, Maples’ three other children were not physically injured. However, the emotional scarring left by this experience could last a lifetime.

Maples explained how at the hospital doctors removed three fragments of the bullet from her daughter’s head showing just how close she’d come to being blinded.

Wichita Police Chief Gordon Ramsay reportedly told Maples that he watched the body camera from the officers in the room when Betts opened fire.

As Kansas.com reports, she said Ramsay told her in a phone conversation “that what he witnessed was not only morally wrong but against their protocols and training.” He didn’t say why, she said.

As for the suicidal man in the home, luckily he was not killed and completely cooperated with police. He was also brought to a hospital where he was given a mental health exam, according to the police statement.

According to the Wichita Eagle, the case will be reviewed by the District Attorney’s Office in addition to an internal review to determine if department policies were followed.

Sadly, police officers attempting to kill dogs and hitting innocent people in the process is an all too common occurrence.

As TFTP previously reported, responding to the house of a woman requesting medical treatment, a Columbus police officer arrived at the front door and immediately shot her 4-year-old daughter when attempting to kill their dog. Fearing that a jury would award the family substantially more money, the Columbus City Council unanimously approved a $780,000 settlement with the innocent girl’s family.

Prior to shooting the little girl, a police officer in Iowa shot and killed an innocent woman while attempting to kill her dog.

Gabriel Steele was loading up their 4-year-old son when the couple’s dog came playfully running out of the house. Officer Jesse Hill was at the Steele residence acting as an escort in a domestic dispute incident when he saw the dog and feared for his life. He then pulled his sidearm and fired off at least two rounds, one which fatally struck Gabriel’s wife Autumn.

Witnesses say that at this time the dog was being playful, but apparently still threatened the officer which caused him to draw his pistol and begin shooting. Video confirmed this claim, yet the officer involved was never charged with a crime.

It’s not only innocent children and woman who are hurt when cops fear dogs, it’s also their fellow cops. An NYPD officer executing a search in the hunt for a robbery suspect earlier this year accidentally shot a U.S. marshal in the foot when he fired at a dog.

When officers aren’t properly trained to deal with situations such as these, tragedy is often the outcome.

While tasked with the authority to carry a deadly weapon in all situations, this heavy responsibility is often disregarded, with innocent civilians — as well as other officers — becoming victims in the process.