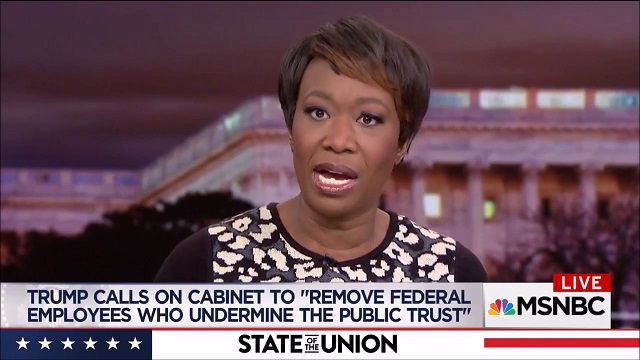 MSNBC’s Joy Reid criticized President Trump for talking about MS-13 during his State of the Union because she thinks it’s a non-issue about “a gang nobody that doesn’t watch Fox News has ever heard of.”

During MSNBC’s coverage of the State of the Union, Reid mocked the president’s remarks while analyzing the speech with “Hardball” host Chris Matthews.

Reid said Trump simply mentioned the deadly gang to accommodate the “audience he wants applause from.”

This is what she meant by the “audience he wants applause from”:

Church … family … police … military … the national anthem … Trump trying to call on all the tropes of 1950s-era nationalism. The goal of this speech appears to be to force the normalization of Trump on the terms of the bygone era his supporters are nostalgic for. #SOTU

One of those people who is clueless about MS-13 is Democrat Rep. Brenda Lawrence who similarly echoed Joy Reid’s comments after Trump’s speech.

Rep Lawrence attacked Trump for being “so focused” on what she called this “M-16” street gang, which she said “spoke nothing about crime in America.”

“To be so focused on this M-16, or, the, this illegal immigrant gang that he speaks of, spoke nothing about crime in America, about his commitment to America First,” Rep Lawrence said. “What about fighting the crime that’s in our streets? It’s not by immigrants!”

I guess she’s not a Fox News watcher.