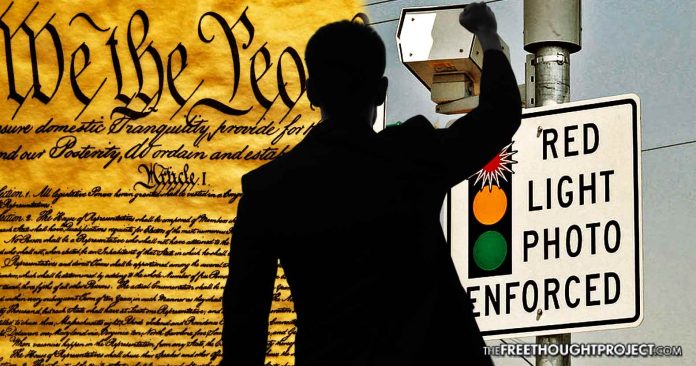 New Miami, OH — In a time where there are daily attacks on the US constitution, a glimmer of hope has arisen in New Miami, Ohio as the state appeals court ruled in the favor of the citizens. All drivers who were sent one of the town’s ‘unconstitutional’ speed camera tickets will be getting a refund thanks to a court system that protected freedom instead of the state.

The court ruled that the $3 million in fines stolen from drivers with no due process was all obtained illegally and they must now pay it back.

The Ohio Court of Appeals on Monday delivered a heavy blow to New Miami’s attempt to block a court-ordered refund of $3,066,523 in speed camera citations. The village insisted that the lower court (view ruling) got it wrong and that the village should not be forced to pay back any amount on the grounds of sovereign immunity. Not so, said the unanimous three-judge panel.

The battle over speed camera tickets started six years ago in New Miami. After the citizens of New Miami woke up to the fact that their due process had been entirely removed by Optotraffic — a private vendor allowed to extort citizens with the blessing of New Miami politicians — the people fought back in the form of a class action lawsuit. Because drivers were simply mailed a ticket and told to pay it or else, this eliminated their due process as guaranteed by the constitution.

As Tech Dirt reports, “the lower court had problems with the lack of options made available to ticket recipients to challenge speeding tickets. It also had problems with New Miami’s cozy relationship with the speed camera company, which provided free cameras in exchange for a percentage of collected fines. This fostered an unhealthy relationship between the two, leading to the town becoming most famous for being a speed trap. The company saddled New Miami with a minimum of 100 operating hours per camera each month. This led to a spike in tickets and a healthy thirst for continual cash infusions on the part of New Miami’s governance.”

The greedy government—unwilling to let go of the $3 million—then took their case to the appeals court, who once again ruled in the favor of the constitution. The city government attempted to claim “sovereign immunity” noting that they should not be held liable for damages arising from a civil suit. However, the court found that refunding stolen money to extorted drivers is hardly the same as paying out monetary damages.

[P]laintiffs are seeking the recovery of the specific amount of penalties they paid pursuant to the unconstitutional ordinance and that were therefore wrongfully collected by New Miami. That is, Plaintiffs are seeking the return of specific monies that had once been in their possession and so belonged to them “in good conscience,” and thus have asserted a claim for the return of the very thing to which the class was allegedly entitled in the first place. Santos, 2004-Ohio-28 at ¶ 13-14. The action seeking restitution by Plaintiffs “is not a civil suit for money damages but rather an action to correct the unjust enrichment of” New Miami. Id. at ¶ 17. As the Ohio Supreme Court plainly held, “A suit that seeks the return of specific funds wrongfully collected or held by the state is brought in equity” and “is consequently not barred by sovereign immunity.”

After they lost their sovereign immunity claim, the city government attempted to claim they had the legal right to extort citizens with traffic cameras. The court agreed that traffic cameras are indeed legal, however, New Miami used them in an illegal and unconstitutional manner.

New Miami claims that this is not a case where Plaintiffs are seeking reimbursement for services rendered or money “wrongfully collected.” New Miami asserts that the penalties paid by Plaintiffs were not “wrongfully collected” because New Miami has the authority “to operate traffic programs and collect penalties for violation of traffic laws.” Apparently, it is New Miami’s contention that because it has legal authority to collect penalties for violation of its traffic laws, Plaintiffs’ claim is necessarily for money damages based upon a denial of due process in the collection of those penalties. While it is true that New Miami has the authority to enforce its traffic laws, it must do so in a constitutional manner. New Miami does not have the authority to do so in an unconstitutional manner.

While this is certainly a victory, if history is any indicator, the city—who has likely already spent the $3 million—will most likely appeal to a higher court. Hopefully, they will rule the same way.

As more people refuse to comply, these companies, who rely on corrupt and greedy politicians willing to sell out their citizens for a buck, will begin to fail. And, when they lose — freedom wins.