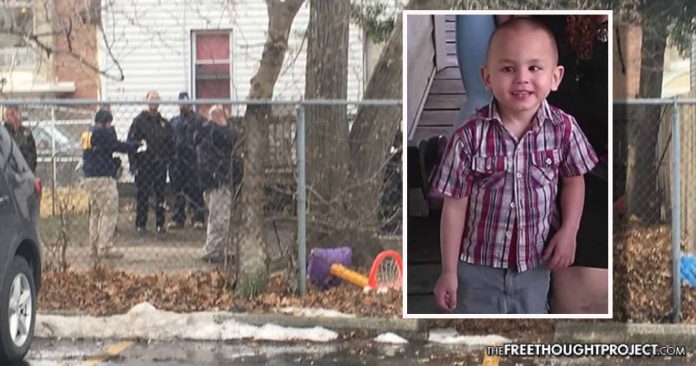 Cleveland, OH – In the same country where children can be taken from their homes if their parents are found possessing “illegal” plants, one woman who was being paid by the state to keep children safe, accepted bribes from a mother, and did nothing to interfere while she tortured her 5-year-old son to death.

Cleveland Police received a call from Pakistan in December, in which a man claimed his brother helped bury a young boy’s dead body in the backyard of a residential neighborhood. When investigators located the yard, they began digging and recovered the body of a boy who they believe died in September, according to report from Cleveland.com.

The boy’s body showed multiple signs of abuse, including broken ribs, and his mother, Larissa Rodriguez, 34, was arrested and charged with murder, felonious assault, gross abuse of a corpse and child endangerment.

While it is not clear what investigators believe happened to cause the boy’s death, his mother’s boyfriend, Christopher Rodriguez, was also charged with murder.

But there is another side to the tragic story that calls the legitimacy of social services into question. Nancy Caraballo, 45, a social worker with Catholic Charities, which is a division of the county’s Education Services department funded by Cuyahoga County and the State of Ohio, was assigned to the Rodriguez family.

Investigators are now revealing that while Caraballo visited the family’s home regularly, she did not report that Jordan Rodriguez, who was developmentally-disabled, had gone missing for months because she was being bribed by Larissa Rodriguez. WKYC News reported that Caraballo “bought more than $10,000 of their food stamps, paying 50 cents on the dollar.”

In addition to purchasing the food stamps that were supposed to buy food for the 5-year-old boy who was buried in the family’s backyard, Cuyahoga County Prosecutor Mike O’Malley said Caraballo was also abusing her power by failing to report that Larissa Rodriguez’ nine children were living in a home infested with roaches, rats, and bedbugs.

“The home was infested with bedbugs and cockroaches and it was a very disgusting, unlivable situation,”O’Malley said. “As a mandatory reporter, she [Caraballo] would’ve been obligated to report these gross abuses that she [Rodriguez] was committing upon these children.”

Investigators claim the abuse has been ongoing since 2015, and they believe Caraballo falsified at least 11 monthly reports regarding the conditions of the home. While they cannot confirm whether Caraballo knew about the death of Jordan Rodriguez, O’Malley said that she could face additional charges if the county’s medical examiner’s office determines that malnourishment played a role in the boy’s death.

“If in fact, we can tie this deprivation of food to this child if we can tie that to his homicide,” O’Malley said.

Cleveland.com reported that the county has opened 13 abuse or neglect investigations into Rodriguez since 1999, and social workers who have visited the home in the past have reported “deplorable and unsanitary conditions,” and even claimed that they witnessed “one child eating a cockroach-filled sandwich when they arrived at the house.”

In this case, it is clear that the same social worker who was paid by the state to report the inhumane conditions several children were being subjected to, had the power to save the life of Jordan Rodriguez. If only she had chosen to act in the interest of the innocent children who were being abused, instead of staying silent because she was getting half-priced food stamps.