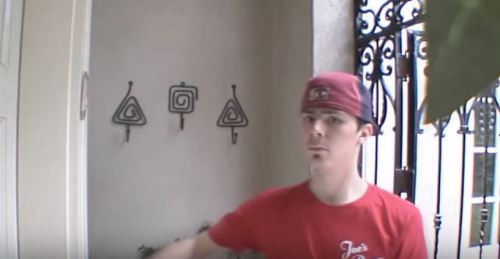 Below are the symbols for “boy lover”, “girl lover” and “child lover” pedophiles, according to the FBI:

The FBI’s Symbols and Logos Used by Pedophiles furthermore states:

Pedophilia symbols on jewelry, coins, Web sites and other effects are indicative of advertisement methods used by child sexual predators to promote their cause. Pedophile activists advocate for the social acceptance of sexual relationships between adults and children. These organizations seek to decriminalize sexual relationships between adults and children and to legalize child pornography based on their belief that children have the ability to consent to sexual acts…. Investigators should also be attentive to pedophilia symbols advertised on Web sites.

On May 14, 2015, the skit was “Cousin Sal’s Home Deliveries — Pizza”. As you watch it, keep in mind the pedophile symbols and the FBI’s warning about those symbols on websites being “indicative of advertisement methods used by child sex predators to promote their cause”.

In the event YouTube takes down the video, I took a screenshot from the video showing three decorative hooks on a wall outside Cousin Sal’s front door, two of which are the pedophile symbols for boy lover.