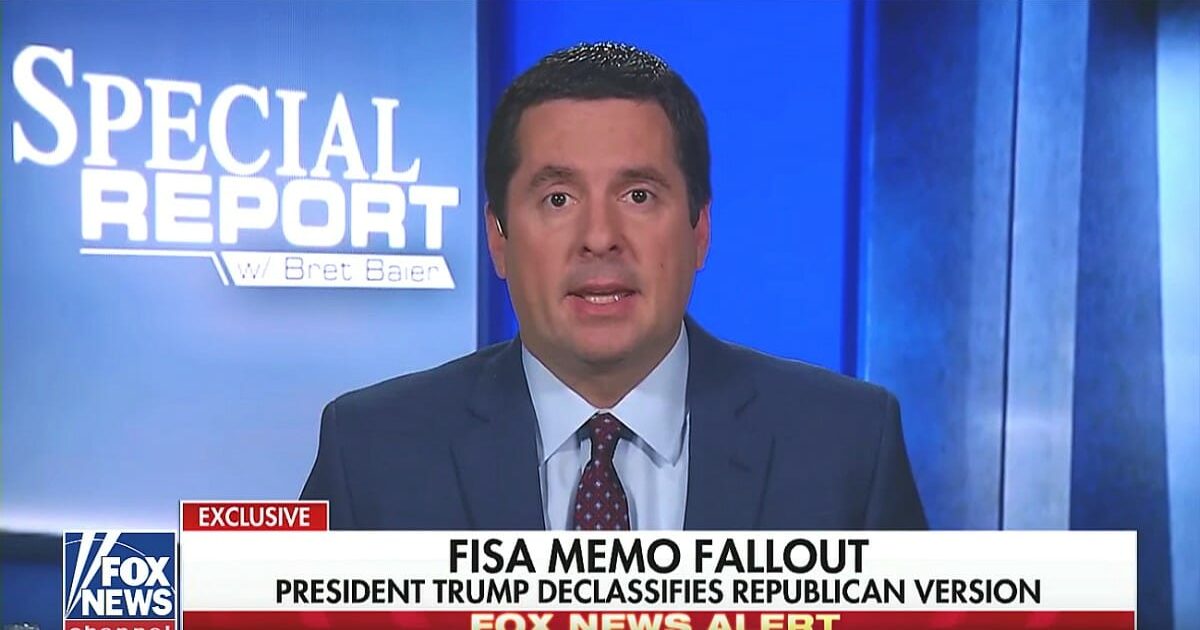 Congressman Devin Nunes (R-CA) is among the most hated, and derided Republicans in liberal circles right now.

He’s been getting hammered by the mainstream media, he’s been attacked by his Democrat colleagues, and he’s been turned into the poster boy for everything wrong in Congress by the left.

But the simple truth is that he was the first person to tell the truth about the Russia-Trump-2016 election narrative.

Almost a year ago, Nunes held a press conference saying that he’d found evidence that the Democrats had worked with the intelligence community to undermine the Trump campaign… and now, we know that’s exactly what happened. For his honesty, Nunes was railroaded off of his committee, forced to face an ethics review (which exonerated him) and mocked in the media.

Today, he’s been proven correct, he’s been cleared of wrongdoing, and yet… the media still mocks him and the left still derides him as a stooge for the Trump administration.

But all Nunes did was tell the truth.

On Friday evening he sat down with Fox News’ Bret Baier to talk about the memo and about the reaction to what his committee has found.

First, Nunes reminded Baier and his viewers that the Steele Dossier was proof that it was the Clinton campaign “colluding” with the Russians, not Trump.

Bret Baier: So, you don’t know anything that’s been corroborated by intel as a part of a dossier?

Devin Nunes: No, very little, and I think if you actually look at that dossier from the beginning, I don’t know what the FBI agent, what they were smoking that would think that Carter Page who somebody who doesn’t — who hasn’t had a job for many years, who is obviously a Russian sympathizer, but that somehow the Russians who actually said he was an idiot in court testimony, this was presented before the court, so Russian agents said Carter Page was an idiot.

And do you think that the Russians were going to offer him like a 19 percent share of the major oil company in Russian? I mean, this is crazy. And so, when somebody first reads that dossier, I would think you would come away from that and think, OK, this is really pretty — this is wild stuff. In fact, it was probably — there was a good chance, let’s not forget where the dossier came from, it came from Russians.

So, there is clear evidence of collusion with the Russians, it just happens to be with the Hillary Clinton campaign and the Democratic National Committee, that the news media fails to talk about or fails to even investigate.

Nunes also explained that the memo wasn’t meant to attack the intelligence community, or to take away from the Russia investigation. It was simply meant to show that the FBI used Clinton funded, DNC ordered, opposition research (from a biased source) as reasoning to get a FISA warrant against Carter Page. It’s illegal and it was a violation of Mr. Page’s 4th Amendment rights.

Bret Baier : The FBI, DOJ, other intel agencies all say there are material omissions in this memo. What did you leave out? Is there — is there justification for the FBI behavior you detailed in this memo that we have yet to learn?

Devin Nunes: Yes. So, we looked specifically at just FISA abuse. We wanted to keep sources and methods out. If you remember, 10 days ago, we were accused of a lot of things, especially that we were going to disclose our nation’s top secrets. I think everybody has learned, that was a total fallacy that was put out by the left and the mainstream media. We didn’t disclose any secrets.

Part of that is we had to take all of this information and reduce it down into a summary with just the pertinent facts about the FISA abuse. The only area that I am familiar with that we left out would be the history of Carter Page. I explained why we left this out to the director of the FBI. The director of the FBI is well aware of my concerns about Mr. Page.

And I don’t believe that somebody like Mr. Page should be a target of the FBI, especially using salacious information paid for by a political campaign like this dossier was about Mr. Page and then supplemented by a news story that was — that was actually created by Christopher Steele himself the author of the dossier. This is — this is outrageous that this happened…

Bret Baier: So, you were getting to the point about how much of the FISA applications relied on the Steele dossier. What was it, the characteristic? You said they were integral? Or it was integral?

Devin Nunes: Yes, they wouldn’t have received a warrant without the dossier. The dossier was presented to the court as it was — as if it was true. The court was not told that the Democrats have actually paid for this.

And just step back for a moment. This is not trying to go after some terrorist. This is about — they opened, the FBI opened a counter-intelligence investigation into the Trump campaign in the summer of 2016. That’s what happened.

And then they got a warrant on someone in the Trump campaign using opposition research paid for by the Democratic Party and the Hillary Clinton campaign. That’s what this is about. And it’s wrong and it should never be done.

BAIER: Is it true that the FBI led the FISA application with the dossier?

NUNES: Yes, most of the — the largest percentage of the entire application has to do with the dossier and then using the news story to corroborate the dossier.

For what it’s worth, Congressman Trey Gowdy (R-SC), who played an integral roll in writing the memo, agreed with Nunes on this last point – that no FISA warrant would have been given without the dossier.

NEW: Would FISA app have been authorized w/out the dossier? @TGowdySC says "No. It would not have been" MORE on @FaceTheNation soon. pic.twitter.com/kEmQFzRojm

Here’s the full interview between Bret Baier and Devin Nunes: