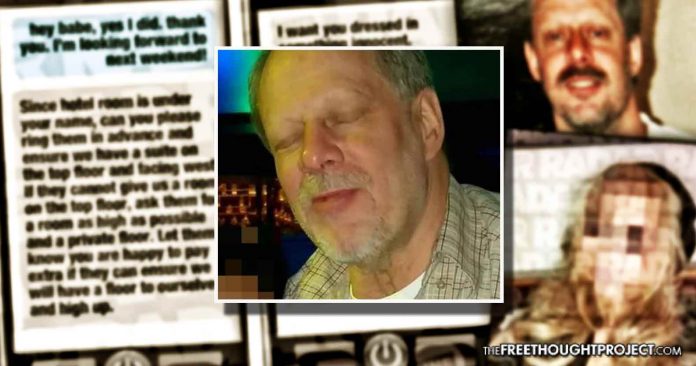 Las Vegas, NV — Shocking information on Stephen Paddock was recently reported which has gone completely unnoticed by the mainstream media. The report entails testimony from one of Paddock’s high-priced escorts who is blowing the whistle on how a prostitute who met with the deranged shooter just before the massacre has since gone missing and noted how Paddock thought he was under the control of the government.

The escort was reported missing by her boyfriend just after the shooting and now, a former escort who once dated Paddock is speaking out about the sheer insanity involved in this case.

“She was telling girls after work that she was scared something would happen to her,” claimed former escort Mikaela, whose full name is being withheld to protect her identity according to Radar Online. “She was booked the day before or the day of the shooting before she disappeared.”

As was widely reported after the shooting, Stephen Paddock allegedly acted out depraved torture fantasies with the escorts, paying them upwards of $6,000 an hour to tie them up and pretend to rape them.

In a text message to the escort, the killer boasted about how he was “born bad” and had the “bad streak is in my blood” thanks to his bank robber dad.

He wrote: “I didn’t have anything really to do with him (my dad) but the bad streak is in my blood. I was born bad.”

As TFTP reported at the time, one quote from a Las Vegas prostitute tied Paddock to a group of people who question the U.S. government.

“The 27-year-old woman said Paddock, 64, would often rant about conspiracy theories including how 9/11 was orchestrated by the US government.”

Now, however, thanks to testimony from Mikaela, who has since moved out of the country according to Radar, things have gotten even stranger.

Mikeala was hustling for an escort agency when she first met Paddock, a habitual high roller, in early 2015. After two dates the smitten 64-year-old volunteered to be her “sugar daddy.”

Soon she was hooking up with Paddock two to three times a month at the Mandalay Bay Resort and Casino, even inside the same hotel room the madman used as his sniper’s nest during the worst mass shooting in American history.

What’s more, Radar has learned just before the rampage Paddock began sending bizarre text messages to another of Mikaela’s call girl pals, showing he was becoming completely unhinged and paranoid.

Unhinged and paranoid was an understatement. According to her testimony, Paddock claimed to be a government experiment.

“There’s messages where Stephen is telling her he’s a government experimentand that they are listening to everything he says and does, and they can hack into his brain and take over,” Mikaela said.

While these alleged texts may or may not have occurred, the fact remains that Paddock did reportedly act out very strange fantasies with prostitutes and was on record in the press as having mentioned government conspiracies.

It is also important to note that documents revealed that the CIA planned for and participated in “influencing human behavior” with electronic signals like Paddock was alluding to.

In one of the more ominous documents released in the JFK files, titled Commission on CIA Activities within the United States the CIA admits to numerous campaigns of propaganda and public deception.

One bullet, in particular, deals with the CIA’s “involvement in research on techniques for influencing human behavior and on methods of protecting Agency personnel against hostile use of drugs or “brain working” techniques.”

For those familiar with the CIA’s MK Ultra program, the above-mentioned techniques are shockingly telling, to say the least.

What’s more is the fact that the CIA has declassified these mind control experiments in which they used prostitutes and psychedelic drugs to attempt to control people’s thoughts.

Amid fears The Russians might perfect mind control before the United States government could manage to do so, the CIA turned unapologetically to experiments with LSD, leaving victims none the wiser — setting up fake brothels in San Francisco and, later, Marin County, where hired prostitutes would bring the agency’s prey: the unremarkable men of the lower and working classes who would be unlikely to retaliate if anything went awry.

“The CIA was scared stiff the KGB was going to get all this LSD and come over and start dosing people,”Richard Stratton, a former hippie pot kingpin ultimately caught and imprisoned, explains of Midnight Climax (the CIA LSD brainwashing program). “So, we bought every drop of LSD in existence at that point.”

Not only is this information not conspiracy theory, but it was aired publicly on the history channel last year. And this is only the information that has been declassified. Imagine what they are not telling us.

As people continue to search for reasons as to why Stephen Paddock would kill so many innocent people that night, we continue to find more questions than answers. Although the idea that Paddock was some brainwashed MK ultra experiment gone awry may seem like some wild conspiracy theory—the fact remains that the government is on record trying to create that very thing.