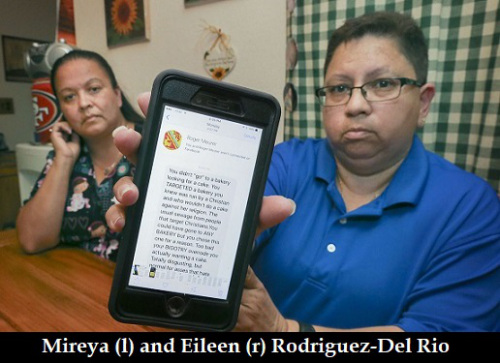 In October 2017, two lesbians, Eileen and Mireya Rodriquez-Del Rio, sought to buy a wedding cake from Tastries Bakery in Bakersfield, CA, for their upcoming same-sex marriage.

The owner of the bakery, Cathy Miller, said she must decline “because she does not condone same-sex marriage,” but that she would send their order to another bakery, Gimme Some Sugar.

The lesbians filed a complaint before California’s Department of Fair Employment and Housing (DFEH), which sided with the lesbian couple and ordered Miller to provide the cake on the grounds that:

“The State of California brings this action under the Unruh Civil Rights Act, Civil Code section 51, against defendants Cathy’s Creations, Inc. and Cathy Miller. Miller refuses to design and create wedding cakes to be used in the celebration of same sex marriages. She
believes that such marriages violate her deeply held religious convictions. The State seeks to enjoin this conduct as unlawfully discriminatory. The State brings the action upon the administrative complaint of a same-sex married couple, complainants Rodriquez-Del Rios.
The State cannot succeed on the facts presented as a matter of law. The right to freedom of speech under the First Amendment outweighs the State’s interest in ensuring a freely accessible marketplace.
The right of freedom of thought guaranteed by the First Amendment includes the right to speak, and the right to refrain from speaking. Sometimes the most profound protest is silence. […]
The State’s purpose to ensure an accessible public marketplace free from discrimination is a laudable and necessary public goal. […] No artist, having placed their work for public sale, may refuse to sell for an unlawful discriminatory purpose. No baker may place their wares in a public display case, open their shop, and then refuse to sell because of race, religion, gender, or gender identification.

The difference here is that the cake in question is not yet baked. The State is not petitioning the court to order defendants to sell a cake. The State asks this court to compel Miller to use her talents to design and create a cake she has not yet conceived with the knowledge that her work will be displayed in celebration of a marital union her religion forbids. For this court to force such compliance would do violence to the essentials of Free Speech guaranteed under the First Amendment. […]

Such an order would be the stuff of tyranny. Both sides advocate with strong and heartfelt beliefs, and this court has a duty to ensure that all are given the freedom to speak them. The government must remain neutral in the marketplace of ideas.1

No matter how the court should rule, one side or the other may be visited with some degree of hurt, insult, and indignity. The court finds that any harm here is equal to either complainants or defendant Miller, one way or the other. If anything, the harm to Miller is the greater harm, because it carries significant economic consequences. When one feels injured, insulted, or angered by the words or expressive conduct of others, the harm is many times self—inflicted. The most effective Free Speech in the family of our nation is when we speak and listen with respect. In any case, the court cannot guarantee that no one will be harmed when the law is enforced. Quite the contrary, when the law is enforced, someone necessarily loses. Nevertheless, the court’s duty is to the law. Whenever anyone exercises the right of Free Speech, someone else may be angered or hurt. This is the nature of a free society under our Constitution.“

Judge David Lampe’s ruling will be a precedent for the U.S. Supreme Court to consider in Masterpiece Cakeshop v. Colorado Civil Rights Commission, wherein Colorado baker Jack C. Phillips argues that the First Amendment’s free speech and free exercise of religion clauses give him the right to refuse wedding services to a same-sex couple, despite public accommodations laws that require businesses that are open to the public to treat all potential customers equally.