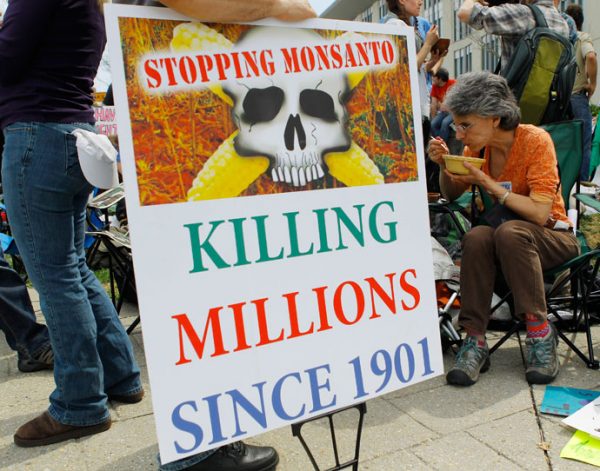 (Natural News) Documents that have come to light recently show that Monsanto continued to make and sell polychlorinated biphenyls (PCBs) for eight years after they knew that they were hazardous to the environment and human health.

The firm was already exposed for this practice when internal documents were digitized and posted as part of the Poison Papers Project, but notes from a Monsanto meeting that were recently posted on Toxicdocs show just how callous they were about the matter.

Monsanto set up a meeting on August 25, 1969, to address the problem of their PCBs in the environment. During the meeting, executives set out three approaches they could use. The first was to go out of business. The second? “Sell the hell out of them [PCBs].” Yes, you read that correctly. Their third option was “Try to stay in business in controlled applications.”

The hand-written meeting notes can be viewed on the ToxicDocs database for free, along with millions of other incriminating documents showing corporate misconduct when it comes to asbestos, lead poisoning, and other toxins.

One would like to imagine that a company selling toxic wares would pull them from the market or close down altogether, but that’s not what happened here. In fact, in the year and a half that followed, Monsanto moved more PCBs than they ever had in the past, selling “the hell out of them” indeed. It wasn’t until 1977 that they finally stopped selling them.

Monsanto knew about the dangers of PCBs for a long time

Monsanto started manufacturing PCBs back in 1935, eventually dominating global production. The chemicals were used as lubricators in electrical equipment and as coolants. They were also found in paints, flame retardants, and refrigerators. They break down extremely slowly, and they continue to affect the environment to this day while also accumulating in the food chain.

A different internal memo that was released in the Poison Papers dated September 1969 says that Monsanto’s strategy for dealing with PCB leakages in the San Francisco Bay, Great Lakes, and Gulf Coast areas should be to “let govt prove its case on a case by case basis.”

They go on to add: “We can prove some things are ok at low concentration. Give Monsanto some defense. We can’t defend vs everything. Some animals or fish or insects will be harmed.”

The documents also show that the company admitted later that year that PCBs are highly toxic to birds.

Another document, their pollution abatement plan, stated: “The evidence proving the persistence of these compounds and their universal presence in the environment is beyond questioning.”

Their knowledge of the harms of PCBs actually goes back much further, however. In 1937, autopsies showed that three of the firm’s workers died from serious liver damage caused by handling the substance.

A document from September 1955 read: “We know Aroclors [PCBs] are toxic but the actual limit has not been precisely defined.”

Company must answer for its misdeeds in court

Monsanto is facing PCB contamination lawsuits from authorities in Oakland, Berkeley, San Diego, Portland, San Jose, Seattle, Long Beach, and Spokane, among other places. The state of Oregon recently filed a $100 million lawsuit against Monsanto for cleaning up the damage caused to the state’s rivers and waterways, while the state of Washington is also suing the firm for PCB cleanup costs to the tune of billions of dollars.

In May 2016, a jury in St. Louis awarded plaintiffs suffering from non-Hodgkin lymphoma due to PCB exposure $46.5 million in damages from Monsanto and three other companies.