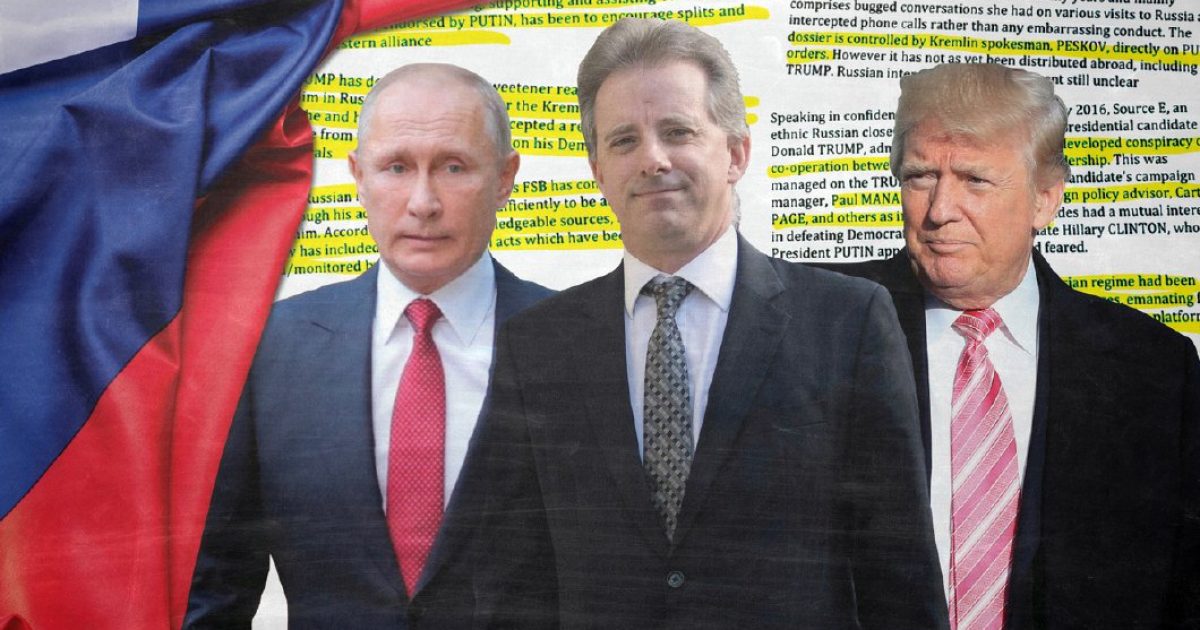 Following the release of the FISA memo last week, it was discovered that there is a second memo that allegedly shows that the story behind the phony, Clinton-funded dossier is worse than anyone imagined.

Sean Hannity dropped the bombshell news on his program on Tuesday.

This second, heavily-redacted memo was released by Senators Chuck Grassley and Lindsey Graham, and seems to reveal exactly why they are claiming that ex-British spy Christopher Steele, the author of the dossier, is considered a criminal.

Just this week, it was reported that Steele failed to show up to court for a long-requested deposition in London on Monday.

“Grassley and Graham tell us that, while working on a second dossier for Clinton opposition research firm Fusion GPS, Steele was being fed information directly from the Obama State Department and from Clinton allies as well as his usual, sketchy Russian sources,” said Hannity in his opening monologue.  “That’s right, teams Clinton and Obama were working with a foreign spy to undermine then-candidate Donald Trump.”

Hannity went on to elaborate on the contents of the memo, which you can read below.

The Grassley-Graham memo goes on to say “it’s troubling enough that the Clinton campaign funded Mr. Steele’s work, but [worse] that these Clinton associates were contemporaneously feeding Mr. Steele’s allegations. It raises huge additional concerns about his credibility.”

So, in addition to Hillary Clinton and the Democratic National Committee paying $12 million for a phony, fake-news Russian propaganda dossier to influence the election, we now learn that her associates and the Obama State Department teamed up with Russian sources to funnel allegations to Steele for a second dossier.

The senators are also accusing Christopher Steele of lying either to the FBI or to the British courts.

“There is substantial evidence suggesting that Mr. Steele materially misled the FBI about a key aspect of his dossier efforts, one which bears on his credibility,” they wrote.

This Grassley-Graham memo also details how Steele was using his first phony dossier to brief several mainstream media outlets, you know, the folks who bring you fake news, in the summer and the fall of 2016. British court records show Steele acknowledged he peddled his memo to The New York Times, Washington Post, Yahoo News, The New Yorker, and, of course, CNN.

However, since he was working for the FBI, he would have been barred from leaking to the media. In fact, the FBI later cut ties with him when it learned he had broken the rule. So who did he lie to, the FBI or the British courts?

It’s hard to keep all the memos and dossiers straight. If you’re scoring at home, the House Permanent Select Committee on Intelligence released a memo over the objections of Democrats and the media that showed how the FBI used Steele’s first dossier to get a federal warrant to spy on people close to Trump. The Democrats hope to release their own “memo,” which is not a memo at all but just a sour-grapes rebuttal to the committee’s. The Grassley-Graham memo is a third document that tells us Obama and Clinton operatives fed Steele information to try to damage Trump.

The dossiers, and there are apparently two of them, were cooked up by Steele and are completely unverified claptrap. Yet, the FBI marched one of them into a Foreign Intelligence Surveillance Court and presented it as evidence. Months later, then FBI Director James Comey admitted it was completely unverified.

And here’s what the left and your corrupt media won’t tell you: the FISA judge was never told that Hillary Clinton was paying for the phony dossier containing Russian intelligence lies about Donald Trump. And they don’t seem to care that it was first used to try to influence an election, then to get a warrant to spy on an opposition candidate.

The incestuous ties between Fusion, Steele, the Clinton campaign and the Obama Justice Department are alarming. Clinton hired Fusion, which hired Steele. Steele was working with the FBI at the same time. The wife of a top Justice Department official, Bruce Ohr, was hired by Fusion to work with Steele.

The goal of the whole, unseemly syndicate? To launder Russian lies about Donald Trump through the U.S. government, so they could weaponize our own intelligence and law enforcement network against the man who now sits in the Oval Office.

You should be scared. And disgusted.

I don’t think we should be scared.  I think we should be outraged that justice has not prevailed in all of this.  We have evidence of criminal activity for political purposes.  One could make a case that this is treasonous, which could go right along with other cases for treason in the Obama administration.

Meanwhile, Robert Mueller continues an investigation at the expense of taxpayers into alleged Russian collusion that was tied to an unverified dossier, which we now know was funded by the Hillary Clinton campaign, aided by the Obama State Department and written by a foreign spy.  One has to wonder why President Trump hasn’t simply fired Mueller, given the information that has been released and spare the American people the expense and political drama of this witch hunt.