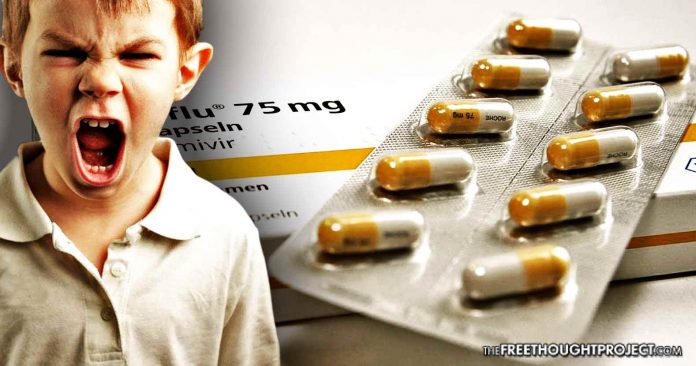 The 2017-2018 flu season is turning out to be one of the worst outbreaks in recent history. Already this year, the flu has claimed the lives of dozens of children and hospitalized countless others. In the midst of the turmoil and sickness, however, the medication to treat the flu—Tamiflu—is also reportedly claiming lives.

As this is one of the worst outbreaks, the makers of Tamiflu are seeing record sales. However, this is not good for the children whose parents are coming forward to expose the horrendous side effects caused by the medicine which—in some instances—have proven to be far worse than getting the flu.

Oseltamivir, the antiviral medication marketed as Tamiflu, is used to treat flu symptoms caused by influenza virus in patients who have had symptoms for less than 2 days. While there are plenty of common side-effects ranging from hives to difficulty breathing, some of the less common side effects have parents crying foul.

Some people using Tamiflu have had rare side effects of sudden confusion, delirium, hallucinations, unusual behavior, or self-injury. Adding to the ominous nature of these side-effects is the fact that these symptoms have occurred most often in children.

Last month, 16-year-old Charlie Harp was given Tamiflu, the entirely normal boy then took his own life hours later.

“Had I known this was an issue, I would’ve never given it to him,” remarked Jackie Ray, Harp’s aunt and guardian.

The parents of a six-year-old little girl gave their daughter Tamiflu and she began hallucinating, ran away, and then tried to kill herself by jumping out of a window.

“She was about to jump out the window when my wife came up and grabbed her,” recalled the girl’s father, who wanted to stay anonymous.

As KRBK reports, the Wallens say their 2-year-old son, Steven, was twitching, hallucinating, and slamming his head in pain after taking the medicine after being diagnosed with the flu.

“When I walked in the room I was greeted with him slapping me across the face, and then continually smacking his head into the pillow saying ‘ouch, ouch, ouch,’” says Andrea Wallen, Steven’s mother.

When they stopped giving him Tamiflu, the erratic behavior stopped.

Among them: “neuropsychiatric” side effects.

Because there are so many people now taking Tamiflu, the side-effects are skyrocketing. “We are seeing the side effects more this year than we’ve seen it in previous years, but that’s just because the total number of kids taking the medication has gone up, not because there’s something wrong with the medicine itself,” cautioned Dr. Edwards.

However, while these dangerous side effects are rare, they are experienced by one to two percent of children. A one in fifty shot that your child may try to take their own life is a pretty big deal. Parents are now faced with the choice to medicate their kids to fight the flu virus or let them ride it out.

Doctors are urging parents to consider their options when their child has the flu, only recommending that high-risk children get the medicine and if they do take it, watch them closely.

“For the parents who are insisting that their kid get Tamiflu because of how scared they are about the pediatric deaths we’ve had, if your kid is not high risk, then you do need to think about the fact that this drug does come with side effects, and so we do not give it to every person that has influenza routinely,” Dr. Edwards explained.

If your child has taken Tamiflu, experts are saying to take them to the hospital immediately if they experience any change in behavior.