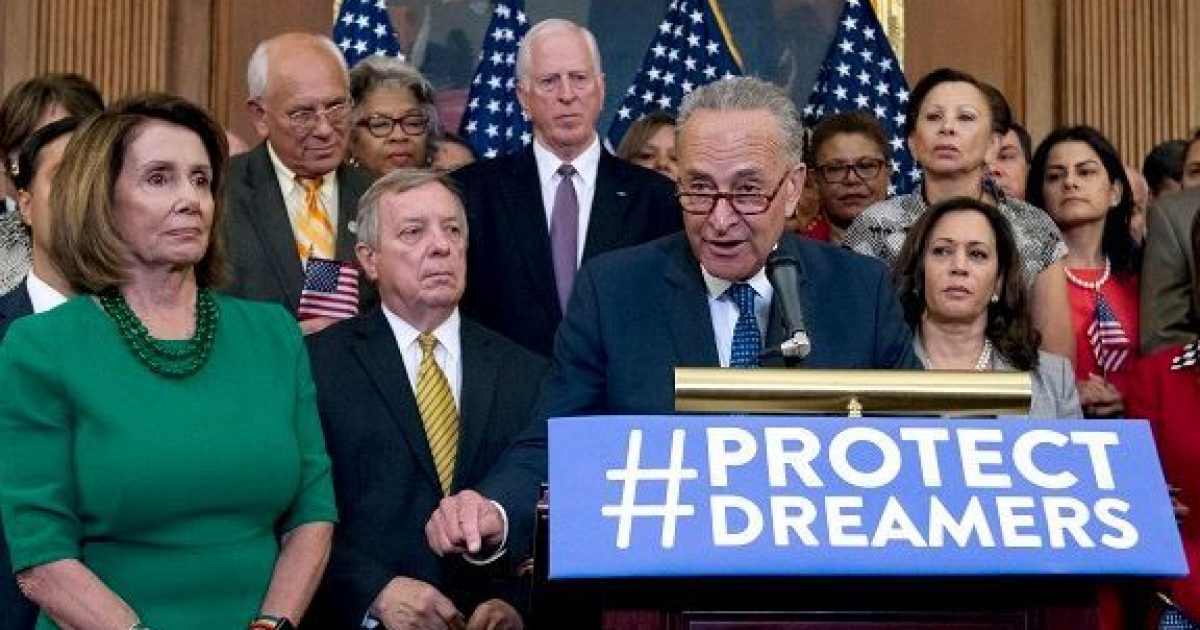 The movement to legalize the illegal will never stop until the untold millions of undocumented Democrats have the right to vote. Eternally shopping for the a perpetual majority so they can finish the work of fundamentally transforming America the Progressives agitate ceaselessly for amnesty.

If DACA is ever passed it will become the vehicle for millions of low information voters dependent on the government to overflow our system in a tsunami of votes for bigger government.   The courts will stretch it to cover anyone and everyone.

If we don’t have merit-based immigration system, what do we have?   If we don’t pick the best and the brightest, who do we pick?   If we don’t bring in people who will be a benefit to our society, who are we bringing in?   Are we instead bringing in those without merit, the worst and the dimmest, and those who are a drag on the system?   Oh yes, that sounds like a prescription for success.

Illegal aliens and open borders activists with “United We Dream,” a group that is partially-funded by globalist billionaire George Soros, have been staging demonstrations around the country.   Does anyone else find it interesting that people who are in our country illegally can openly demonstrate, march, and protest and nothing ever happens to them?

Here are some examples of how ridiculous this has become:

Illegal alien activists held a mock funeral in the U.S. Senate rotunda, saying that because Congress and President Trump have not given them amnesty, “they are killing our dreams.”

John Binder of Breitbart reports, “A group of mostly illegal aliens and open borders activists with the group ‘United We Dream’ gathered in the Senate rotunda on Wednesday to demand an immediate passage of a full-scale, expansive amnesty plan that would potentially give legal status and a pathway to U.S. citizenship to all of the 12 to 30 million illegal aliens living in the U.S.”

As the group of illegal aliens and open borders activists — with the George Soros-funded group “United We Dream” — stormed Tillis’ office demanding amnesty, one illegal alien from North Carolina shouted, “F*ck this conservative! F*ck this person!”

Do things like that sound over the top to you or is just me?   How can we allow people who are here illegally to invade our government offices and attempt to intimidate our representatives into making their illegal actions legal?   What about the rule of law.

What’s next? Will thieves storm police stations to hold demonstrations demanding that theft is made legal?

Dr. Owens teaches History, Political Science, and Religion. His books include; The Constitution Failed, The Azusa Street Revival, America Won the Vietnam War, and NEVER FORGET! You can follow Dr. Owens on Twitter and Facebook