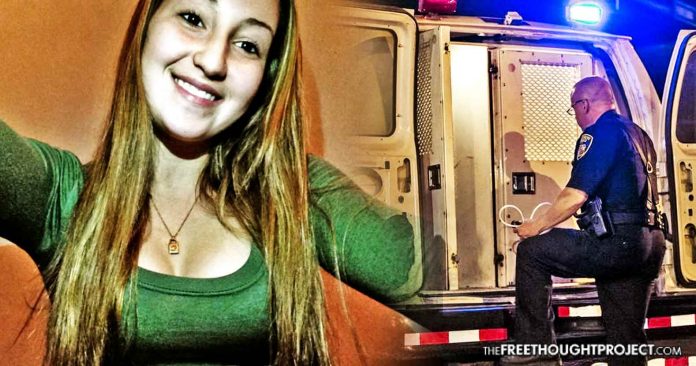 It has been over four months since then 18-year-old Anna Chambers (not her real last name) accused two on-duty NYPD officers of raping her in the back of a police van on the night of September 15th, 2017. As emphatically as she claims she was raped and did not consent to having sex with two police officers, she asserts not only have the police continued to attempt to intimidate her but the very justice system she’s now looking to for help is set up to help the alleged rapists.

In other words, defense attorneys have been victimizing the victim, attempting to discredit her story by bringing up her past, and insist the sex between two cops was consensual. She’s endured hours upon hours of depositions, cross-examinations, and had to explain her various social media posts and comments to defense attorneys. She’s also had to be present in the same courtroom where she says her attackers sat mere feet away from her.

The attempts to intimidate Anna started before she even left the hospital where she went to have a forensic exam performed by emergency room personnel. As statistics reveal, few rape victims ever present at the emergency room and file a police report, but when the perpetrators are police officers, surely the courage to make such accusations does not go unnoticed. The police noticed. According to Anna, there was a steady stream of police officers from varying ranks walking by her hospital room the night she was allegedly attacked.

That fateful night back in September, Anna was stopped by two of NYPD’s finest who told her she was being taken into custody for marijuana possession. Her two male friends were told to leave and the cops took only her. After the police officers reportedly told her friends not to follow the police van, the two had other things in mind for her. According to Buzzfeed News:

Anna said the detectives took turns raping her in the backseat as the van cruised the dark streets and as she sat handcuffed, crying and repeatedly telling them “No.” Between assaults, she said, the van pulled over so the cops could switch drivers. Less than an hour later, a few minutes’ drive from where it all began, the detectives dropped Anna off on the side of the road, a quarter-mile from a police station, surveillance footage shows. She stood on the sidewalk, her arms wrapped around her chest, looking up and down the dimly lit street and pacing slowly before borrowing a cell phone from a passerby to call a friend.

Surely dropping her off near the police station is not standard procedure when someone is being arrested for pot possession. But defense attorneys aren’t interested in such minor details. They’re too busy combing through her social media accounts, her sexual history, and her comments on Facebook to enter into any plea bargaining. And the law is on their side.

It turns out Anna happens to live in one of 35 states where police officers can claim sex with someone they have taken into custody was consensual. Buzzfeed News describes the situation in New York:

It is one of 35 states where armed law enforcement officers can evade sexual assault charges by claiming that such an encounter — from groping to intercourse — was consensual.

All of this means if the jury believes the police officers’ testimony over Anna’s, they’re going to walk free, probably get their jobs back, and continue to hide behind their badge when they have sex while on duty.

Anna isn’t taking it lying down. She’s been voicing her objections to being subjected to the legal system’s definition of justice. When Anna’s story was questioned by a skeptic, she replied with reason:

Listen man it doesn’t fucking matter they’re on duty police officers its a fucking violation these are the people we call for help not to get fucked.

Buzzfeed’s Albert Samaha researched the phenomena of police officers being accused of rape. He said of the 700 officers accused of sexual assault of someone in custody since 2006, only 158 officers actually had criminal charges filed against them. Of those, 26 officers had their cases dismissed or charges reduced because of the consent loophole.

Anna reportedly told Buzzfeed she came forward so that other victims will do the same. She said she wanted “to encourage other victims to come forward,” adding, “Police aren’t supposed to be doing this.” Watching her story “blowing up” reportedly leaves her optimistic the phenomena of police officers using their badge to engage in on-duty sex with detainees will cease and that more women can find justice. She said, “all it took was one voice.”

If there’s ever been a time and an occasion where politicians could make a noticeable difference with public policy it is now, in the middle of the #metoo movement. How easy would it be for legislatures all across the 35 states, where sex with detainees is legal, to pass laws banning such claims of immunity.

It is important to point out that even if the sex is consensual, the officer’s position of authority over their detainee removes the ability to consent as the threat of arrest or charges could dangle over the victim’s head as a reason to engage in sexual acts. Being threatened with jail time to have sex with a cop is hardly “consent.”

Many critics believe that not only should all police officers who have sex on duty be fired (even if it’s between co-workers) but mandatory charges and minimum sentencing for police officers should exist for any law enforcement officer who has sex with detainees.

Doing so would set a high standard of accountability for law enforcement agencies across the country, and rid the courts of such cases of he said/she said consensual sex claims. Both officers’ DNA was found on Anna’s person. She says she was raped. They say it was consensual but ignore the fact that they had kidnapped her and held her as their prisoner. The courts will now decide.

As for Anna, she says police are continuously posted outside her home in an attempt to intimidate her. She also says she was charged with marijuana possession weeks after she came forward with her rape allegations.