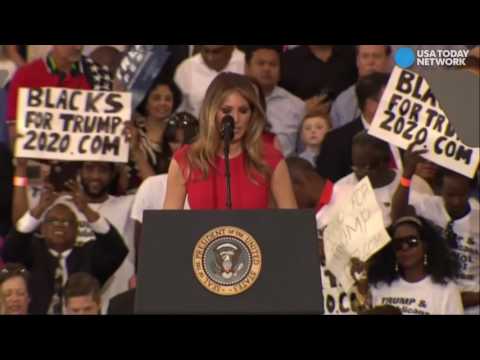 The Left are sure to go into another meltdown when they learn that Melania Trump had the White House exorcised before moving in.

Paul Begley is the pastor of the Community Gospel Baptist Church in Knox, Indiana. In a CNSNews audio recording (below), Begley said:

“When the President [Trump] allowed 40 pastors to come into the White House and . . . lay their hands on him –seven times he’s done this– that’s unheard of, we have never. I mean the guy has got flaws, we all do. But at least he’s humble in recognizing that he needs God enough that he keeps bringing them in for prayer. I gotta say this: It might have started with the First Lady [Melania], I’d be honest with you.”

“The First Lady, in the five hours when the Obamas and the Trumps were down in the Capitol and Trump’s being sworn in as the 45th President of the United States, Melania Trump said to her husband, ‘I’m not going to go into that White House unless it has been completely exorcised.’

I mean because apparently, over the eight years that the Obamas were there and maybe even some of the presidents before him, there were all kinds of idol gods and images, and all kinds of artifacts in there that were demonic, even some of the stuff left over from the Clinton era ’cause they were really tied in with the Haitians. I can tell you if you read The Serpent and The Rainbow story, you’ll find out just how much Haitian witch-doctor influence was in Bill Clinton and Hillary Clinton’s lives. They constantly went back there. They spent their honeymoon with a witch doctor! Who does that?”

Note: Begley is referring to Wade Davis’ book, The Serpent and The Rainbow: A Harvard Scientist’s Astonishing Journey into the Secret Societies of Haitian Voodoo, Zombis, and Magic. See also:

“But Melania said, ‘You gotta get all that all of there. And send in some preachers, priests (she wanted priests, anyone), go in there and cleanse the White House or I would not spend one night in there.’

And he [Donald Trump] did! During the five hours when they were changing carpets and drapes, there were people in there packing up every item. The only thing left was one cross on one wall. They cleansed the White House. They had people anointing it with oil, praying everywhere.

This was a major spiritual . . . you’ve got to take the seat of authority when you go into spiritual warfare, you start with the spiritual authority and then it goes from there out. And I think that might have been where the whole thing began — in a mighty way of exorcising the demons.”