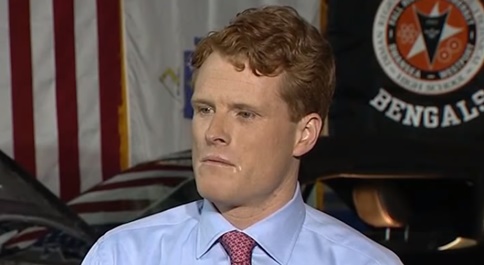 An heir to his great-grandfather Joseph Kennedy’s fortune, Joe #3 holds substantial investments in trusts and is estimated to be worth between $20 million and $60 million.

On January 30, 2018, a drooling Joe #3 gave the Democrat Party’s response to President Trump’s State of the Union address.

A practicing Catholic with a sweet tooth, in 2017 Joe #3 gave up sugary snacks for Lent. But he and his wife, health policy lawyer Lauren Birchfield, are stridently pro-abort, never mind the fact that the Catholic Church calls abortion an intrinsic — i.e., non-negotiable — evil.

Below is a pic of the couple at a pro-abort rally, garbed in pussy-pink T-shirts that say: “I stand with Planned Parenthood” — the same Planned Parenthood abortion mills that harvest and sell aborted babies’ body parts and organs, including the brain of a baby whose heart was still beating when his brain was “harvested”.

By the way, there are claims on the net that Joe Kennedy III lives in a mansion surrounded by a wall (see below) — evidence of his hypocrisy when he grandly proclaimed in his Democrat Party response: “Build a wall and my generation will tear it down.”