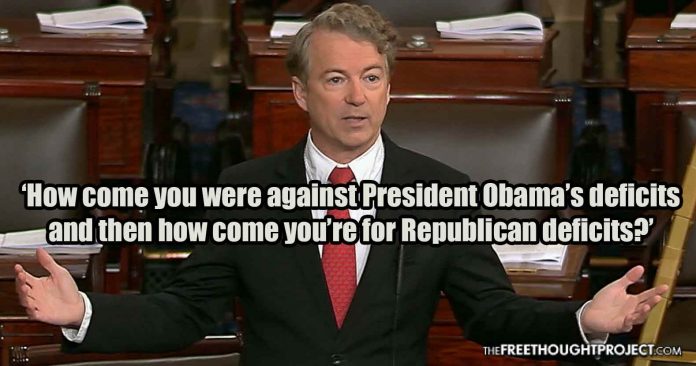 President Trump signed a massive spending bill into law on Friday morning, but it was not until after the Senate heard from one of its biggest critics on untamed government spending, Rand Paul, who accused both Democrats and Republicans in Congress of “spending us into oblivion.”

One of the most glaring problems with the two-year budget deal is that it removes existing spending caps and increases the government’s discretionary budget by more than $400 billion. The main purpose of Paul’s speech was to call for a vote on an amendment to restore the spending caps.

Make no mistake, I will always stand up for fiscal responsibility, regardless of which party is in power, and I will continue to call the Republican Party home to the ideas that led to Americans trusting us with government in the first place.

“The reason I’m here tonight is to put people on the spot,” Paul said on the Senate floor. “I want people to feel uncomfortable. I want them to have to answer people at home who said, ‘How come you were against President Obama’s deficits and then how come you’re for Republican deficits?’”

Paul also criticized the trend of waiting up until the last minute before a looming “government shutdown,” and then combining all of the smaller spending bills together into one massive bill that must be passed in order to keep the government open.

“The bill is nearly 700 pages. It was given to us at midnight last night, and I would venture to say no one has read the bill. No one can thoroughly digest a 700-page bill overnight, and I do think that it does things that we really, really ought to talk about, and how we should pay for them. One of the things this bill does is that it is going to add $500 billion in spending over a two-year period. This bill increases spending 21 percent. Does that sound like a large amount? Is anybody at home getting a bonus or an increase in your paycheck of 21 percent? And yet, your government is going to spend 21 percent more without really having a full debate, without having amendments.”

Paul argued that the Republicans who criticized deficits and the massive national debt under the Obama administration have become the definition of “intellectual dishonesty” and “hypocrisy” by supporting the same measures now that a Republican is in office.

The amendment Paul proposed referenced restoring the budget caps that were put in place on both military and non-military spending in 2011, a time when “government actually shrank,” according to Paul.

Paul has a reputation as a vocal critic of the many programs the U.S. government has which fund foreign dictators and destructive conquests in other countries. During his Thursday night speech, he also criticized some of the programs within the U.S. that have cost Americans hundreds of thousands of dollars.

“The government, in their infinite wisdom, took $700,000, which, by the way, was supposed to go to autism research, and they decided to study Neil Armstrong’s statement,” Paul said. “So someone at some university had to play the tape over and over to see what he said. $700,000 later—they couldn’t decide.”

As the U.S. government lurches from one shutdown to the next, Paul questioned whether the American people were actually satisfied with their government, which appears to be made up of representatives who pass “trillion-dollar deficits” and who “just don’t seem to care” about the direction of the United States.

“They care somehow more about this clasping hands, and everybody gets everything, and you get to get home for the weekend? But I think the ramifications for our country are severe and significant,” Paul said. “And what I would ask my colleagues, as well as those across the country is basically, what do you want from government? Do you want some physical item? Is government here so government can give you some physical item, a cell phone or car? Is that what government is for, or is government here to preserve your liberty?”