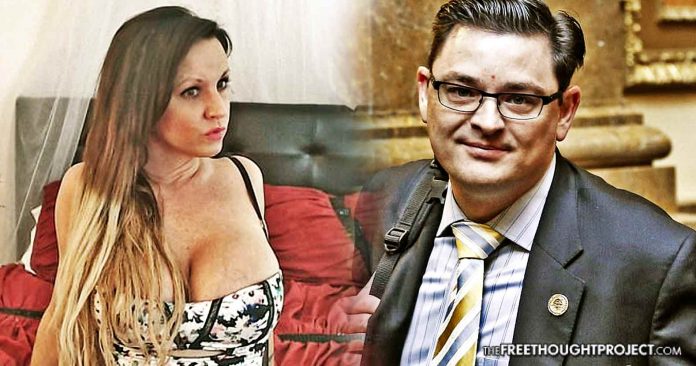 When it comes to the government, in general, the notion of ‘do as I say, not as I do’ rings true through every level, from the parking transit officer to the president.

The most recent case of government hypocrisy comes from a Utah lawmaker, who has been devoting much of his career to making sure sex workers suffer if they are caught by police. The staunch advocate of tougher penalties for prostitution, however, was just busted using taxpayer money to pay for hotel rooms to have sex with prostitutes.

In one particular exchange, Taylor asks Stanard if she should bring any ‘accessories’ or ‘toys’, perhaps a ‘corset’, reported the news site.

As the Mail notes:

The conservative politician was elected to the Utah House of Representatives in 2012 and has three children with his wife LeeAnne. Last year, 43-year-old Stanard, of St. George, Utah, voted in favor of stricter laws on prostitution, including increasing the penalty for soliciting sex to $2,500.

In spite of claiming on his website that he is a “strong advocate for conservative family values. I am pro life, as well as for traditional marriage,” it appears that like many politicians, Stanard says one thing and does another.

As the text messages show—which was confirmed to by the actual phone number listed on his public profile on the Utah House of Representatives website—this hypocrite met with Taylor twice while pushing for laws that would’ve punished his companion even harder if they would’ve been caught in the act.

House chief of staff Greg Hartley told the Associated Press that the married Stanard — who resigned Tuesday night — was reimbursed for two hotel stays while he was attending legislative meetings at the state capital.

“It looks like they were legislative days,” GOP House Speaker Greg Hughes said.

In typical government fashion, Hughes said that he is not sure if they will require Stanard to pay back the money he spent getting a prostitute.

“If there has been an abuse of public funds or if public funds were used in a way that’s inappropriate, we would,” he said. “I don’t have solid answers for those things. I would need to have a way that I would know conclusively that that is the case.”

Stanard’s attorney Walter Bugden told the DailyMail.com: “Given the current climate in this country with misconduct allegations and the way things are happening in the media right now, there isn’t any explanation that my client could give that would overcome the shadow of these allegations.

“He has resigned his office.”

Naturally, Stanard is claiming he stepped down for family reasons and not because he was busted hypocritically hiring a prostitute while simultaneously trying to bury them in debt and prison.

As TFTP has previously reported, in the Land of the Free, it is against the law to get paid to have sex, unless that sex is filmed, distributed on DVD, and taxed. One of the least talked about systems of oppression in the US is that of persecuting prostitutes.

When referencing prostitution, we are talking about the mutually beneficial exchange of sexual favors for money by two or more consenting partners; not forced human trafficking.

Because the demand for sex is pushed into dark alleys and late night street corners, a woman working in the sex trade becomes far more vulnerable than if they were legally allowed to operate out of brick and mortar setups. This danger of working on the street drives the need for protection from pimps who are often more abusive than any customer would be.

Despite the tens of thousands of arrests each year, the market has found a way to provide the service of sex using safer solutions. In spite of the laws, sellers of sex have found ways to safely conduct business by setting up “massage” parlors, using phone books, and, of course, the internet.

Besides being an immoral gang of thieves, the state is also relentless. They have deep pockets of extorted tax dollars of which to dig in to enforce their distorted will on the people.

Despite prostitution arrests dropping from 2001 to 2010, the cost of arresting people for sex remains staggeringly high. Individual cities continue to spend up to $23 million a year stopping people from having voluntary sex.

Meanwhile, involuntary sex goes uninvestigated at an alarming rate. Hundreds of thousands of rape kits are sitting in police departments across the country — collecting dust, as cops petition the government to allow them to have sex with prostitutes so they can then bust them.