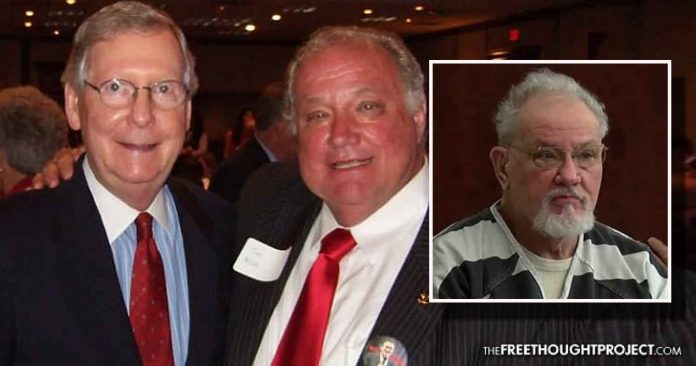 California, KY — Former District Court Judge and school board member Tim Nolan plead guilty to 21 counts of human trafficking on Friday. In court it was revealed that the judge threatened young women and girls under the age of 18 with arrest to force them into sex. On one occasion a victim was living on his property and he forced to evict her if she did not have sex with him. He also gave numerous victims heroin.

As TFTP reported at the time of his arrest, Judge Tim Nolan of California, Kentucky represented District 5 on the Campbell County School Board. He served at the chair of the 2016 Donald Trump campaign in Campbell County.

During Trump’s presidential run in 2016, Judge Nolan was serving as the chair of his campaign. The alleged sex trafficking occurred in August of 2016 — while Nolan was working on the Trump campaign.

As RCN reports, Nolan is an outspoken and controversial figure in local politics. In 2016, he sued the creator of GOPfacts.org, which took aim at Nolan and others, and specifically referred to Nolan as a vehement racist and posted a photo that purported to be of Nolan in a Ku Klux Klan robe.

Nolan was appointed by Governor Matt Bevin to the Kentucky Boxing and Wrestling Commission but was removed only days later when the Klu Klux Klan scandal erupted.

Unlike Governor Bevin, however, Trump did not remove the Judge from his campaign.

Among the charges that Nolan pleaded guilty to were human trafficking, attempted human trafficking and giving drugs and alcohol to minors. According to charges read in court, Nolan told one of his victims that he would “call his friends in the FBI and other law enforcement to arrest her.”

“The punishment in this case does not undo the trauma inflicted on the victims, but it brings closure and some justice. I want to thank the Campbell County Police Department and our special prosecutions team for working this case,” Attorney General Andy Beshear in a statement.

Nolan’s attorney, Margo Grubbs, actually tried to downplay the charges that her client pleaded guilty to.

“He took full personal responsibility for these acts that in his potential day and generation would not necessarily be considered to rise to the level of human trafficking,” Grubbs said.

She also accused the victims of lying, despite Nolan’s guilty plea.

“I’m saying the underlying facts as alleged by victims do not necessarily equate to what really happened,because we all know in life there are two sides to every story. The sad part of it is, often times the criminal defendant finds themselves at an insurmountable obstacle in order to prove complete innocence,” Grubbs said.

Her comments are insanely ironic considering the fact that Nolan spent his career presiding over the cases of nonviolent offenders, where they were sent to jail in situations where it was impossible to prove they’re innocent. It is likely that Nolan did not give this a second thought when the shoe was on the other foot.

Grubbs then went on to suggest that his position as a government figure should should somehow absolve him of his crimes, despite the fact that he used his position to get away with them.

“Mr. Nolan has been a public servant to the people of Campbell County for a majority of his life, and at some point there has to be a redemption for those who committed offenses but has to be balanced by what they have given,” she said.

According to Fox19, Nolan will pay a $110,000 fine as part of his plea agreement, a large portion of which will go into the Human Trafficking Victims Fund.

Nolan will be held at the Campbell County Detention Center until his sentencing March 29. If sentenced to the full time that prosecutors are recomending, Nolan will be given 20 years in prison, but will still be up for parole in just four years.