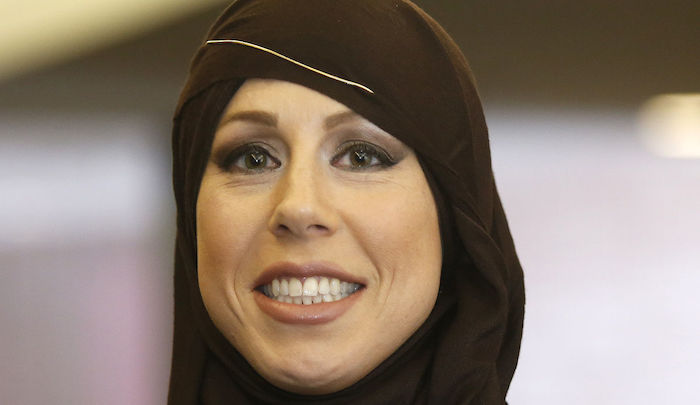 Regina Mustafa says she hopes to be a voice for all of Rochester, but accuses critics of sharia of “fearmongering and hate.” In the second article below, she harshly criticizes Phillip Parish for saying that Islam is the “antithesis of the Constitution.” But it is. Islam means slavery and the U.S. Constitution is a document of freedom. Regina Mustafa is simply not being honest in contradicting this. If there were any enemedia reporters worthy of the name, they would challenge her on sharia oppression of women and non-Muslims, as well as its Jew-hatred and calls for violence. But no one will do that. If she is elected mayor of Rochester, Minnesota, the citizens of Rochester who voted for her will get what they deserve.

Regina Mustafa says she hopes to be a voice for all of Rochester.

The founder of Community Interfaith Dialogue on Islam announced this morning that she is a candidate for Rochester mayor.

“I decided the mayoral race is the best fit for me,” she said. “I’ve had a vested interest in city government for awhile.”

In December, Mustafa said she planned to seek local political office but had not decided which position to pursue.

Earlier last year, she began a campaign for the 1st Congressional District after Rep. Tim Walz announced plans to run for Minnesota governor, but she suspended that campaign in October.

However, Mustafa said that didn’t end her desire to give back to her community.

“This city has given me so much, and I look forward to serving as Rochester’s next mayor and working to create a city that is welcoming and inclusive for all,” she said. “Affordable housing, a livable wage, and public transit will be top priorities.”

Mustafa moved to southern Minnesota 12 years ago from Philadelphia. She and her husband are raising two children, and she is pursuing a masters degree in Human Services from Winona State University — Rochester….

A long-shot Republican gubernatorial candidate is getting national attention for writing that he does not consider Islam a faith and that it is “the antithesis of the Constitution.”

Phillip Parrish, of Kenyon, wrote the comments in an email to Community Interfaith Dialogue on Islam founder Regina Mustafa. Mustafa, of Rochester, sent Parrish an email inviting him to sit down with her after learning he had recently attended a meeting featuring Usama Dakdok, an outspoken critic of Islam.

“I do not object to you attending his presentation, but wanted to know if you would like to speak to a Muslim about Islam. Since you have attended this talk about my faith, I figured you would also like to hear from a person who actually practices Islam,” wrote Mustafa, a former DFL candidate for the 1st Congressional District seat.

Parrish responded by saying he would be willing to meet but that “I separate Islam from the word faith because faith takes belief and Islam requires only submission.” He added that he would ask her to publicly denounce Sharia law and declare that “Islam, Sharia and the Quran are the antithesis of the U.S. Constitution.”

Mustafa posted the email exchanges on her Facebook page. Since then, Parrish’s response has drawn sharp criticism from civil rights organizations. The Southern Poverty Law Center wrote about Parrish’s comments on its “Hatewatch” blog. Muslim Advocates, a nonprofit based in Oakland, Calif., blasted Parrish’s remarks.

“Anti-Muslim bigotry like this emboldens those who would discriminate or commit acts of violence against Muslims. We’ve seen hate crimes, violence, and bigotry skyrocket as politicians have increased their attacks on Islam and Muslims,” said Muslim Advocates Policy Director Scott Simpson.

Mustafa has called on Parrish to drop out of the Republican gubernatorial race. In a press release, Parrish pushed back, saying he has no intention of leaving the race. In an interview, Parrish accused Mustafa of making a “disingenuous request” to meet with him in order to advance her own propaganda.

What is his response to being called anti-Muslim?

“I see myself as a person attempting to expose those who are attempting to set up rules and laws and regulations contrary to the U.S. Constitution,” Parrish said….

Mustafa rejected the idea that her invitation was in any way insincere. She said she is deeply disturbed by Parrish’s comments, saying they demonstrate a lack of understanding about Islam. She said Muslims in America have demonstrated a respect for both the U.S. Constitution and their religion and his comments are unfair to the Muslim men and women who have served in the U.S. armed forces.

“If you don’t think (Islam) is a faith, then my religious freedoms to you are negotiable and are at risk and I find that very alarming, and if he is saying that to his supporters, it’s the epitome of fear mongering and hate,” Mustafa said….

Rochester DFL Rep. Tina Liebling, a candidate for governor, called on Republican candidates to “denounce Mr. Parrish’s ignorant, islamophobic statement and pledge to encourage peace and understanding among Minnesotans regardless of race, religion, or national origin.”