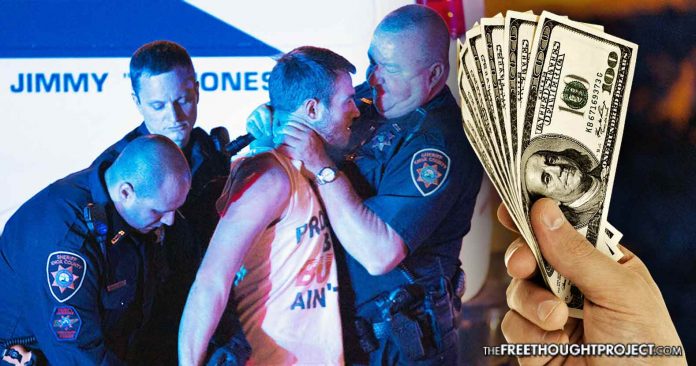 One of the most corrupt policies in place to protect police officers who commit violence in the line of duty is the legal protection that comes when a victim files a lawsuit against an aggressive cop. When a victim of a police assault wins a lawsuit against the police department, the city’s taxpayers are usually on the hook for the restitution fees. However, a new policy change in Baltimore—which will set a revolutionary precedent—will finally have the guilty officers feeling the pain in their pockets for once.

In a memo sent out by police union president Gene Ryan this week, Baltimore City officers were warned about how they could be charged with punitive damage if a jury finds that they acted with malice during an attack on a citizen.

The email stated that:

Most times, the officer who is being sued will dispute the allegations made by a Plaintiff and successfully defend a claim for punitive damages. However, many juries award punitive damages despite the lack of evidence of malice even in cases where the police officer has not been charged criminally and been found to have acted within the scope of his/her duties consistent with the rules and regulations of the Baltimore Police Department. In the past, the City of Baltimore has generally supported the officers by paying punitive damages as well as the compensatory damages awarded for the actual injury.  Since Andre Davis has been named as our new City Solicitor, he has adopted a policy of not paying any punitive damages despite the fact that the Police Officer has been found to have acted appropriately by the office of the State’s Attorney as well as the Baltimore Police Department.

What this means is that police officers are now required to pay these punitive damage awards, which can amount to thousands of dollars, out of their own pockets.  Since punitive damages cannot be discharged in bankruptcy, the successful citizen can file an attachment against your wages taking 25% of your net bi-weekly paycheck until the amount of the punitive judgment is satisfied.

Please keep this in mind as you go about performing your duties.

The email was leaked to Baltimore crime journalist Justin Fenton for The Baltimore Sun, who posted the following tweet on Tuesday.

Earthquake going through the Baltimore police force after this message blasted out by union about city no longer covering punitive damages in lawsuits: “The successful citizen can file an attachment against your wages taking 25% of your pay … Please keep this in mind” pic.twitter.com/uwFTm7Tg1A

City Solicitor Andre M. Davis responded to the leaked email on Wednesday by saying that the union was lying and that this policy has been in place for decades.

Former City Solicitor George Nilson has confirmed this, saying “In the past, the city law department has appropriately refused to pay malice judgments.”

Davis pointed out that the Local Government Tort Claims Act doesn’t require local governments to pay punitive damages for police officers but most local bureaucrats go along doing so anyway without question.

“The statement was flatly wrong in several respects and deeply misleading in other respects. The statute reflects the ordinary common sense notion that if government employees are told that no matter how badly they misbehave, no matter how maliciously they inflict harm or injuries on their fellow citizens, their employer will pay for that harm, then we can expect an increase in such harm. Employees, including police officers who, no doubt have the most difficult job in government, are not privileged to inflict gratuitous injury on others without also incurring personal consequences.” Davis told WBAL.

Davis also took issue with the fact that the email stated that officers are charged without evidence, which is an obviously false claim considering that police are held to a much lower standard than average citizens in the US legal system.

“Instead of speaking out forcefully to encourage FOP members to police in a professional and constitutional manner, as the Commissioner-Designate [Darryl De Sousa] has promised will be his guiding light, and as the federal court consent decree mandates the Police Department to achieve, the FOP leadership’s message seems to be an attempt to dissuade officers from continuing to do their challenging jobs in good faith reliance on the City’s contractual and state law obligation to protect them from baseless lawsuits. This is unfortunate and troubling. Nevertheless, the Law Department will always stand with our officers and give them the legal defense, counsel, and such additional training as may be needed so that they remain on the constitutional side of urban policing in the twenty-first century at all times,” Davis said.

The Baltimore Sun reported that as many as nine Baltimore police officers could have to pay tens of thousands of dollars in damages for recent cases where they found guilty of attacking someone with malice. These cases are reportedly what provoked this recent tantrum from the police union.