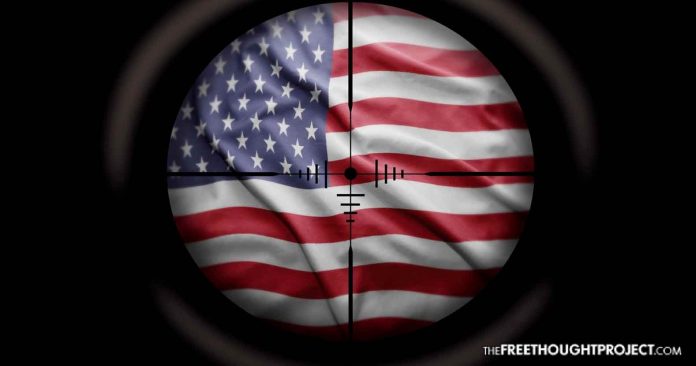 Washington, DC — The Domestic Terrorism Prevention Act of 2018, introduced this month in the House, is making ‘patriot groups’ and citizen militias uneasy and for good reason. It is specifically targeting them.

As the bill’s summary notes, the purpose of the legislation is:

While on the surface this sounds like a rational idea, when we dig deeper into the bill, we discover just what they mean by “preventing domestic terrorism.”

According to the FBI, the definition of a domestic terrorist is “individuals and/or groups inspired by or associated with primarily U.S.-based movements that espouse extremist ideologies of a political, religious, social, racial, or environmental nature.”

The FBI notes the specific example of the two crazy individuals in Las Vegas who killed police officers in 2014,

–for example, the June 8, 2014 Las Vegas shooting, during which two police officers inside a restaurant were killed in an ambush-style attack, which was committed by a married couple who held anti-government views and who intended to use the shooting to start a revolution.

The bill also associates these deranged murderers with the “patriot” label. However, what this bill fails to mention is that these supposed “patriot” movement domestic terrorists were actually banished from real patriot groups because they were on the police payroll and known to be provocateurs.

As the late Will Grigg wrote:

After the Millers murdered three people — Las Vegas Metro Officers Alyn Beck and Igor Soldo, and Joseph Wilcox, an armed citizen who heroically tried to stop their rampage — their former handlers claimed that they were unaware of the couple’s “anti-police sentiments.” That claim is difficult to credit, given that Jerad Miller had a lengthy criminal record, and the fact that the couple had made itself very prominent in protests associated with the Occupy Wall Street movement.

But that is not all. The bill goes on further to credit the Southern Poverty Law Center—a group who makes hundreds of millions of dollars selling hate by labeling anyone they disagree with politically as a hate group.

According to the bill:

According to the Southern Poverty Law Center, in 2015, for the first time in 5 years, the number of hate groups in the United States rose by 14 percent. The increase included a more than twofold rise in the number of Ku Klux Klan chapters. The number of anti-government militias and “patriot” groups also grew by 14 percent in 2015.

Yes, the KKK and neo-nazi groups are abhorrent and deal in hate, but the SPLC doesn’t just target these groups like they used to—thus the reason for the increase in “hate” and “extremist” groups.

As Reason’s John Stossel pointed out recently, “SPLC once fought useful fights. They took on the Ku Klux Klan. But now they go after people on the right with whom they disagree.”

They are also making a killing while doing it.

Morris Dees, SPLC’s co-founder, promised to stop fundraising once his endowment hit $55 million. But when he reached $55 million, he upped the bar to $100 million, saying that would allow them “to cease costly fundraising.” But again, when they reached $100 million, they didn’t stop. Now they have $320 million—a large chunk of which is kept in offshore accounts. Really. It’s on their tax forms.

What is particularly disturbing about the SPLC is the fact that they fail to make any mention of openly violent and hateful group whose been caught time and again laying waste to property and innocent people with whom they disagree.

As Stossel points out:

In return for those donations to SPLC, the world gets a group that now lists people like Ben Carson and Fox commentators Laura Ingraham, Judge Andrew Napolitano and Jeanine Pirro as extremists—but doesn’t list the leftist militant hate groups known as antifa.

Also, any mention of antifa is conveniently absent from this bill as well.

What’s more, as the bill points out:

In November 2017, the Federal Bureau of Investigation released its annual hate crime incident report, which found that in 2016, hate crimes increased by almost 5 percent, including a 19-percent rise in hate crimes against American Muslims. Similarly, the previous year’s report found that in 2015, hate crimes increased by 6 percent. Much of that increase came from a 66-percent rise in attacks on American Muslims. In both reports, race-based crimes were most numerous; more than 50 percent of those hate crimes targeted African Americans.

This number is real. As TFTP reported last year, attacks against innocent Muslims have grown. However, the largest purveyor of hate against Muslims is the United States government. For nearly two decades, the US government has constantly fear mongered about Islamic terrorism and how they “hate our freedom.” But it was America’s foreign policy that has fostered the expansion terrorism—not to mention, fund it.

This constant fear of a “brown boogeyman” coupled with rhetoric about refugees and travel bans has led to an environment in which hate is bred and the US government is the head cheerleader.

The bottom line is that there are undoubtedly crazy people out there who are willing to kill for some cause they think they believe in. There have been horrific incidents of people snapping and killing citizens and police alike. However, it is not the millions of other people who identify as patriots nor the tens of thousands of militia groups that are doing this. Yes, there are hate groups who attack others and the government should prevent that, but lumping everyone in with these groups is not only dangerous but Orwellian.

It is important to note that most people who question the state do so out of a desire to prevent death, not foster it. People who questioned the narrative of weapons of mass destruction in Iraq did so because they wanted to prevent a war in which many would die. However, they were labeled as kooks and conspiracy theorists by the establishment—despite being proven right years later.

This is nothing new.

In fact, in spite having no real reason to go after ‘conspiracy theorists’ and ‘patriot groups’, the government has a long history of infiltrating groups and labeling those who question the status quo as a threat. It even has a name: PATCON, short for “Patriot Conspiracy.”

Indeed, much of the police state which has risen up around the country is in response to the essentially non-existent threat from those who want to expose the crimes of the state who are labeled as extremist groups. YouTube and Google have even gotten in on the action and have moved to censor evidence of US war crimes and historical footage of war.

A police sergeant in Morgan County, Indiana admitted in May of 2014 that his department had obtained an armored vehicle in part because of returning military veterans were deemed domestic terror threats by Homeland Security in 2009.

The MIAC Report, a federal training document famously presented to Missouri police in 2009, went as far as falsely tying supporters of former Presidential Candidate Ron Paul and the Constitution to “extremist groups” as well.

In 2014, a sheriff’s deputy admitted on video that these weapons of war were needed to fend off “constitutionalists” with firearms.

All this bill does is further these previous attacks against those who want peace and freedom and it does so by blurring the lines between real extremists and freedom loving activists. After all, if tyrants can associate hate and extremism with the ideas of peace and liberty—the herd will be far easier to keep under control and will have no problem voting away their rights to fight this non-existent threat.