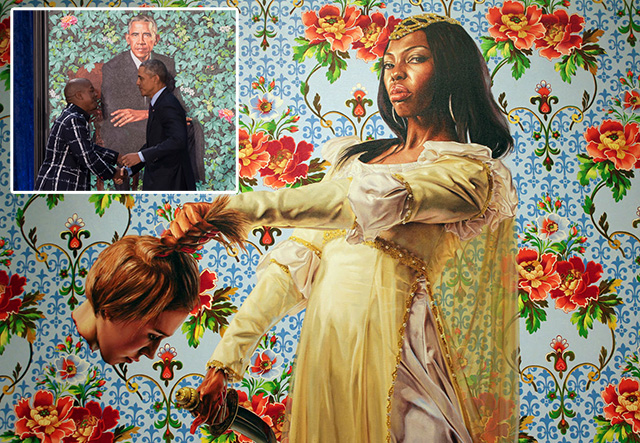 Barack Obama unveiled his official portrait as painted by artist Kehinde Wiley at the Smithsonian’s National Portrait Gallery in Washington DC on Monday.

“Wiley typically portrays people of color posing as famous figures in Western art,” the Portrait Gallery said of his work. “Through this practice, he challenges the visual rhetoric of power that is dominated by elite white men.”

Former US President Barack Obama with his portrait's artist, Kehinde Wiley, after its unveiling at the Smithsonian's National Portrait Gallery in Washington, DC.

Part of challenging the “power” of white people evidently involves angry black women decapitating white women, which Wiley has a fixation for:

Here’s the background on the piece from the North Carolina Museum of Art:

Known for his monumental portraits of young black men, placed in historical poses and settings appropriated from Old Master paintings, Kehinde Wiley critiques the racism of art history while also commenting on contemporary street culture and masculine identity. Reinventing classical portraiture and questioning who is represented in the portraits found in museums worldwide, Wiley states, “The whole conversation of my work has to do with power and who has it.”

Judith and Holofernes is from Wiley’s most recent body of work and his first series of paintings to feature female subjects. Wiley uses “street casting” to find his models—walking city streets and asking ordinary people if they would pose for a portrait. He met the model for this painting, Treisha Lowe, at Fulton Mall, a pedestrian shopping street in downtown Brooklyn. This painting references a specific art-historical work, a 17th-century painting by Giovanni Baglione, Judith and the Head of Holofernes (1608). The subject is taken from the apocryphal Old Testament Book of Judith, in which a Jewish town is under attack by the Assyrian army led by the general Holofernes. Judith, a widow from the town, goes to Holofernes under the pretense of helping him defeat the Jews. After he falls asleep, she cuts his head off with his own sword, and the town defeats the army. Wiley translates this image of a courageous, powerful woman into a contemporary version that resonates with fury and righteousness.

Wiley takes obvious artistic license with the story—Holofernes is represented by a woman’s head, and Judith wears a gown designed by Riccardo Tisci of Givenchy. This new rendition can be interpreted on many different levels, including racial and gender identity and inequity, the representation of women throughout art history, and society’s ideals for beauty. In Wiley’s words, “I am painting women in order to come to terms with the depictions of gender within the context of art history. One has to broaden the conversation . . . This series of works attempts to reconcile the presence of black female stereotypes that surrounds their presence and/or absence in art history, and the notions of beauty, spectacle, and the ‘grand’ in painting.”

Imagine if President Trump had his official portrait painted by a white artist known for his portraits of white women decapitating black women.