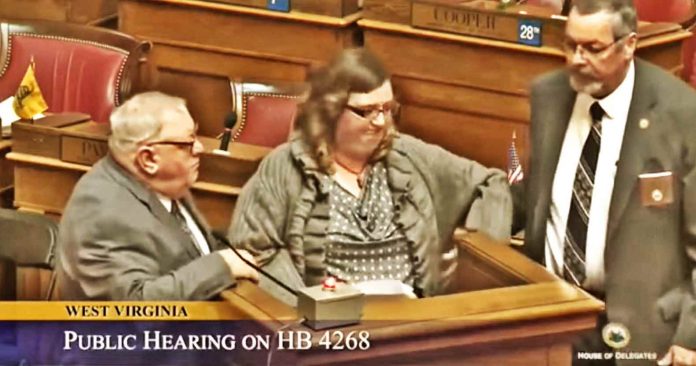 West Virginia — (RT) A candidate for the West Virginia House of Delegates was dragged out of a hearing after listing the donations received by state lawmakers from fossil fuel companies. She was testifying on a bill on oil and gas drilling rules.

Lissa Lucas was criticizing a proposed bill, HB 4268, which would allow oil and gas companies to drill on private land with the consent of just 75 percent of the landowners. Energy companies are currently required to have 100 percent approval from landowners before they can extract gas and minerals from land.

As part of her testimony, she read out the list of names of lawmakers who received sizeable donations from fossil fuel companies. Her testimony elicited a less than warm reception from the legislature.

Lucas was ordered by House Judiciary Committee members to desist from making “personal comments” about members. As Lucas persisted, her microphone was cut off. When lawmakers refused to let her finish speaking, she told them to “drag me off.” Security was called and in a video of the incident she can be seen being dragged from the floor.

“I got dragged out of House chambers … Because I was listing out who has been donating to Delegates on the Judiciary Committee,” Lucas wrote on her blog.

The names include Delegate Charlotte Lane who received 20 percent of her campaign donations from energy firms, and Delegate Jason Harshbarger who received 38 percent, according to Lucas.

Lucas took further aim at the alleged cosy relationship enjoyed by lawmakers and big energy lobbyists. “While lobbyists have the money to buy your time at fancy gatherings like the Wine and Whisky gala at the Marriott on Wednesday—members of the public have been allotted just about two minutes,” Lucas said.

State lawmakers are “getting paid to hand over your property rights to corporations,” Lucas wrote on her blog.

Lucas is a Democratic candidate for District 7 of the West Virginia House of Delegates. She had travelled to the House from her home 100 miles away in Cairo (WV) the previous day to ensure she would make her slot to speak on the issue. “I got [to the West Virginia House of Delegates] early and then I sat outside in the cold and sat on the concrete until they opened the doors, and then I got to the chambers really early,” she told The Intercept.

The bill was passed by the committee and will move to the lower House and state Senate for a full vote.