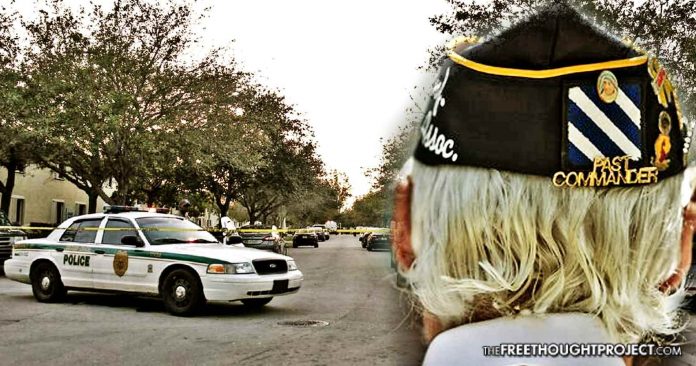 Homestead, FL — An elderly Korean War veteran was gunned down by four police officers in his home on Monday. Raymond Bishop, 84, died inside his home at the Hidden Grove apartments after the veteran had become suicidal over an eviction notice he received because of his service dogs.

“They were throwing him out. He had nowhere to go,” said neighbor Jonathan Rodriguez, who often fed Bishop and took him to the veterans hospital for medical treatment, according to the Miami Herald.

Bishop became despondent after he was slated for eviction for having unauthorized service dogs—a 13-pound pooch named Roxie and a 30-pound one name Ranger.

According to the Herald, a psychiatrist at the Miami Veterans Affairs Medical Center said the dogs had a “tremendously favorable influence” on Bishop. “Mr. Bishop’s pets, in this case, has provided invaluable emotional therapeutic benefit,” Dr. Ernesto Grenier wrote in a letter filed in the court record.

Bishop had been fighting the eviction since July of 2017, however, it all came to an end this week as he was taken out by four Miami-Dade officers who all opened fire.

The news of Bishop’s death came as a shock to his attorney, Christopher Brochyus, of Legal Services of Greater Miami, who had been fighting for the elderly man to keep his apartment for the last six months.

“He was a really nice guy to talk to,” Brochyus said. “He loved his animals.”

According to police, they were responding to a call from a resident who said Bishop had become suicidal and was armed. Police claim to have tried to talk the elderly man down before they opened fire.

“These officers begged this gentleman to put the weapon down,” said Florida Police Benevolent Association President John Rivera. “They had no choice. These are situations officers are confronted with daily, and it’ll remain with them forever.”

Apparently, officers had no other means of disarming the elderly man—like a beanbag gun or a taser.

While Bishop may have certainly pointed the gun in the direction of the officers, no rounds were fired. Also, Americans would be more inclined to believe the account of the officers if not for their horrendously violent track record when dealing with elderly veterans.

Last month, TFTP reported that a police officer who shot and killed an innocent 68-year-old mentally ill veteran who accidentally hit the medical emergency button in his home, would face no consequences after acting U.S. Attorney Joon Kim determined that there was insufficient evidence to press charges.

The victim, Kenneth Chamberlain, accidentally triggered a medical alert through “Life Aid,” which prompted police to visit his home. When the officers arrived unexpectedly, Chamberlain told the responding officers that he was OK and did not need any help. He refused to answer his door, and instead called Life Aid and told them that he did not need the police at his home.

“I have the White Plains Police Department banging on my door, and I did not call them and I am not sick,” Chamberlain told the dispatcher on the phone.

However, the officers refused to leave and initiated a standoff with Chamberlain, allegedly taunting him with racial slurs, according to his family.

“On the recording, the police can be heard calling my father a ‘nigger,’” the family stated.

After insulting him with racial slurs, police kicked in his door, saw him holding a knife, so they tased him, shot him with beanbag rounds and then killed him with a fatal gunshot.

Another cop, Officer Craig Taylor was acquitted after he shot a 95-year-old WWII veteran in the head—point blank—with a bean bag round. But that was only the start, in clear violation of the manufacturer’s instructions, he fired five consecutive shots into the 95-year-old in a matter of seconds.

Last year, TFTP reported on Eugene Craig, an 86-year-old Navy veteran who was gunned down by police as he attempted to shield his wife from armed intruders who’d just broken into his home. The armed intruders were cops.

In the meantime, cops who choose not to kill suicidal men—as they seek to resolve the situation peacefully—are fired.