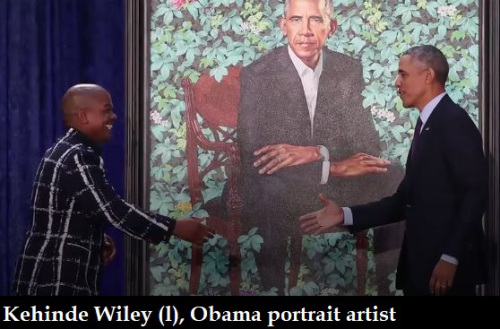 Barack Obama’s portrait by Kehinde Wiley which was unveiled Monday at the taxpayer-funded National Portrait Gallery, is utterly bizarre.

To begin, Obama is depicted with elongated fingers, and an extra finger on his left hand.

Then, there is the matter of Wiley’s specialty of portraying white historical figures, like Napoleon, as black, not to mention his distasteful depiction of the biblical Judith, a Hebrew, as a black woman who beheaded a blonde white woman, instead of an Assyrian general. (See “Obama’s gay portrait artist distorts biblical Judith as a black woman decapitating white people“)

Thanks to the AltMedia (see here and here), our attention is drawn to another bizarre feature in Obama’s portrait: Wiley had slyly painted a sperm on Obama’s forehead.

Below is a side-by-side comparison of sperms (l) and the sperm painted on Obama’s forehead (r):

The openly homosexual Kehinde Wiley is obsessed with sperm. Below is his 2002 untitled oil painting of sperm (source: Artnet Auctions):