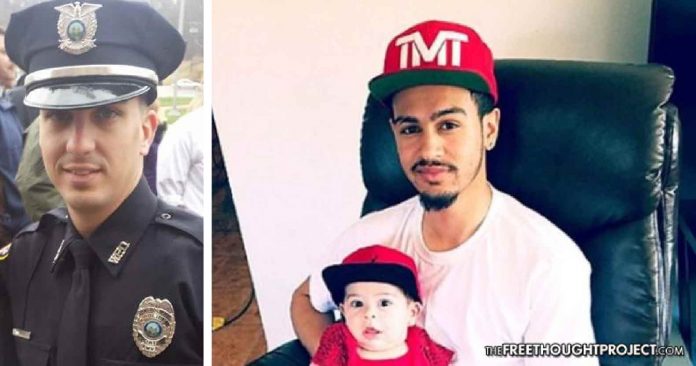 Weirton, WV — As TFTP reported last year, former Weirton police officer Stephen Mader sued the city after he was fired for not killing a suicidal man who needed help.

It was reported this week that Mader will be receiving $175,000 in a settlement as a result of his unnecessary firing.

“At the end of the day, I’m happy to put this chapter of my life to bed,” Mader said. “The events leading to my termination were unjustified and I’m pleased a joint resolution has been met.

“My hope is that no other person on either end of a police call has to go through this again,” said Mader, who still lives in Weirton with his family but now drives trucks for a living, according to WPXI.

As we reported at the time, on May 6, 2016, Mader responded to a domestic call about a suicidal person. When he arrived on the scene, Mader confronted 23-year-old Ronald D. Williams who was armed and mentally distraught.

Madar said that he began talking to the young man in his “calm voice.”

“I told him, ‘Put down the gun,’ and he’s like, ‘Just shoot me.’ And I told him, ‘I’m not going to shoot you brother.’ Then he starts flicking his wrist to get me to react to it.

“I thought I was going to be able to talk to him and de-escalate it. I knew it was a suicide-by-cop” situation,” Mader said, adding that, “He wasn’t screaming, yelling, he wasn’t angry. He just seemed distraught. Whenever he told me to shoot him it was as if he was pleading with me. At first, I’m thinking, ‘Do I really need to shoot this guy?’ But after hearing ‘just shoot me’ and his demeanor, it was, ‘I definitely can’t.’”

Mader showed incredible restraint in the situation, even though Williams was attempting to provoke a suicide by cop.

Sadly, as Mader began to reason with Williams and de-escalate the situation, backup arrived, and another officer immediately shot and killed Williams without a second of consideration.

To add insult to injury, Mader was fired for his restraint, and the officer who murdered Williams was cleared of all wrongdoing, showing that the police department is explicitly encouraging indiscriminate killings.

Now, Mader is understandably reconsidering his career choices and has filed a lawsuit against the city that employed him.

“I loved being a police officer. And for them to say because of this incident you’re not going to continue here was heartbreaking. It had me questioning myself, should I be an officer,” Mader told NBC.

West Virginia attorney and ACLU representative Timothy P. O’Brien is helping to bring the lawsuit against the city.

“The City of Weirton’s decision to fire officer Mader because he chose not to shoot and kill a fellow citizen, when he believed that he should not use such force, not only violates the Constitution, common sense and public policy but incredibly punishes restraint.

When given the tragic and far too frequent unnecessary use of deadly force, such restraint should be praised not penalized. To tell a police officer, when in doubt either shoot to kill or get fired, is a choice that no police officer should ever have to make and is a message that is wrong and should never be sent,” O’Brien said.

“There’s the thin blue line, and one of the ironies of this case is that as we’ve seen across the county how many instances police have used deadly force in circumstances where that force is questioned, but nothing is ever done. In most cases, you don’t see training or suspension. When you contrast with what Officer Mader did and how he’s been treated, and officers who’ve used deadly force and how they’ve been treated, it speaks volumes to why we have a problem with deadly force in this country,” O’Brien added.

Mader has no regrets and still believes he did the right thing.

Shooting and killing suicidal or mentally distraught people sadly seems to be the standard operating procedure for police across the country. We have covered countless cases over the years where officers have indiscriminately killed suicidal people instead of helping them out.

Obviously, if a family member makes a phone call to police because a loved one is suicidal, the last thing they want is for someone to get hurt, but when police arrive the situation tends to escalate quickly and result in violence.