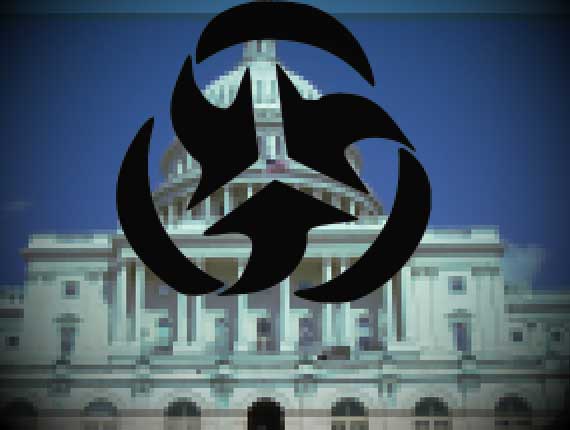 Note: I wrote this article long before Donald Trump appeared on the scene. Love him, hate him, trust him, don’t trust him, he has spoken against Globalism and for Nationalism. Those sentiments have taken hold and reverberated across the planet, crossing swords with Elites who are bent on destroying separate nations and ruling one collectivist world from above. Therefore, whether or not Trump means what he says, he must be taken down. The genie must be put back in the bottle.

Who is in charge of destroying economies?

The conversation revealed that the entire basis of the US Constitution had been torpedoed, that the people who were running US national policy (which includes trade treaties) were agents of an elite shadow group. No question about it.

US economic and political policy run by a committee of the Trilateral Commission—the Commission had been created in 1973 by David Rockefeller and his sidekick, Zbigniew Brzezinski.

How does a shadowy group like the TC accomplish its goal? One basic strategy is: destabilize nations; ruin their economies; send millions and millions of manufacturing jobs off to places where virtual slave labor does the work; adding insult to injury, export the cheap products of those slave-factories back to the nations who lost the jobs and further undercut domestic manufacturers, forcing them to close their doors and fire still more employees.

And then solve that economic chaos by bringing order.

What kind of order?

Eventually, one planet, with national borders erased, under one management system, with a planned global economy, “to restore stability,” “for the good of all, for lasting harmony.”

The top Trilateral players, in 2008, had their man in the White House, another formerly obscure individual like Jimmy Carter: Barack Obama. They had new trade treaties on the planning table.

After Obama was inaugurated for his first term, he shocked and astonished his own advisors, who expected him, as the first order of business, to address the unemployment issue in America. He shocked them by ignoring the number-one concern of Americans, and instead decided to opt for his disastrous national health insurance policy—Obamacare.

Obama never had any intention of trying to dig America out of the crash of 2008. That wasn’t why he was put in the Oval Office. He could, and would, pretend to bring back the economy, with fudged numbers and distorted standards. But really and truly, create good-paying jobs for many, many Americans? Not on the TC agenda. Not in the cards.

It was counter-productive to the TC plan: torpedo the economy further.

Eight years later, along came Trump. Judge him in any way you want to. At the very least, he became a symbol for dismantling Globalism. And that was enough to trigger alarm bells in Elite circles and centers. And the word went out: destroy Trump by any means necessary.

Put the Trilateral Plan back on track—make the whole world One Nation, and erase the memory of America…

So that, one day, a student will ask his teacher, “What happened to the United States?” And the teacher will say, “It was a criminal enterprise based on individual freedom. Fortunately, our leaders rescued the people and taught them the superior nature of HARMONY.”