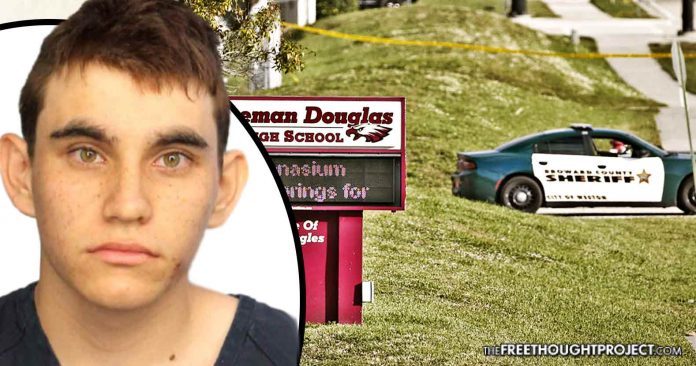 Parkland, FL — Another tragic mass shooting has taken place on American soil in which a deranged coward opened fire on innocent adults and children alike, taking many of their lives in the process. As the details unfold about the history of the shooter and the foreknowledge of his threats to both law enforcement and the school, it appears that the American police state is an utter failure at preventing the tragedies it was ostensibly built to stop.

Everything that was supposed to prevent this tragedy from happening was in place and unfolded as it was designed to do. Nikolas Cruz was reported to the FBI by citizens for publicly declaring that he wanted to become a “Professional School Shooter.” However, the FBI apparently chose not to act on that information.

What’s more, according to Broward County Sheriff Scott Israel, to ‘protect’ the students of Marjory Stoneman Douglas High School, an armed officer was on campus as the shooting began. However, according to Israel, the officer never encountered the suspect. Exactly how a police officer, who was already on the scene and whose job was to protect the students, was unable to even encounter the shooter remains a mystery.

During a press conference on Thursday, Sheriff Israel, at least three times, claimed police need “more power” to prevent such tragedies. He urged neighbors to spy on each other and report each other to the police if they see anything out of the ordinary.

One of the reason police need more power, according to Israel, is to go after those who make such ominous posts on social media. But they already have this power.

As TFTP has reported on numerous occasions, people have been arrested and thrown in jail for saying things far less threatening than shooting up a school.

In Flint, Michigan, Activist Christopher G. Wahmhoff, 37, was charged in 2016—not for saying he was going to shoot up a school or kill cops—but for a Facebook post referencing a protest against the Flint water crisis.

Before that, 26-year-old Kristin Holmes was arrested and charged with a crime for posting of a photo of herself with a handgun.

Holmes was charged with harassment by computer after a case of mistaken identity escalated into a Facebook comment feud.  A woman had reportedly mistaken Holmes for someone else and made some comments Holmes found offensive, so the young woman posted a selfie of herself playfully pointing a weapon at the camera along with the caption, “I’ll post a few actual pics of me so you know the difference when you come find me.”

Seventeen-year-old Osiris Aristy was arrested in 2015 after posting a Facebook status using the police officer emoji and the gun emoji. There was no written threat included in the post we found. The arrest warrant was obtained after “routine Facebook monitoring” found that Aristy had posted selfies with guns, selfies with marijuana joints and emojis “threatening to kill cops.”

Priscilla Villarreal simply reported a story on Facebook before the police did, so, she was arrested and charged with two felony counts of “misuse of official information,” stemming from her reporting on a Border Patrol agent’s suicide last April.

No direct threats were made to anyone and the people in the above scenarios were still arrested and charged. On the contrary, seven months ago, Cruz wrote, “I am going to kill law enforcement one day they go after the good people,” in the comments section of a video clip from the NatGeo show “Alaska State Troopers: Armed and Dangerous” that was posted on YouTube.

He also said he’s going to be a “Professional School Shooter.”

Cruz also posted photos of dead animals and bragged about killing them on his instagram. By all measures, this kid threw up every single red flag and set off every single warning there is—people reported this to law enforcement—and nothing.

No arrests. No questions. And, all of this was in spite of the Florida law called the Baker Act which allows for involuntary examination which can be initiated by judges, law enforcement officials, physicians, or mental health professionals.

Police in Florida already had more than enough power and help from citizens to stop this tragedy, but they didn’t use it. How on earth would giving them more power solve this problem?

So, what’s the answer? Should we just hand over more power to the police who demand it? Should we put more cops in schools? Should we ban guns?

The answer to the problem of mass shootings lies not in the reactionary nature of the above questions. As we’ve seen over the years, building a police state through a problem, reaction, solution methodology does little to prevent future tragedies as they go after the symptoms instead of the cause.

In America, instead of attempting to understand the psychological triggers of mass shooters—and the potential pharmaceutical chemical imbalance that caused them to snap—tragedies are exploited for political gain, used to passed legislation, and pushed to stoke political divide.

The reality is that no amount of police state will ever prevent future tragedies and until we focus on the cause—instead of the symptoms—the problem will only persist.