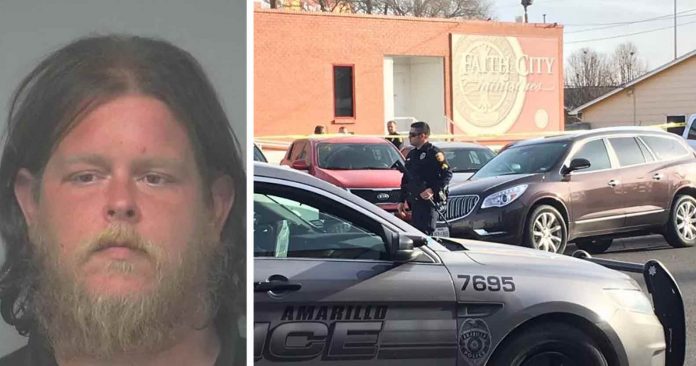 Amarillo, TX — As news of the tragic shooting in Parkland, Florida dominated the airwaves this week, a massive hostage situation—which was quickly turning into a mass shooting situation—was foiled by a hero in a church. That hero, however, is now in the hospital after police showed up to the scene and shot him.

The situation was well on its way to becoming one of the deadliest shootings in history as the gunman took over 100 people hostage inside the Faith City Mission church on Wednesday.

“They said there was a gun in the building everyone started running all different ways,” said Clay Murdock, a student at Faith City Mission.

According to WLOX, Murdock said he tried to get as many people inside their sound room as possible.

Murdock then ran outside.

According to the Amarillo police, the initial call came in around 8:45 a.m. and indicated that there was an armed suspect inside who was holding 100 people hostage.

Sergeant Brent Barbee told reporters that when officers breached the building, they encountered an individual who had a handgun.

“The officers fired shots that struck the man,” said Barbee. “After some additional investigation, they’ve learned that the man that [had] the gun may have taken the firearm away from the original suspect in the call. The man who originally had the gun has been taken into custody.”

Later that day, police clarified that they indeed shot the wrong man.

“The initial investigation indicates that the man the officer shot had originally been in a struggle with the original suspect and had taken away the gun from the suspect. The initial suspect has been taken into custody and is not injured. No other persons were hit by gunfire. This is very early in the investigation and more details will be available at a later time,” read the report.

As Amarillo.com reports, the hero of the story is a student at Faith City Mission church. After he and the private church security officers wrestled the shooter to the ground and got the gun away from him, one or more Amarillo police officers opened fire on the student.

“Members of the security team took the gunman down and one of our students was able to wrestle the gun away,” she said. “Our thoughts are with our injured student and we praise God for his protection while honoring the heroic actions of our security team, students and everyone else involved — which prevented the situation from becoming far worse.”

The student was taken to a local hospital. The gunman, Joshua Len Jones, 35, of Amarillo was taken to jail unharmed.

Faith City Mission Executive Director Jena Taylor said the student, who was not identified, had surgery Wednesday but was in stable condition and remains hospitalized, reports Amarillo.com.

“One of our staff members visited the student that was shot and he is resting well after surgery,” Taylor said.

Predictably, this story received no coverage in the mainstream media as it is showed brave citizens in a positive light while highlighting the fact that cops shot and nearly killed the hero.

Please share this story with your friends and family to spread a bit of good news in what has surely been a tragic week of reporting.